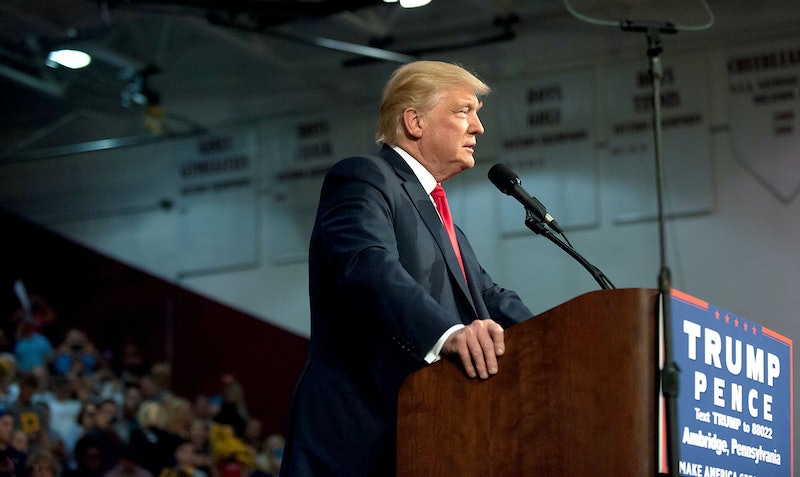 The one thing we can all agree upon about our new president is that he’s unpredictable, so it remains to be seen just what he’ll prioritize once he takes office—let alone what he’ll actually be able to accomplish (as with any freshman POTUS). Here, what’s most likely to take place based on his own words, those of his key advisers and the stance of the legislators he’ll be working with.

Trump's not a big believer in climate-change science, and he's expected to do his best to pull back on Obama's environmental efforts. Fortune predicts Trump will dismantle the Clean Power Plan, the Obama administration's attempt at cutting carbon emissions—though this undertaking could take years. He's also expected to attempt to pull out of global climate pacts, though Politico reports his daughter Ivanka may be able to convince him otherwise. And Scott Pruitt, Trump's pick to head up the Environmental Protection Agency, validated climate-change science in his confirmation hearings.

Trump has pledged to repeal Obama's Affordable Care Act and to replace it in a timely manner. While the first part of that promise is already under way, the details of the second half remain uncertain. Politico outlines the challenge that lies ahead for our new president with respect to health care as follows: "Devising a plan that satisfies conservative Republicans implacably opposed to a major federal role (or expense) in health care, while winning over at least eight senate democrats needed to pass legislation, will be daunting—especially without upending his own base by taking health coverage away from 20 million people."

It is likely if not certain that Planned Parenthood will be defunded federally. It is also likely that Trump will appoint pro-life justices to the Supreme Court, which could result in the overturning of Roe v. Wade. At the very least, it's likely that American women will face greater challenges in securing access to safe and legal abortions, as well as the affordable family planning, birth control and health care services provided by Planned Parenthood.

The prospects for Trump's Mexico border wall remain uncertain, as the project would cost tens of billions of dollars (and even some Republican legislators don't support the plan). As far as deportations go, no one really knows what's about to happen. Trump could begin mass deportations as promised, though his pick to lead the Department of Homeland Security, Gen. John Kelly of the Marines (who will oversee immigration enforcement) expressed less extreme views than Trump in his confirmation hearings. Trump is also expected to shake things up with respect to DACA (Deferred Action for Childhood Arrivals), Obama's deportation relief program that has issued work permits to hundreds of thousands of immigrants.

According to Fortune , it's likely the tax code will be changed to encourage or compel companies to repatriate earnings. Revenue from this policy change will fund the tax cuts Trump has promised. Legislation is not likely to be prioritized until after changes to the Affordable Care Act have been made.

Trump purportedly plans to pull out of the Trans-Pacific Partnership (TPP) and renegotiate NAFTA, the North American Free Trade Agreement (and he promises to pull out of that one, too, if new terms don't meet his expectations). Many countries have expressed concerns about these potential changes—here are some details on how they may impact foreign economies worldwide.

Trump rankled EU members with comments this week that asserted the North Atlantic Treaty Organization (NATO) was "obsolete" and "a vehicle for Germany." That said, Trump doesn't appear to have plans to pull out of NATO, as he has threatened in the past. Further, his defense secretary, James Mattis, appears to support the alliance.

With respect to America's relationship with Russia, Mattis said in confirmation hearings that there are an "increasing number of areas where we're going to have to confront Russia."

According to Fortune , China is predicted to test Trump early on with respect to America's Asian allies—which the President has said should be more responsible for their own defense—by getting aggressive around the Senkaku Islands, an archipelago in dispute between Japan and China. Meanwhile, China is aiding the escalation of tensions between South Korea and North Korea by continuing to help North Korea develop nuclear weapons while actively discouraging the former from defending itself. North Korea itself has threatened to test missiles on the US in 2017, and even specifically said they would drop a nuclear bomb on the inauguration. Many are calling this situation Trump's top national security priority, though the President has been semi-blasé in response to the North Korean leader's statements, stating on Twitter, "It won't happen."

Finally, Trump has criticized Obama's Iranian nuclear deal, and may move to scrap it. Mattis, however, does not appear to agree with him on this count, so this remains a wild card.