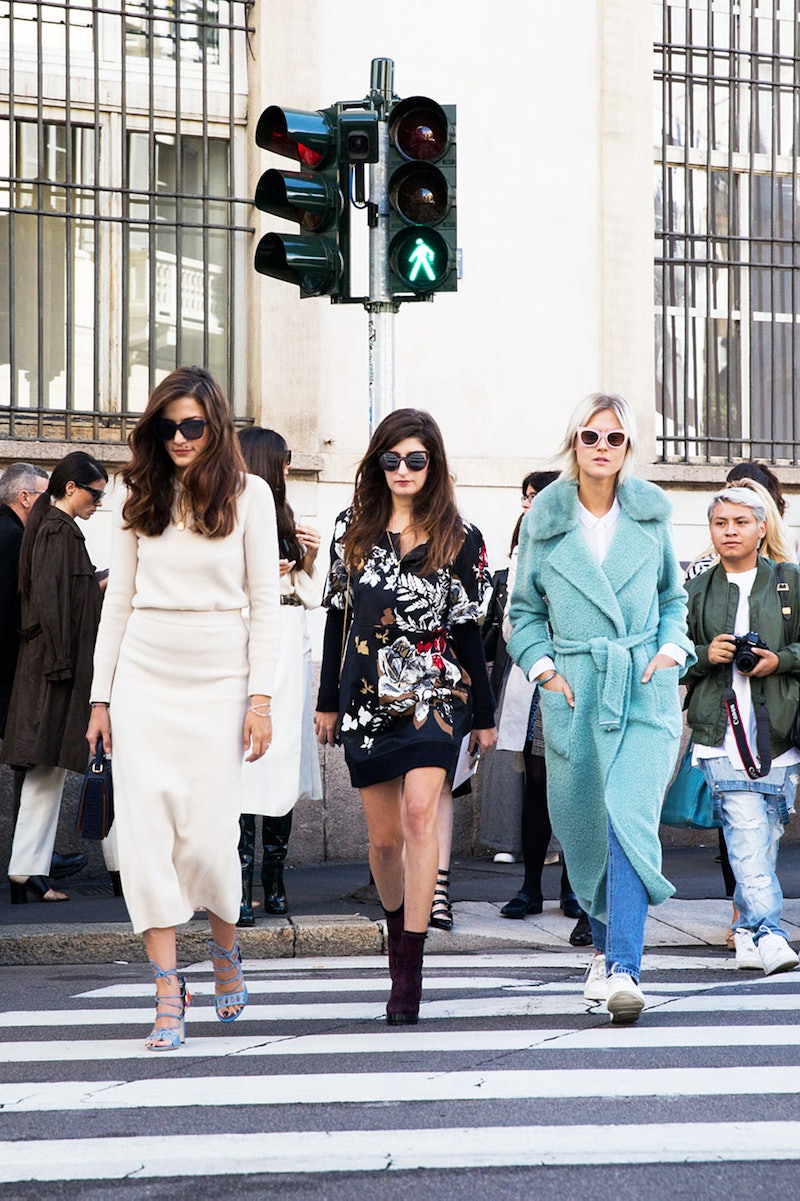 No matter your politics, there’s a lot at stake for women with this year’s presidential election. With all the noise and, well, politicking, it can be hard to figure out exactly where each candidate stands on the issues that will affect women’s health, rights and other issues for decades to come. To help you in this endeavor, we’ve done our best to sort through the melee and pinpoint exactly where each candidate stands on some of the most pertinent women’s issues in this race. Click through to learn more on what the four remaining presidential hopefuls believe with respect to family leave, Planned Parenthood and more.

In January, Congress voted for the 11th time to strip Planned Parenthood of federal funding, though Obama vetoed the bill. Many conservatives oppose Planned Parenthood because the organization performs abortions, though abortion patients don't actually receive any of the federal funding, as they are required to pay for the procedure out of pocket. The opposition, therefore, tends to be more ideological nature. Planned Parenthood says that only 3% of the services they provide include abortions, with the rest of the organization's resources going toward things like STD testing and treatment, contraception, and cancer screening. Here is what The Washington Post uncovered while investigating this claim.

Where The Candidates Stand On Planned Parenthood

Hillary Clinton: Planned Parenthood has officially endorsed Clinton, which is the first time the organization has ever backed a primary candidate. In regard to this decision, Planned Parenthood president Cecile Richards told Time , "Hillary Clinton is a longstanding champion of women's health and women's rights and not just planned parenthood: equal pay, access to birth control, access to safe and legal abortion." According to HillaryClinton.com, the nominee's stance on Planned Parenthood is as follows: "Women's personal health decisions should be made by a woman, her family, and her faith, with the counsel of her doctor. Clinton will stand up to Republican attempts to defund Planned Parenthood, which would restrict access to critical health care services, like cancer screenings, contraception, and safe, legal abortion. She will fight to protect the Affordable Care Act, which bans insurance companies from discriminating against women and guarantees 47 million women and counting access to preventive care."

Ted Cruz: As senator, Cruz voted to defund Planned Parenthood. According to TedCruz.org, "If Ted is elected president, he will instruct his Attorney General to investigate Planned Parenthood on day one." For more on his views, check out this op-ed piece he wrote for USA Today last fall.

John Kasich: Last month, Ohio Governor John Kasich signed a bill blocking his state from contracting for health services with any organization that provides abortions. This law will prevent more than $1 million in funding from going to Planned Parenthood. See more on his stance on Planned Parenthood here and here.

Bernie Sanders: Sanders got into some hot water earlier this year when he called Planned Parenthood "part of the establishment" in response to their endorsement of Clinton; however, this poor choice of words does not mean he doesn’t support the organization. Here is his official stance, according to BernieSanders.com: "We are not going to allow the extreme right-wing to defund Planned Parenthood, we are going to expand it. Planned Parenthood provides vital healthcare services for millions of women, who rely on its clinics every year for affordable, quality health care services including cancer prevention, STI and HIV testing and general primary health care services. The current attempt to malign Planned Parenthood is part of a long-term smear campaign by people who want to deny women in this country the right to control their own bodies."

Donald Trump: Trump has said he believes Planned Parenthood "does wonderful things" with respect to women's health, but he does not believe the abortions they do should be funded. "The problem that I have with Planned Parenthood is the abortion situation. It is like an abortion factory, frankly," Trump told CNN. "That should not be funded by the government, and I feel strongly about that. What I would do when the time came, I'd look at the individual things they do, and maybe some of the individual things they do are good. I know a lot of the things are bad. But certainly the abortion aspect of it should not be funded by government, absolutely."

America is one of three countries in the world with no paid family leave law (the other two are Papua New Guinea, where cannibalism still exists, and Oman). There are some protections for new parents in terms of unpaid leave thanks to 1993's Family and Medical Leave Act, which allows workers to take off up to 12 weeks with new babies, unpaid, without losing their jobs; however, the percentage of Americans who can afford to lose three months of income is low, and because of certain parameters to the law (the workplace must have over 50 people to be required to follow it), it covers only 60% of workers to begin with. In recent years, both New Jersey and California have passed laws requiring six-week, partially paid family leave that they funded through a small payroll tax. Results have shown that women who took advantage of this leave were a lot more likely to have not dropped out of the workforce 9 to 12 months after having a baby, and they were also 39% less likely to be reliant on public assistance of any kind.

Where Candidates Stand On Family Leave

Hillary Clinton: According to her website, if elected, Clinton will push for government-mandated 12 weeks of paid family and medical leave. "It's about time we had paid family leave for American families and join the rest of the world," she said at the first Democratic debate. Read more about her plan here.

Ted Cruz: Cruz isn't talking much about this issue, but he did say this last fall: "I think maternity leave and paternity leave are wonderful things. I support them personally. But I don't think the federal government should be in the business of mandating them."

John Kasich: Earlier this year, Governor Kasich said that maternity leave is responsible for the gender pay gap and that what women really need is the ability to work from home (as opposed to getting paid time off). Put another way, he believes that it should be up to the employer to figure out how to work with new families, as opposed to having any policies mandated by the government.

Bernie Sanders: Sanders also plans to institute 12 weeks of paid family and medical leave for workers, and as a senator, he cosponsored the FAMILY Act, which does just that. He aims to pay for this through an insurance program that employees would pay into each month "for the price of a cup of coffee." Read more about his voting record on paid leave here.

Donald Trump: Information on Trump's stance on family leave is scarce. It's not mentioned on his website, and when asked about it by Fox Business last year, he replied, "It's something that's being discussed. I think we have to keep our country very competitive so you have to be careful of it, but certainly there are a lot of people discussing it." He has, however, said that companies can "very easily" implement child care programs for their employees' children.

The Issue: The Pay Gap

According to the Bureau of Labor Statistics, women still earn 78 cents to a man's dollar in the US workforce. The reasons for this are complicated, with some suggesting it has more to do with the fields women enter than discrimination, while others say that even when adjusting for this factor, the wage gap persists. Since 2012, women have raised their pay by 1.5 cents, but in the last decade growth has been more or less stagnant. There are arguments to be made for the positive ways in which raising minimum wage (see slide #7) and mandating paid family leave would impact this problem, which tie into some of the candidates' position on this issue and the others.

Where The Candidates Stand On The Pay Gap

Hillary Clinton: Clinton supports the creation of laws that will crack down on those who persecute employees for talking about their pay, with the intended result being the shedding of light on pay gaps women might face in their workplace. She also promises to support the Paycheck Fairness Act, which she introduced as senator.

John Kasich: Kasich hasn't taken a formal stance on the pay gap per his website, but when asked about it last fall, he responded, "Well, a lot of it is based on experience. A lot of different factors go into it. It’s all tied up in skills. Do you not have the skills to be able to compete?"

Donald Trump: Trump doesn't have an official line about the gender pay gap, but in response to one woman's assertion that she wanted to make the same pay as a man, he said, "You're gonna make the same if you do as good a job."

Around two-thirds of minimum wage workers are women, a claim investigated here by Politifact. The Economic Policy Institute estimates that if the minimum wage were increased to $12 per hour by 2020, more than 35 million workers would get a raise, and of those, 55.9% (or 19.6 million) are women. This increase would allegedly be enough to pull a family of three out of poverty.

Where The Candidates Stand On Minimum Wage

Ted Cruz: In 2014, Cruz voted against the Minimum Wage Fairness Act, which would've raised the federal minimum wage to $10.10. Last June, he said, "The undeniable truth is if the president succeeded in raising the minimum wage, it would cost jobs from the most vulnerable."

Bernie Sanders: Sanders believes the minimum wage should be raised to $15 an hour. Read more on his plan—and how it differs from Clinton's—here.

Donald Trump: Trump clarified his position on the minimum wage late last year, stating that he already thinks wages are too high for the US to compete globally. "But taxes too high, wages too high, we're not going to be able to compete against the world," he said in a November 10 debate. "I hate to say it, but we have to leave it the way it is. People have to go out, they have to work really hard and have to get into that upper stratum. But we cannot do this if we are going to compete with the rest of the world."