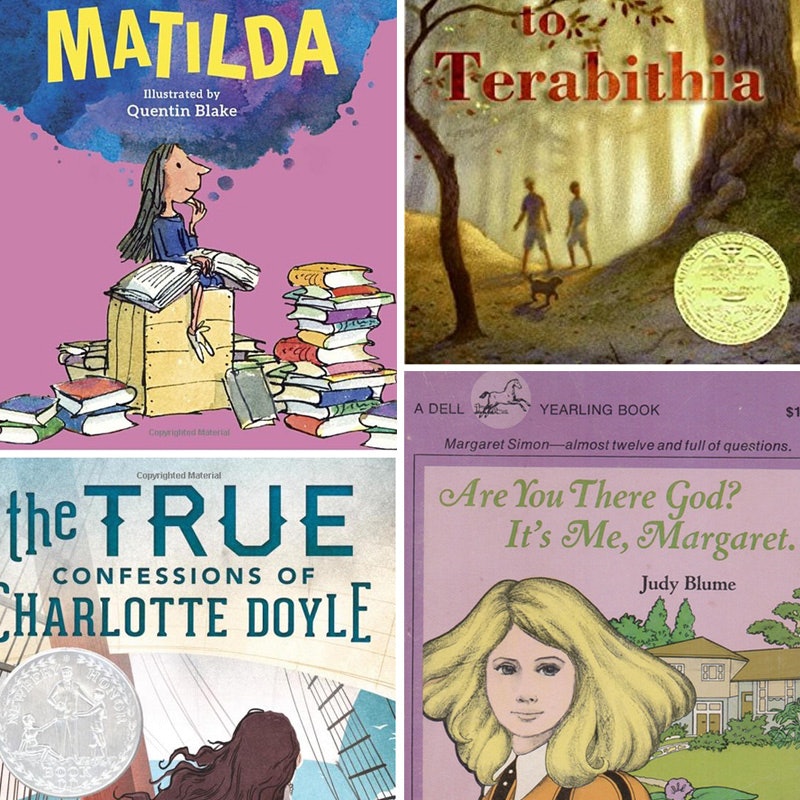 When we were kids, we remember books as having an almost magical property—since then, though we still read, our Netflix accounts have largely replaced our libraries. This is a shame, as reading has been shown to make you more empathetic, and if there’s one thing our crazy world needs right now, it’s an influx of empathy. So, we thought we’d revisit some of the beloved written treasures of our youth in order to reignite the spark we once felt for those printed pages. Here, 15 nostalgia-inducing tomes you should re-read, stat.

The Westing Game by Ellen Raskin

If you're an entertainment industry executive reading this, we implore of you to re-read this book and consider remaking it into a film (it was first made into a 1997 film called Get A Clue). A Newbery Medal-winning book, The Westing Game contains all of the requisite elements for box office success—a spunky, female protagonist (named Turtle Wexler), mystery and intrigue, and 16 incredibly well-drawn characters. The story revolves around the will of millionaire Sam Westing, in which the aforementioned 16 people are named. The potential heirs are paired up and given clues towards a puzzle—who killed Sam Westing?—that must be solved in order for them to inherit Westing's money. Sure, you'd have to figure out how to make the clues a touch more difficult to decipher given we now have Google, but we can't help but fantasize about what Wes Anderson could make of this masterpiece.

Island Of The Blue Dolphins by Scott O'Dell

Island of the Blue Dolphins is a fictional retelling of the real-life story of Juana Maria, a Nicoleño Native American girl who lived alone on San Nicolas Island (off the California coast) in the 19th century... for 18 years. If you think The Hunger Games' Katniss Everdeen is a badass, you should revisit this book ASAP.

Island of the Blue Dolphins, $6

This celebration of the three books in the Wayside School series, published in The Atlantic, writes a more poetic love letter to them than we ever could, so we highly recommend giving it a read if you were also a fan of the books as a child. Wayside School, the setting of all three stories, is a surreal elementary school, built 30 stories high with one classroom on each floor, that also happens to be missing its 19th floor. Strange things happen at this school, but they're not really remarked upon as being strange by the characters, which gives the books a delightfully unnerving effect. If you want to be suddenly transported back to the time at which you first read this book, when your young, untested self was trying to navigate an environment that likely mostly felt strange and wonderful to you, we suggest you order yourself a copy of this book, stat.

Anne of Green Gables was published in 1908 and saw success at the time comparable to that experienced by Harry Potter—we love this sweet dedication to the book by The Handmaid's Tale author Margaret Atwood. Anne of Green Gables tells the story of a fiery orphan, Anne Shirley, who goes to live on a farm on Prince Edward Island, and the book series that followed this debut novel traced her transformation into a woman. If you loved Anne of Green Gables as much as we did, author Lucy Maud Montgomery's book The Story Girl is also most certainly worth a read or re-read.

The True Confessions Of Charlotte Doyle by Avi

The True Confessions of Charlotte Doyle sees another young female protagonist left to fend for herself, though this time the story's heroine finds herself alone onboard a ship of all men back in the early 1800s, when this would have been a frightening and extraordinary occurrence. She eventually joins the ship's crew in mutiny, a bold choice which forever alters her life.

The True Confessions of Charlotte Doyle, $7

Every book Roald Dahl ever wrote is a gem, but we hold a special place in our hearts for Matilda, which tells the story of a precocious yet ill-treated child who uses magical powers to exact revenge on those who have wronged her.

Why so many children's books revolve around murder and other darkness, we don't know, but our young and innocent hearts loved them nonetheless. This oddly compelling book tells the story of a girl whose dolls come to life in order to help her solve the murder of her great-grandparents.

A Wrinkle In Time by Madeline L'Engle

This book is, again, terrifying, and yet it somehow seemed less so when we were young. It tells the story of a young girl and her precocious baby brother, who are sent to a faraway planet to retrieve their father, who's been imprisoned by a dark force which threatens to take over the universe. It won the Newbery Medal in 1963, continuously makes "best of" book lists, and is currently being adapted into a film starring Oprah and penned by the author of the Frozen screenplay.

Roll Of Thunder, Hear My Cry by Mildred D. Taylor

The Wikipedia entry for this Newbery Medal-winning book says that it takes place in the Depression-era South, when "racism was still common." Given that racism is actually still common nearly 100 years later all over America, this book is a must-read for all. The book's protagonist is a young girl who learns—the hard way—the reason her family so values ownership of land.

Jacob Have I Loved by Katherine Paterson

Jacob Have I Loved tells the moving story of Sara Louise, whose twin sister Caroline is favored for being prettier and more talented. The Newbery Medal-winning book traces Sara Louise's journey to forge her own identity and find her own sense of self in the wake of a challenging childhood.

Remember Me by Christopher Pike

We absolutely loved Christopher Pike, and now that we think about it, were probably reading him when we were much to young to fully understand the fairly adult storylines contained within his books. Remember Me was one of our favorites—its protagonist is a recently-murdered teenage girl who sets out to prove she didn't commit suicide.

Behind The Attic Wall by Sylvia Cassedy

If you ever played pretend as a child—most notably to escape from less than ideal surroundings—you will inevitably relate to Behind the Attic Wall. The story's protagonist is a young foster child whose dolls come to life, providing her with a surrogate family and helping her to heal in the process.

Behind The Attic Wall, $1

Bridge to Terabithia by Katherine Paterson

Tearjerker alert! If the movie My Girl broke your heart, be wary of this Newbery Medal-winning book, which deals with some of the same themes. We can't even write about what happens here without tearing up, so you'll have to read, or re-read, the book for yourself to find out!

Number The Stars by Lois Lowry

This story revolves around a young Danish girl who helps her Jewish friend escape the Nazis during World War II. In this genre, we also love The Book Thief and The Devil's Arithmetic, and we can't help but wonder if kids these days are still being exposed to the Holocaust through fiction in the way we were back then. These books are a must-read for everyone!

Are You There, God? It's Me, Margaret by Judy Blume

No list of young adult fiction would be complete without this entry, and to be honest, we're still repeating "I must, I must, I must increase our bust!" in our heads, with hope, all these years later. Blume wrote about all of the things our parents were too embarrassed to cover with us, and it's a shame her books have been banned from many a library over the years as a result—the author has said that women often cry when they meet her, so touched are they by her impact on their young womanhood.