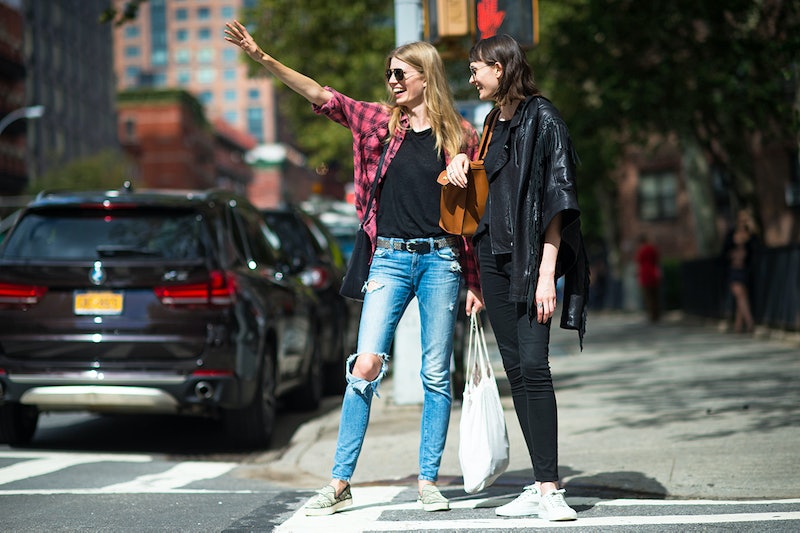 Not long ago, it was common practice for entertainment executives to utter the words “women aren’t funny” when pitched any idea that relied on female writers, comics or actors for its execution. These days, you’d have to be living under a rock to believe that. Funny ladies—from Tina Fey to Mindy Kaling to Amy Schumer—are everywhere, monopolizing magazine covers, awards shows and big screens. We’re obsessed with them all and can’t get enough of the content they’re creating (if you haven’t read Kristin Newman’s book What I Was Doing While You Were Breeding or watched Broad City yet, you must ditch work and do so immediately). In fact, there are so many talented women creating comedy right now that it was incredibly difficult for us to create this list, so consider these 6 just a starting point.

Jay Leno described Cameron as "the future of comedy," and it's easy to see why. She's political but accessible, and her act often involves her fiancé, fellow comedian Rhea Butcher, which adds an undeniable aw factor to the material. Cameron and Rhea's original sitcom, “Take My Wife,” will be a part of NBC’s new comedy streaming channel SeeSo, which launches in January.

Maria may not technically count as one-to-watch given she's not exactly new or underground at this point (she won the 2014 American Comedy Award for Best Club Comic and was featured on season three of Louie). But we had to include her on this list, because she’s so freaking funny that we listen to her comedy album, Ask Me About My New God, on repeat and yet somehow none of our friends have heard of her. Netflix announced this summer that it had ordered 13 episodes of her new sitcom Lady Dynamite, which is "about a woman who loses her sh*t and then finds her sh*t" and is based on Maria's own sometimes (somehow) hilarious struggles with bipolar disorder. We can't wait.

Listen: Ask Me About My God

The New York Times calls Kate Berlant's style of comedy "experimental," and as such it may not be for everyone. She doesn’t exactly tell jokes, per se, but more so delivers speeches that include quietly brilliant lines (referring to the plight of women) like "forced into an economy of paying for your own subjectivity." Her act is both understated and theatrical at the same time, evoking more of a "wow, that was genius" smirk than an outright laugh.

Phoebe has a blog called Blaria, which is about "seeing the world through the eyes of a black Daria.” She also writes for “White Guy Talk Show,” does hilarious TV recaps for everyone from Glamour to Vanity Fair and is a stand-up comic to boot.

Watching Joselyn’s “DIY Damnit!” is like watching Martha Stewart say all the things you imagine she really wants to say while spending way too much time on crafting something no normal human would be patient enough to see through to completion. Her book, “DIY Damnit: A Practical Guide To Curse-Free Crafting” releases in November, and you’d better believe we’ve pre-ordered it.

Aparna, the first-ever Indian-American woman to perform stand-up on late night television, has one of the funniest Twitter feeds out there. She also wrote and performed for Totally Biased with W. Kamau Bell and recently recorded her first live album, which we’re awaiting with baited breath.