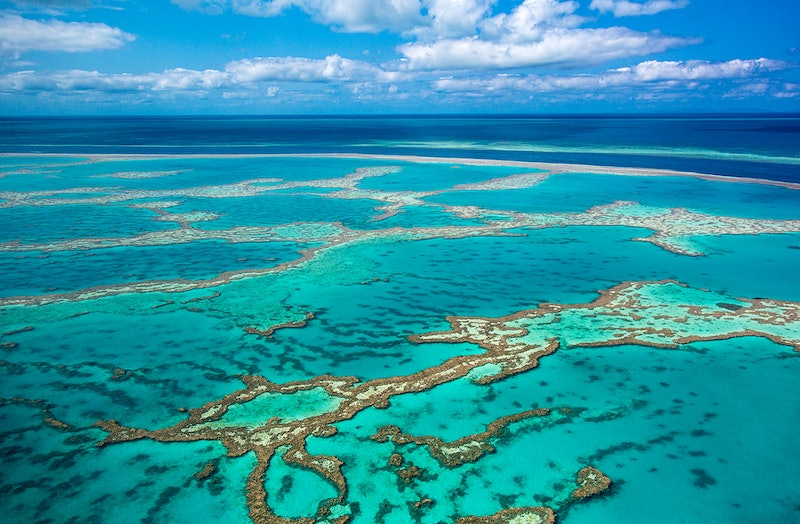 Though we’re doing our best to remain positive in the wake of recent news, we can’t help but fantasize constantly about running away to a secluded beach somewhere, turning off our phones, and trying to figure out how to stay lost forever. (Note: science has shown that exposure to “blue space,” like a body of water, actually lowers psychological distress.) It’s in this spirit that we’ve collected a list of the best beaches in the world to which you should be planning an escape, if only in your imagination. Here, nine of the most beautiful beaches you didn’t know you should visit (but should, and stat). Share your favorite beach in the comments below!

This has been ranked as the fifth best beach in the world according to TripAdvisor, and yet few in our circles have ever heard of it. It's located on Whitsunday Island, but the sand found on Whitehaven is inexplicably different (read: better) than that of sand found elsewhere on this Australian-owned piece of water-encircled land. If you hike up to Hill Inlet lookout, you'll be greeted by breathtaking views. Many Australians make quiet, pristine Whitehaven a camping destination, and what better way could there be to wake up?

How to get here: You can fly to the Whitsundays via the Whitsunday Coast Airport. From there, you can take a raft or boat tour to get to Whitehaven.

The Bondi to Coogee Walk: Australia

Rarely does a day pass without a photo of Australia's famed Bondi beach surfacing in our Instagram feed, so it's not exactly under-the-radar. If you're going to visit Bondi, however, we suggest you take in this somewhat lesser known, two-hour cliff top coastal walk while you're there. You can stop to swim at any of the beaches along the path, splash in rock pools, and enjoy picturesque views (read: Snapchat destinations).

How To Get Here: Bondi Beach is about 30 minutes from Sydney, and you can take a train to get to and from the beach.

This pristine, white sand beach is on the island of Cayo Largo, which is located off of Cuba's southeastern coast. There are few resorts on this island, and no hotels lining Playa Sirena at all, so it feels pretty remote. There's also a (controversial) dolphin park located along this stretch of sand, but you won't be getting WiFi so don't expect to Snap your swim should you choose to go that route.

How To Get Here: The only way to get to Cayo Largo is by plane—you can fly from Havana, but it's a bit tough to organize until you actually get to Cuba. Ask your hotel about day trips to the island, which should cost around $150 per person for the flight, transportation to and from the airports, and lunch.

Any Beach On Formentera Island: Spain

The island of Formentera is known as Ibiza's sister island, but it shares little in common with the notorious party hotspot other than the fact that the rich and famous also flock to its shores. We suggest you stay at Es Ram, an eco-resort frequented by celebs like Kate Moss, and don't miss lunch at one of the island's biggest draws, Juan y Andrea. Meanwhile, insiders tell us that the strip that connects the main island to Espalmador, which you can only get to by boat or by walking from the main island, is the best piece of beach real estate on the island.

How to get here: The only way to get to Formentera is by ferry from Ibiza.

This gem, which is alternatively known as San Francisco, is located just 3 miles from the more popular surf town Sayulita (which we also recommend). In the 1970's, Mexico's president had a vacation home in San Pancho, and was inspired to invest in its infrastructure. The resultant village's golden sand beach is home to turtle hatchings and whale-watching, and you can end your beach day at one of San Pancho's excellent restaurants with other travelers and expats—most of whom are of a creative stripe. La Ola Rica is a favorite.

How To Get Here: You can fly into Puerta Vallarta, rent a car, and drive to San Pancho. It's a 40 to 60-minute journey, depending on traffic.

There are more than 6000 islands (!) in Japan, which makes choosing between their myriad, under-the-radar beaches incredibly difficult. The 4-mile stretch of white sand on Miyako Island known as Yonaha Maehama Beach is not as remote or isolated as some, but it's a local favorite, with shallow water that's perfect for swimming and snorkeling. Also on Miyako is Sunayama Beach (pictured here), which offers a great photo opp.

How To Get Here: You can fly to the Miyako-Jima airport directly from Tokyo; flight duration is around 3 hours.

If you've ever wanted to visit a beach with a bar named after its resident ocean-bathing pig, you should add Playa Avellanas to your bucket list ASAP. A favorite of in-the-know surfers—beginners and those more advanced—Avellanas is a remote stretch of sand famous only for that aforementioned bar (and its namesake pig), Lola's, so you won't be mingling with too many Americans as you sip cocktails with the cutest little porker ever.

How to get here: Playa Avellanas is 11 miles south of Tamarindo, which you can fly into directly.

Portugal is having a big moment right now with those in-the-know (but, shhhh), and based on recommendations, we'll be booking a ticket to Porto, stat. With that in mind, we narrowed down a vast selection of stunning beaches located in Portugal to one close to Porto, so you can visit both in one easy, fell swoop. Miramar is an isolated beach that boasts a secret—it's home to a charming chapel, the Capela do Senhor da Pedra (obscure wedding venue, anyone?).

How to get here: Miramar is located just fifteen minutes south of Porto.

If white sand beaches have ceased to impress you, fret not—Pfeiffer Beach actually boasts sand that has turned purple due to manganese garnet that erodes from the cliffs above the beach. Though swimming isn't necessarily recommended due to rocks and strong currents, this heavenly spot is perfect for those looking for a low key haven and, perhaps, a photoshoot. How dreamy is that au naturel arch?

How to get here: Pfeiffer Beach is down Sycamore Canyon Road in the Big Sur area, at mile marker Mon 45.64. It is not a state park, but it is on Los Padres National Forest land.