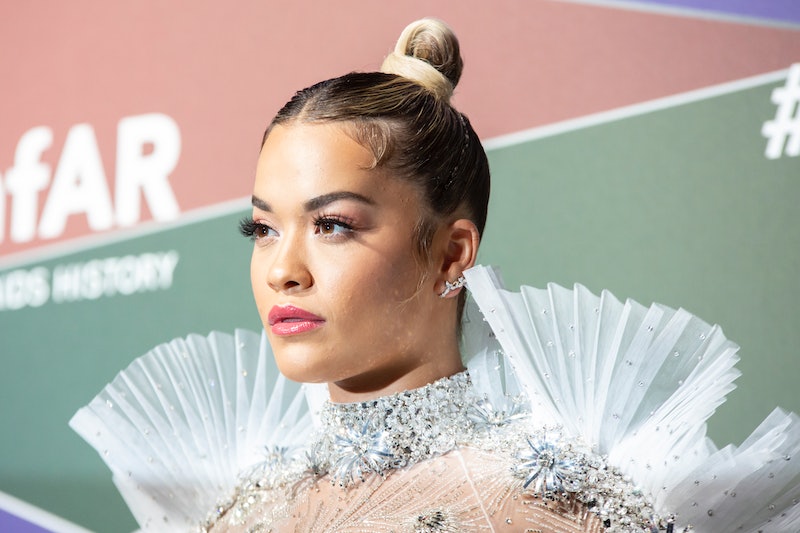 With mismatched shapes, drawn-on Twiggy lashes, and equally dramatic lidwork being the new pandemic-era norm, the intended purpose of eyeliner — you know, to line your eyes — seems almost antiquated at this point. You've watched hours of vloggers go to town with seriously intricate configurations and comically arbitrary flecks, but none measure up to the mastery of the floating crease-adorned double cat-eye that just transpired on Rita Ora's Instagram.

Facial coverings have turned 2020 into the year of experimental eye makeup and the unassuming eyeliner pencil has been its breakout star. Here we are nearing the middle of September and the looks keep coming, this time in the form of a possibly unprecedented double cat-eye/floating crease twofer.

Ora's latest selfie series features a thick, elongated wing extending from the corner of her eye, then another, slightly thinner one coming from below the waterline, then a third swipe emerging from the inner corners and following her crease, making for an ingenious composite of several major trends.

Firstly, there's the cat-eye, an old classic made new again with the addition of a twin wing; then there's the floating arch, made outrageously popular by Lucy Boynton (and others) in 2019.

The singer's version is flatter than the traditional wispy wing, and whereas many double cat-eyes stem from the same source, hers leaves a sliver of negative space in between. Before now, failing to get right against those bottom lashes would have almost definitely indicated a blunder — does this mean negative-space liner is no longer just a top eyelid thing?

If anyone can spark an eyeliner trend, it's Ora. In December, shortly before artistic liner became a lockdown pastime, her graphic, glittery blue swirls were the beauty highlight of the 2019 British Fashion Awards (possibly sparking subsequent experimentation). Now, with this latest creation, double cat-eyes-plus-floating creases are destined to become the new motif.