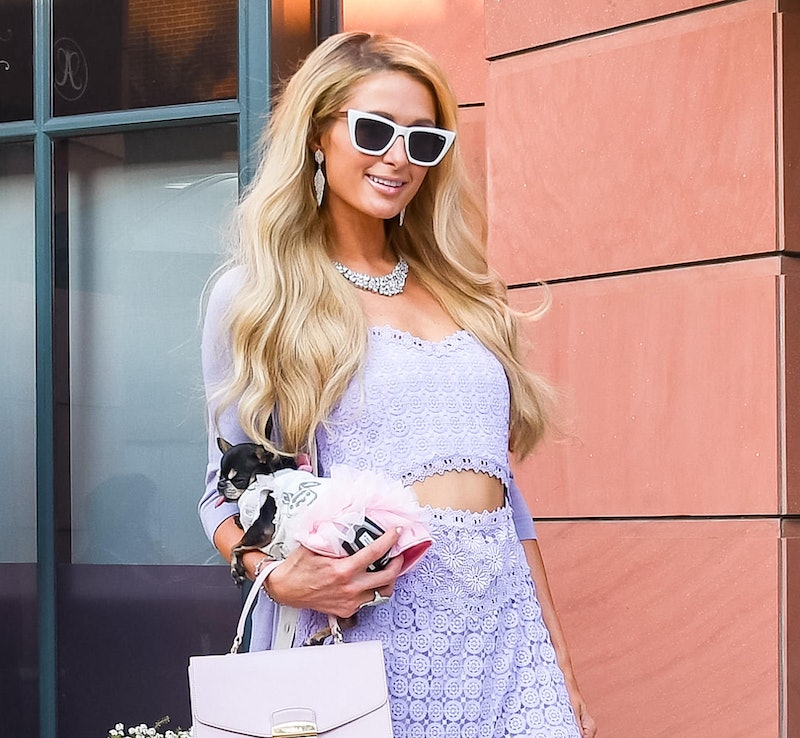 Paris Hilton's style is inarguably iconic: rhinestone-encrusted dresses, velour tracksuits, and chihuahuas as arm candy. The socialite led the charge in setting countless '00s trends and her impact is still visible today, as early aughts fashion is back with a vengeance. As part of the star's fashion legacy, Hilton's engagement rings over the years — they now total four — have also earned a rightful place in her style discourse, and they deserve a resounding "that's hot" remark. Hilton has been engaged a few times over the years and with her latest proposal from entrepreneur Carter Reum, it's time to take a look back at her most memorable rings.

The couple's engagement news was officially shared on social media on Feb. 17 to coincide with Hilton's 40th birthday. In a Vogue spread, the socialite allowed fans to get a closeup view of her three-stone emerald cut ring, which was custom made by jeweler Jean Dousset. The grandiose design was quintessentially Hilton — glamorous and larger than life while playing to the trends. In fact, if you look back on her previous three engagement rings, you'll see Hilton was always ahead of the engagement ring trends. Below, find all of the incredible precious engagement baubles she has received over the past 20 years. Then, shop similar ring designs to Hilton's, or send this post to your partner for a not-so-subtle gesture of what you want.

Starting with her most recent ring, Hilton received an emerald cut sparkler from Reum. The custom made Dousset creation — Dousset is the great-great-grandson of Louis-François Cartier, who founded the iconic Cartier brand in 1847 — is one of a kind and, according to Brides, the ring is estimated to be around $1 million. To give fans a more intricate view of the ring's design, Hilton even released an artistic drawing of it on YouTube.

In 2018, actor Chris Zylka proposed to Hilton after two years of dating with a breathtaking pear-shape ring estimated to have been worth $2 million. Celebrity jeweler Michael Greene designed the 22-carat stunner, which featured a giant center stone surrounded by a halo of diamonds all set on a double diamond pavé band. According to People, the pear-shape design was inspired by a ring belonging to Hilton's mom. "Paris at one point in time told Chris she really loved her mother's pear-shaped diamond, and when Chris came to me that was his request," said Greene in the interview. The style of this ring was also popular in 2018 and interest in pear-shape stones was thanks in part to celebrities like Hilton rocking it. For those who followed her ring story, you'll recall in that same year Hilton momentarily lost the $2 million bauble while partying in Miami — luckily, it was found in an ice bucket hours later. Hilton still has the ring Zylka gave her.

In 2005, after less than a year of dating, Greek shipping heir Paris Latsis proposed to Hilton after she got back from a three-week press tour for House of Wax. Latsis presented her with 15 different engagement rings and Hilton reportedly selected a 24-carat canary diamond ring worth about $5 million. Though the couple's engagement ended less than six months after the initial proposal, her rock still tops the list for one of the most stunning pieces of jewelry that ever graced Hilton's fingers. The yellow coloring of her impressive ring foreshadowed the current rise in popularity of colored stones.

Hilton's first proposal came when she was just 21 years old — ah, young love. In 2002, model Jason Shaw presented a pear-shape diamond set in a delicate gold band to Hilton. The two were engaged for a year before it ended, though not much is known about the relationship around this time — possibly because social media was still in its infancy of deep-diving into a celebrity's personal life. However, in 2010, during an appearance on The Ellen DeGeneres Show, Hilton revealed that she was still in contact with Shaw and had gone on a date with him since they broke up. Though the couple did not last, Hilton's penchant for pear-shape rings certainly did as evidenced by the one she kept from Zylka.