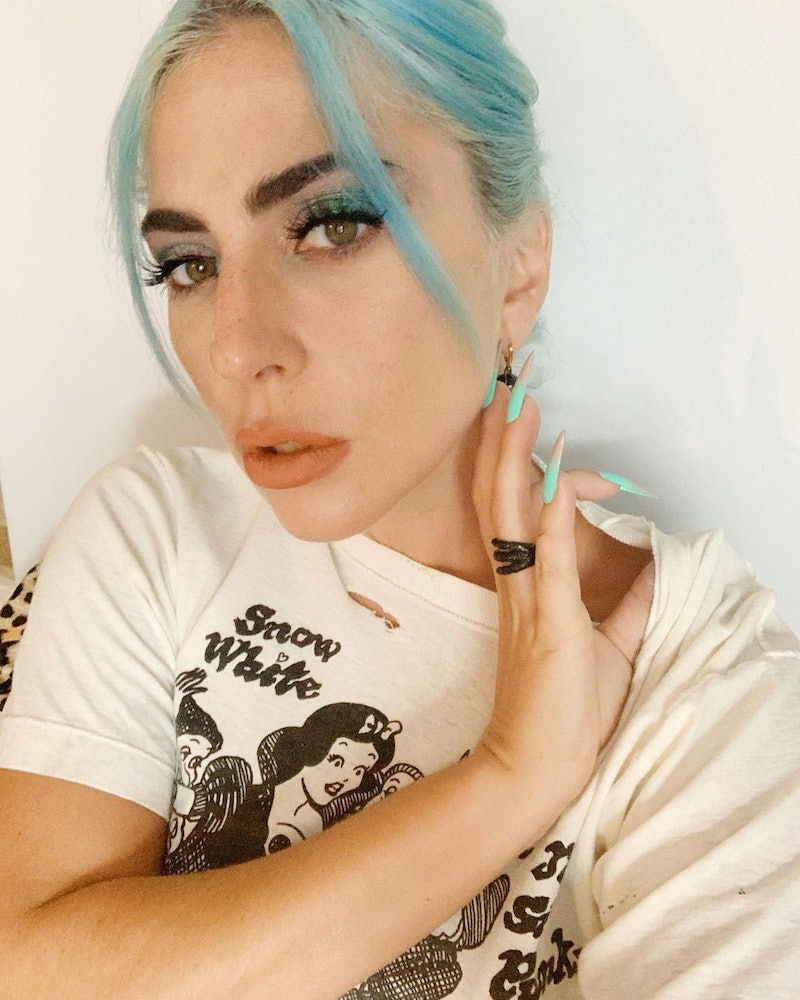 Alert the monsters: dark-haired Gaga is officially back. After recent street style photos of Lady Gaga with new brunette hair for her House of Gucci role generated quite the buzz here in the states, the musician, entrepreneur, and actor has finally shared a snapshot of the fresh hair color on her own Instagram. Posed alongside Gucci co-star Adam Driver, Gaga looks every bit the role of Italian socialite Patrizia Reggiani, wearing an all black and gold ensemble, elaborate jewelry, and a white fur cap. Fortunately, it doesn’t completely cover her hair, or more importantly, the bangs, which are clearly styled similar to Reggiani’s own look from the time — but play right into the current curtain bang trend, as well.

In the post, only a section of Gaga’s hair is left out, but it’s clear that it’s either been dyed a rich chocolate brown color or some serious movie magic has gone into a wig fitting. It’s just as exciting for fans to see her makeup, too — much more low-key than typical high-art Gaga, with a softly smoky lid, simple natural brows, and a pink-nude lip.

And just in case you thought this might be Gaga vacationing in the mountains with a fellow celeb, the star made it clear that this is one of the first looks at the upcoming film’s impeccable costuming, captioning the post with, “Signore e Signora Gucci #HouseOfGucci.” Predictably, fans have turned out to support it: The March 9 post received more than one million likes on Instagram within the first hour.

Gaga’s friends are getting into the spirit of the film, too. Frederic Aspiras, a hairstylist and wig art designer who’s worked closely with Gaga, commented “Ciao!” Meanwhile, designer Nicola Formichetti — another frequent and longtime collaborator — simply commented “🙌.” What everyone is thinking, really.

Naturally, posting an internet-breaking pic isn’t all Lady Gaga is up to. Her beauty brand Haus Laboratories also just launched an eyebrow pencil on March 9, which you can shop via the brand’s website or on Amazon. Just another day in the life of the woman who can give the world Chromatica, makeup products, and a Gucci family biopic.

See another look of Lady Gaga’s new brunette hair, below.