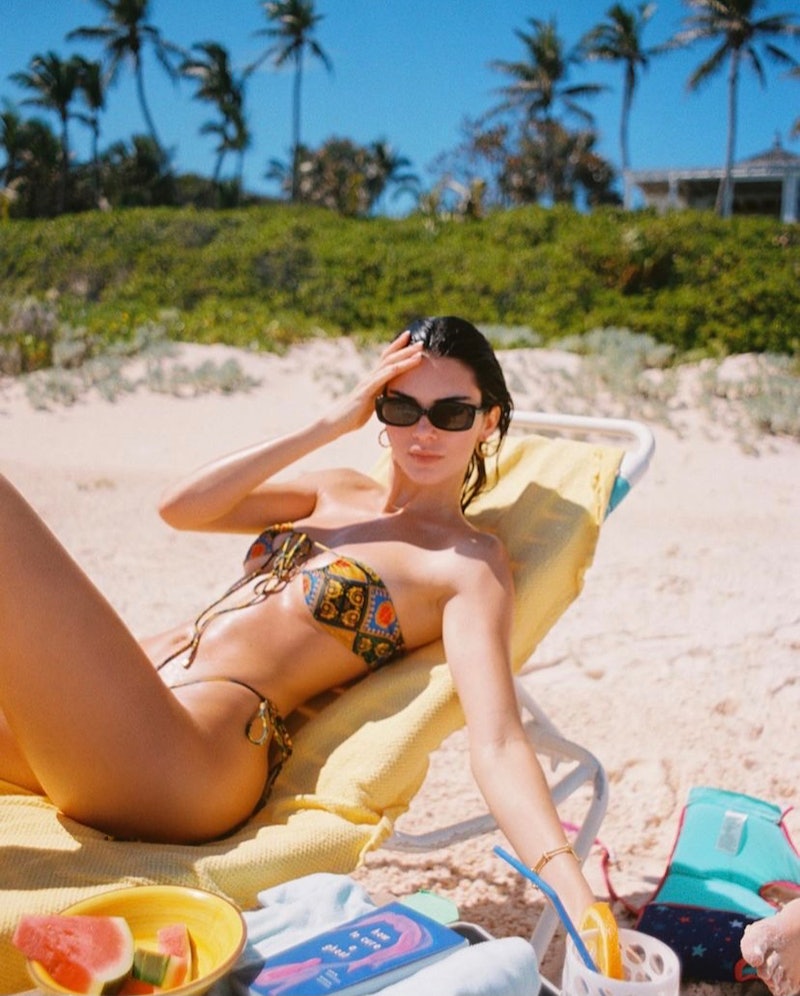 Kendall Jenner’s taking every opportunity to rock her many swimsuits before summer ends. She loves the whimsical patterned styles from Heavy Manners and recently, showed off her preference for solid-colored designs. In an Instagram post, Jenner shared photos of herself in a sunflower yellow-colored bikini. Though the swimsuit seemed like your standard two-piece string set, fans were quick to point out, via Instagram comments, a deeper meaning to the look. Fans thought Jenner’s yellow bikini, which was coupled with a caption that read “loves the sun,” was a tribute to her boyfriend Devin Booker. The athlete plays for the Phoenix Suns — and his team beat the Milwaukee Bucks in game one during the NBA finals on July 6.

The model is a huge fan of the sport and always sits courtside in stylish attire to cheer on Booker at his games. The fact his team won and she happened to wear a bikini called “sunshine yellow” may all be connected as internet sleuths pointed out. Booker even took to Jenner’s Insta post to comment with three flame emojis, which also happens to correlate with Phoenix Suns’ logo of a basketball on fire. You may think fans are attaching too much cheeky symbolism to Jenner’s latest bikini look, but ... all the signs are there. For those keen to shop the model’s exact swimwear pieces, you can buy her set from the label Away That Day.

Just like her eldest sister Kourtney Kardashian, who wore a matching bucket hat with her patchwork bikini this week, Jenner also sported a yellow-hued hat with her swimsuit. The two sisters have always been obsessed with swimwear and, at times, they even wear the same bikini. (A true characteristic of sisters.) To complete her beach-y ensemble, Jenner wore a minimalist gold necklace from Missoma and sunglasses from Lexxola.

If you like Jenner’s recent switch from paunchy prints to a single color bikini, you’ll want to get her exact style asap. The Rio style, which is available for pre-orders right now, even comes in several other hues (if sunshine yellow doesn’t speak to your soul) such as chocolate, sapphire blue, and red. Additionally, TZR found other similar yellow bikinis for you to shop, which are nearly indistinguishable from Jenner’s Away That Day set.