Food is her love language. 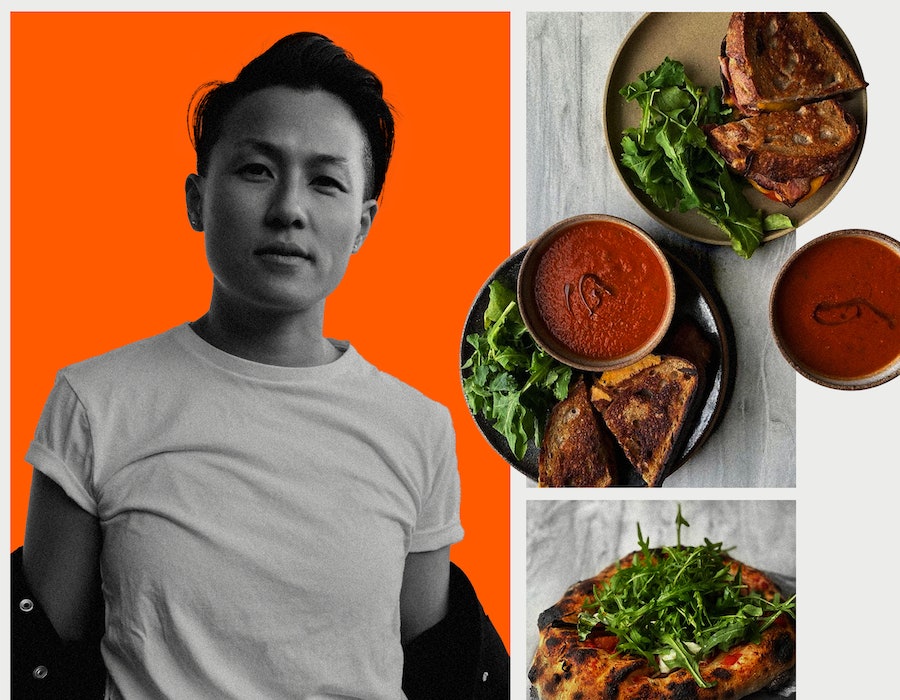 Fans of Bravo’s Top Chef don’t need an introduction to who Chef Melissa King is. Not only was she a notable contestant on the Emmy-award-winning show’s 12th season, but she took home the top prize (as well as the title of Fan Favorite) during All Stars: Los Angeles. These television appearances gave her a platform, but the queer, Asian-American culinary star’s style (both on her perfectly composed plates and her cool androgynous fashions outside the kitchen), talent, charm, and activism are what earned her a spot in the first place, and that’s also what will keep her propelling forward in the industry — and beyond. As for where she got the confidence it takes to achieve this success? King credits the culinary community and what she’s learned being a part of it.

The California native, who shares Cantonese and Shanghainese heritage, grew up with the understanding that food (and its preparation) can be a way of creating family bonds. “I’ve been cooking since I was five,” she tells TZR. “My mom was a working mom, and when she came home from work she switched to mom mode and had to put food on the table for the family. I’d spend time with her in the kitchen, washing rice and vegetables, standing on a stool stir frying in a big wok.”

Cooking naturally moved from a domestic necessity to a hobby for King, who watched cooking shows with Julia Child and Martin Yan in lieu of cartoons. She would go on to receive a Bachelor’s Degree in Cognitive Science from UC Irvine, but later studied at the Culinary Institute of America and has been cooking professionally for 15 years, which includes time in heralded Bay Area eateries like Luce and The Ritz Carlton Dining Room and even preparing food for Oprah.

King’s path to success was paved with hard work, and while she found a unique sense of community working in kitchens, there were times in her culinary career when her identity was challenged. “It’s often viewed as the place for misfits: You could have tattoos, pink hair, nose rings and no one would care,” she explains. “I felt safe to come out to my coworkers and be free in my gender expressions, although everyone’s in a uniform and often made to look the same while at work. I used to have long hair and was much more feminine in my outward expression and I had my moments of being cat-called by men during work, but the second they found out I was a lesbian or the second I cut my hair short, suddenly I became ‘one of the boys,’ so I did experience an unfair double standard.”

As King’s culinary skills sharpened, so did her confidence, which led her to her first stint on Top Chef Boston in 2014. It was this experience that finally gave the chef the boost she needed to believe her potential was limitless. “The idea of being on national television and putting my work out into the world made me feel vulnerable and terrified,” she tells TZR. “But leaning into that fear and deciding to go for it only validated my strength. When you push beyond your boundaries, you’ll be surprised at the person you discover on the other side of your journey.” And this feeling magnified during her second season on the show, when she took home the title.

For receiving the additional honor of “Fan Favorite” during the season, King was awarded $10,000 — all of which she donated to causes near to her heart: Asian Americans For Equality, Asian Youth Center, The Trevor Project, and National Black Justice Coalition. And the chef tells TZR that activism is a cornerstone of the platform she’s created. “I’m most passionate about supporting the AAPI and LGBTQ communities,” she explains. “I’ve designed a shirt with a Korean American designer and friend, Sunjin Kim that says ‘I AM A HUMAN’ and 100% proceeds go towards supporting Stop AAPI Hate. I’m also a big fan of supporting The Trevor Project and their initiatives towards providing suicide prevention support for our LGBTQ youth.”

King’s openness and advocacy has connected with people worldwide who have gotten familiar with her journey, so now she’s passing the sense of community the culinary arts gave her onto others. “I have received so many positive messages from strangers saying how much my story resonated with them, how they are proud to see an Asian American Top Chef winner, or how they had the strength to come out to their family and friends because they saw my story,” she says. “These incredible, real life stories are what keep me going.”

Asked what she would tell young people who seek a sense of belonging through cooking, King says, “I would tell them to not give up on themselves. The culinary industry, or any industry really, has room for you. I would tell them don’t be afraid to be loud and take risks.” And the chef continues to take such risks in her own life. Fans of Top Chef have been happy to see her back on their screens as a rotating judge for the current season in Portland, but King has also launched virtual cooking classes, partnered with influential brands like Whole Foods, appeared in a fashion campaign for Gap, and even created a line of currently sold-out small batch sauces, in addition to her activism.

But no matter the ways her career continues to grow and expand, cooking will always be close to her heart. “Food is my love language,” she says. “It always has been. It’s been the outlet I go to most when I’m feeling happy or sad or seeking a challenge.” In fact, there’s one particular nostalgic Chinese dishes that’s a constant source of joy and a representation of how food creates community. “I’ve been making and eating dumplings since the womb,” King shares. “There's something comforting about knowing dumplings were made by hand with lots of love.”