This is how you can get involved right now. 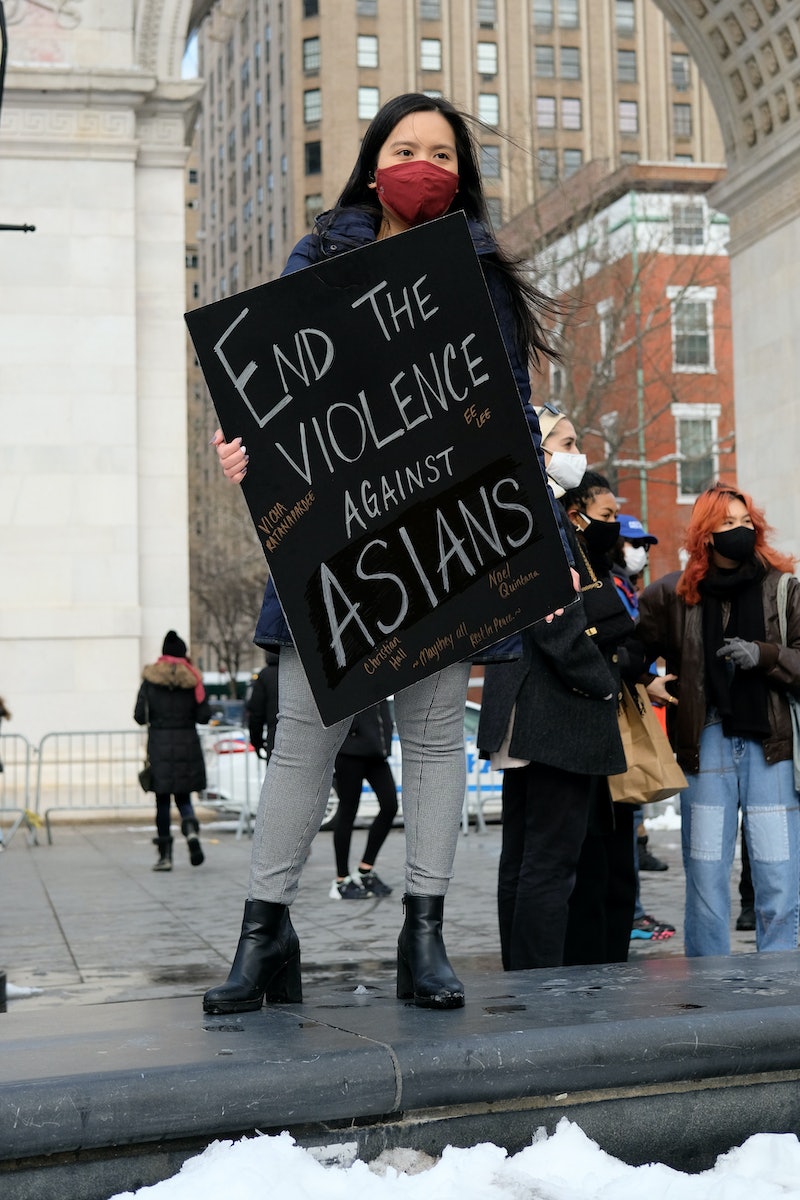 On Tuesday evening of Mar. 16, eight people — six of whom were Asian women — were shot and killed by a 21-year old white gunman at three spas in Atlanta, Georgia. This is the latest hate crime following many others over the past year towards Americans of Asian descent. According to the Los Angeles Times, “In a survey of police departments in 16 major U.S. cities, the Center for the Study of Hate and Extremism, a research office at Cal State San Bernardino, found a total of 122 anti-Asian hate crimes last year — a 149% increase from the 49 in 2019.” If you want to show support to the AAPI community, there are places you can donate to, as well as other ways to take action and protect the community.

Many brutal encounters against Asian Americans have risen during the pandemic. In fact, CNN reports that between March and December of 2020, 2,808 complaints were reported to Stop AAPI Hate, an organization that launched back in March 2020. The article adds, “The organization, which tracks racist encounters against Asian Americans, reported 8.7 percent of the incidents involved physical assaults, and 71 percent included verbal harassment like the one NBA star Jeremy Lin experienced when he was called "coronavirus" on the court.

With the rise in hate crimes targeting the community, it's crucial to offer support, especially to women who are at an even higher risk of attack. A new study from Stop AAPI Hate of almost 3,800 hate incidents from March 2021 shows that women of Asian descent have reported 2.3 times more incidents of violence than AAPI men. There has been a long history of hypersexualization of Asian women, with such fetishization and stereotyping putting these women at even greater risk of violence and sexual harassment. This hypersexualization is rooted in Westernized and colonial perceptions of Asia.

Right now, there are many ways you can stand in solidarity and help the AAPI community which can range from donating to those in need to simply acting as an ally and educating yourself on the history of violence against Asians, and more specifically Asian women. Ahead, find places you can donate to as well as other ways to get involved.

Support The AAPI Community: Donate To The Red Canary Song

Butterfly Asian and Migrant Sex Workers Support Network was created by sex workers, social workers, as well as legal and health professionals. The Toronto-based organization works to provide support and advocate for the rights of Asian and migrant sex workers by providing outreach to sex workers as well as putting together legal, health, and safety workshops. According to The Guardian, in Toronto, there’s a law that forbids owners and workers at massage parlors from locking doors to their individual rooms and cubicles. Elene Lam, the executive director of Butterfly, told the news outlet, “this has left some workers vulnerable to robbery, harassment, and assault, as well as hesitant to call the police for fear of being criminalized themselves.” If you’re able to, consider donating to the organization here.

Based in Georgia, the Asian American Advocacy Fund is a grassroots social welfare organization that advocates for the civil and human rights of Asian Americans, Pacific Islanders, and Native Hawaiians. Help its mission by donating what you can to the organization.

According to its website, Asian Americans Advancing Justice-Atlanta is the “first and only nonprofit legal advocacy organization dedicated to protecting the civil rights of Asian Americans, Native Hawaiians, and Pacific Islanders (AANHPI) in Georgia and the Southeast.” If you have the means, consider donating to the Atlanta-based organization.

Currently, the National Asian Pacific American Women's Forum, founded in 1996, is the only organization centered around creating power with AAPI women and girls to help with making important life decisions. “Using a reproductive justice framework, we elevate AAPI women and girls to impact policy and drive systemic change in the United States,” its website adds. Support the group by donating here.

If you encounter a hate crime against the AAPI community, pick up your phone and report it. One way to do this is by calling STOP AAPI HATE, and donate to the organization if you can, too. Additionally, you can, and should, call the police when you witness a hate crime, as well as file a report to the FBI.

Support The AAPI Community: Educate Yourself

An important way you can get involved in supporting the AAPI community is by educating yourself on the history of racism against Asian Americans in the United States. This can be done by reading books like The Making of Asian America: A History and Yellow: Race in America Beyond Black and White, as well as watching documentaries such as the Asian Americans PBS docuseries.

Support The AAPI Community: Speak Out When You Hear Anti-Asian COVID-19 Commentary

If you hear someone making anti-Asian racist jokes or commentary about the coronavirus pandemic it’s crucial to speak out. If you don’t feel comfortable doing that, another way to approach the situation according to the Asian Pacific American Labor Alliance is by saying something like “I don’t get it. Can you explain why that is funny?” The alliance also suggests commenting: “That’s not funny and that is not actually how the virus works.”