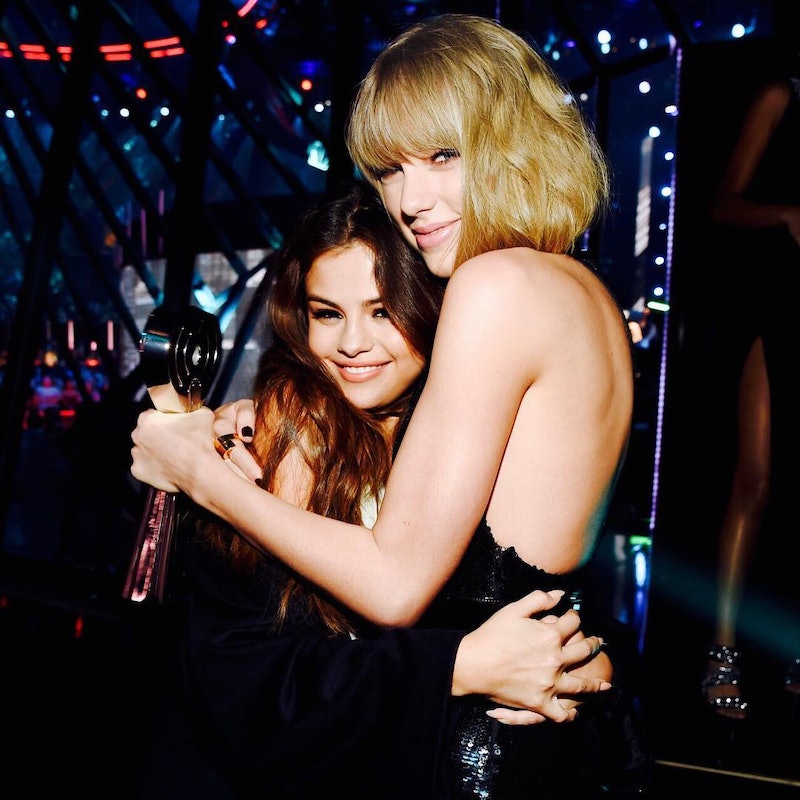 Today is National Bestie Day, which is just a totally ridiculous and useless holiday unless its celebration leads you to acknowledge how incredibly dependent you are on your BFFs, how lost you would be without them and how many times you would have made poor decisions if they hadn’t intervened to convince you otherwise. In honor of these women, whom we couldn’t live without, we’ve compiled a list of our favorite celebrity co-dependents, whose togetherness makes us smile every time we see their snaps.

"I mean, I've known her for 10 years. She's been one of my best friends through thick and thin—walked by my side," Selena's said of Taylor.

"When people are really harsh? I'm going to call Kendall, because Kendall's the one who will always be like, 'You don't need that, just let it go,'" Gigi has said. "And I know that if that's working for her then it can work for me."

These two are so close that even their babies are besties.

Nicole has claimed responsibility for setting up Cameron with her brother-in-law Benji Madden. "I am a devoted sister-in-law,” she once told Andy Cohen on Watch What Happens Live.

@carolinevreeland: "HAPPY BEST FRIENDS DAY to my partner in crime I love you so much!! @peaceloveshea"

Fun fact: Tina gave Amy her first beauty lesson. "Actually, we met in class at the ImprovOlympic Theater," Amy reminded Tina when they were interviewed by Marie Claire. Tina added: "I was 22 or 23, and I had only recently learned that you can pluck your eyebrows or have a lady put hot wax on them and remove portions of them and shape them. So this was a big thing that happened to me, and I passed that information on to you."

"A woman will always be my best friend," Jemima has said. "I'll never have a best friend who is a man. It just doesn't work that way. So many times young girls will be like, 'I'm a guy's girl.' And I'm like, 'No, you're not. There's no way a man can understand you like a woman, and you're a guy's girl because you're threatened by other women.' I was like that. I was only men. But that's because I felt special around men, and with a woman I can really be put in my place, and I'm on the same level as them. That's the way it's changed, is that I love women now, and I didn't before. Because I was scared of them, because they understood me."

You know your friend loves you (or, loves to embarrass you) when she's willing to pose nude for you on her Instagram account, which is exactly what Chelsea did in honor of Reese's birthday this year.