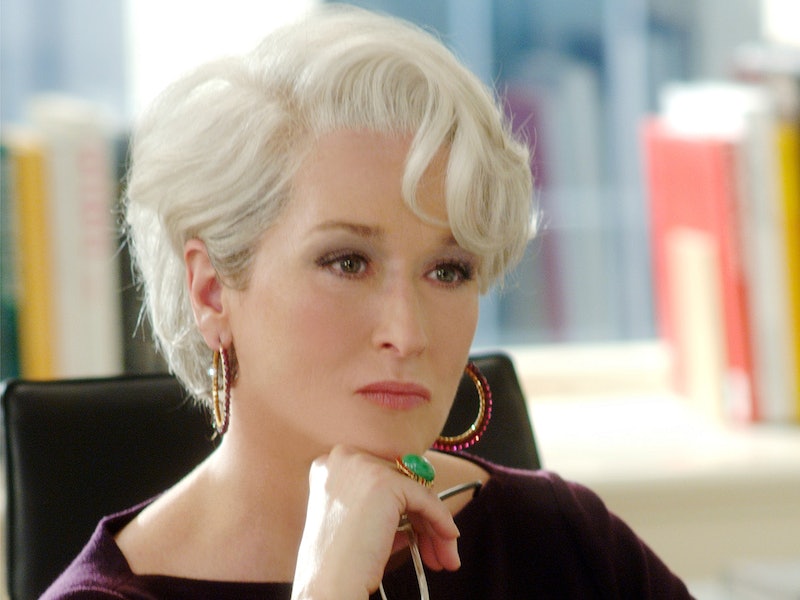 Meryl Streep was honored Sunday night at the 2017 Golden Globes with the Cecil B. DeMille Award. The annual statuette is given for “outstanding contributions in the world of entertainment,” which is an honor there is no question the brilliant actress has earned. In the span of her career, Meryl’s earned thirty Golden Globe nominations and, perhaps more importantly, she’s created innumerable iconic characters to which we’ve turned for inspiration (and quotes) on many an occasion. In her speech accepting the Cecil, Meryl put freedom of the press at center stage, took Donald Trump to task and was inarguably the highlight of the night. (So much so that the hashtag #MerylForPresident popped up on social directly after her speech.) “Take your broken heart and make it into art,” she said, quoting the late Carrie Fisher, and it’s that which she’s done, and helped us do, time and time again. Here, the many Meryls we channel in our daily lives, and which will continue to inspire us for years to come.

Life at the top can be difficult, but Miranda Priestly taught us what it takes to be a boss from an early age. Whenever we start to feel bad for asserting our opinions, we just think of this iconic line, delivered flawlessly by Ms. Streep. "Florals? For Spring? Groundbreaking."

Whenever we catch ourselves fantasizing about food and feel shame, as we've been societally conditioned to do, we think of Streep as the iconic Julia Child and any negative feelings melt away like heated butter. "What do you like to do?" her husband asks. "Eat," she replies. Amen, sister. We also like to channel Streep's Julia with respect to our romantic relationships, but sadly our men do not quite match up to the unbelievable perfection that is Paul Child.

Whenever we make a mistake with one of our exes, we think of Meryl in this movie. The same goes for when two men are vying for our attention, though that scenario has actually never happened for us. (Sadface emoji.)

This film was way ahead of it's time, and if you're too young to have seen it, we suggest you head to iTunes or Amazon stat. Hopefully we'll never take things as far in our search for eternal youth as does Meryl in this movie, but with the patriarchy—and its associated beauty ideals—firmly in place, you never know.

We can only hope our routine marriages will one day be interrupted by a hot and steamy four-day affair, the memory of which will then sustain us for the rest of our lives. Kidding. Kinda.