She loves the suits. 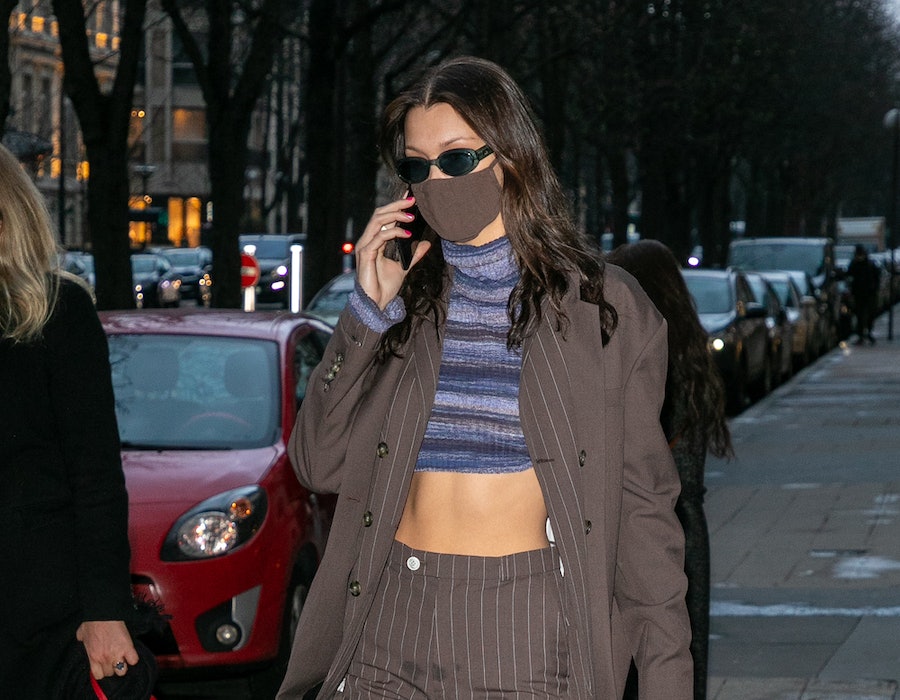 Bella Hadid always sets the street style trends. She debuts consistently groovy outfits that include throwback ‘80s and ‘90s-inspired pieces like candy crush-colored jewelry and lately, she’s reviving Von Dutch jeans. To keep up with her trendsetter status, there’s one Russian brand Hadid’s loving right now — she’s the first United States celebrity to sport the emerging label too — and that’s Ushatáva. Hadid loves its oversize suits. Ushatáva has yet to be represented by any major retailers in the U.S. or Europe, so founder/designer duo Alisa Ushakova and Nino Shamatava were very surprised and flattered to find out that Hadid had given the brand a major shoutout over the past couple of months.

“I’m sure it was initially done through [a] stylist” they tell TZR. “But given the fact that Bella has already worn our brand three times, it is safe to say that we are becoming one of her favorites.”

Hadid was first spotted wearing the baggy pinstripe suit jacket-and-pants set from Ushatáva earlier this year on Feb. 8, 2021 while stepping out to run a few errands in New York City’s SoHo neighborhood. She paired the oversized matching ensemble with a Chrome Hearts beanie, lug-sole Chelsea boots from Ganni, some vintage oval frames, and a seamless face mask from SKIMS.

She then proceeded to wear the brand’s suit jackets (no matching pants this time) two more times: once while jetting off from Milan on March 1, 2021 and another time when stepping out from Hotel de Crillon in Paris on March 2, 2021. For the full airport look, she paired the brand’s O-shape unisex shirt with some vintage nylon pants and a trusty Chanel tote. The next day, having made it to Paris safe and sound, she wore the ultra-oversized gray jacket paired with a crop top, some billowy pants, and the mocha-colored sneakers from the Air Jordan x Travis Scott collab for some city-appropriate attire. Hadid accessorized two of the three Ushatáva outfits with her favorite maximalist jewelry brand Le Manso, giving the menswear-inspired suiting pieces a more playful touch.

Although Ushatáva, which first launched in 2015, is well-known in Russia for its inventive designs and visionary approach to womenswear, in recent months the self-proclaimed elevated leisure label is making strides in the Western fashion market. Ushatáva honed in on its online presence earlier this year by making its website and online store fully bilingual — languages available are Russian and English — thus solidifying its cosmopolitan reach. Given the attention they’re now getting from consumers in Europe and the United States, Ushakova and Shamatava wanted to make sure people from all around the world can seamlessly access, and order, their designs.

The label releases its timeless, unisex pieces in small capsule collections that include natural materials such as cotton and wool. The wearable, yet unexpected silhouettes — think an anti-blazer dress or a suit jacket with an extra-exaggerated single vent — make the garments suitable for both work and play (hence the elevated leisure category). Since its inception, the brand has stayed unmistakably minimal in its approach to color and design, experimenting with architectural cuts that make the otherwise classic designs look fresh and inventive.

When speaking about their vision for the future of the label, Shamatava expresses that their ultimate goals are to continue to experiment with designs, push their own boundaries, and make sure Ushatàva becomes a better version of itself as a brand. “For instance, we’ve been working in such a way for the past five to six years, and now we believe that it’s time for us to explore new colors and silhouettes,” Shamatava says. “We just want to keep improving and reaching more diverse markets and people who we think might be interested in our brand.”

Aside from style, the growing label’s everyday pieces are affordable too. Most items fall under the $150 mark, give or take a few pricier items like Ushatáva’s oversized trench vest ($299). “It is part of our philosophy. What we want to do is make the ordinary, everyday people feel special without [them] having to spend thousands of dollars on clothing,” Ushakova explains. “You can just feel special because every person is special.” Ushakova and Shamatava share that they are currently designing new silhouettes for their upcoming fashion drops, so expect to see even more diverse, innovative, and unisex styles on the site — and on Hadid.

In the meantime, scroll ahead to shop some of Ushatáva’s latest online offerings, like the wide-leg pocket-embellished Bermuda shorts or a Basque belt bag — a novel alternative to your go-to fanny pack.