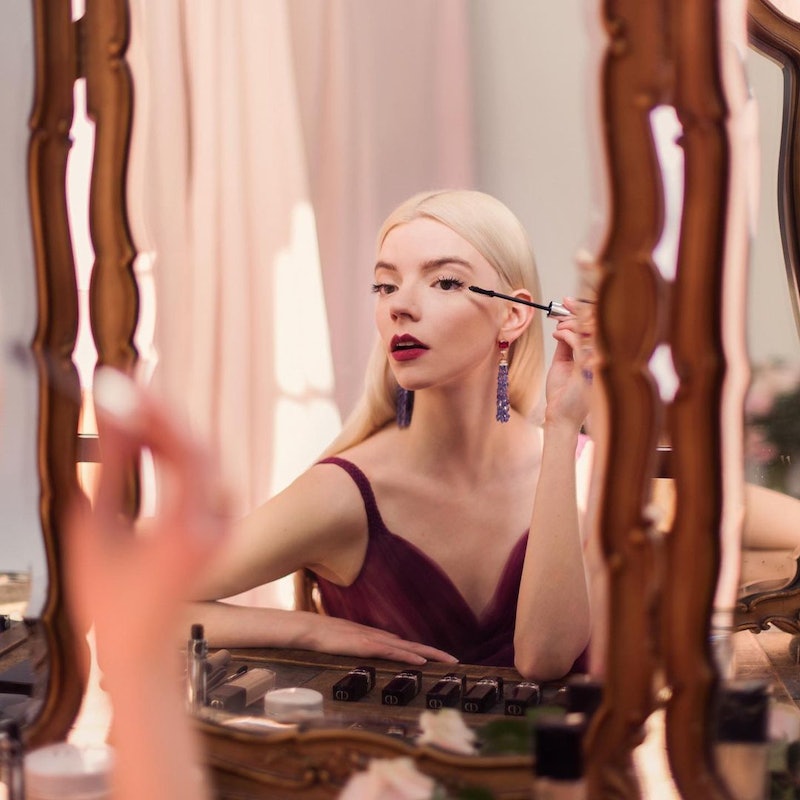 Typically, a stand-out award show beauty look requires an entourage of highly trained professionals, hired to prep the skin, style the hair, and create a near-perfect makeup masterpiece. However, Anya Taylor-Joy's 2021 Critics Choice Awards beauty look proved that it is possible to take matters into your own hands, and get stellar results. Yes, the actor (nominated for Best Actress in a Limited Series or Movie Made for Television for her lead role in Netflix's The Queen's Gambit) chose to do her own makeup for the big night, guided by celebrity makeup artist Georgie Eisdell, who designed the look, using Dior products.

"We decided on a beautifully simple, chic look," says Eisdell to TZR. "I wanted to design a look that was easy for her to do herself. It was a more structured look to offset the gorgeous and whimsical Dior gown." The makeup pro explains that she walked Taylor-Joy through the process, step-by-step, via Zoom the day before the event. "I showed her by doing it on myself," says Eisdell. "She [Taylor-Joy] was the student and she absolutely nailed it." Indeed, the actor's makeup complemented the ethereal nature of her flowy plum gown. Her skin had a clean, matte finish with soft contouring, and her eyes were kept neutral and demure apart from her bold, lush lashes. Adding the perfect pop of color was Taylor-Joy's rich, berry lip (a trending shade at last week's Golden Globe Awards).

To start off the makeup look, Taylor-Joy prepped her complexion with Dior's Forever Skin Glow to even out the skin and Dior's Forever Skin Correct to brighten the under-eye area. "To contour and shape the face slightly we used the Dior Backstage Face & Body Powder on the cheek bone, forehead, and jaw line," says Eisdell. "For Anya's cheeks, we used the Dior Rouge Blush on the apples of the cheeks very lightly, using a large power brush to blend it back.

For the actor's defined brows, DIORSHOW Brow Styler was used to fill in any gaps and extend the brows a bit. "On the eye lids, we decided to do a light wash of color," says Eisdell, revealing that Dior's Couleurs Couture eyeshadow palette in Nude Dress was used. "We used the lower left shade and dusted it lightly on the lid, up into the crease. To finish off the eye, Anya applied two layers of the DIORSHOW Iconic Overcurl in black on the top lashes only."

Possibly the most dramatic part of Taylor-Joy's makeup was her plum-colored lip, which was courtesy of Dior's Contour liner in Euphoric and Rouge Dior lipstick in Opera "to get that beautiful deep pink," says Eisdell.

All in all, Taylor-Joy's DIY makeup was a true success. In fact, the MUA jokes: "I think I may have lost my job!" To achieve the actor's simple-yet-stunning look yourself, shop the exact products she used below.