They may be similar, but the two are incredibly different. 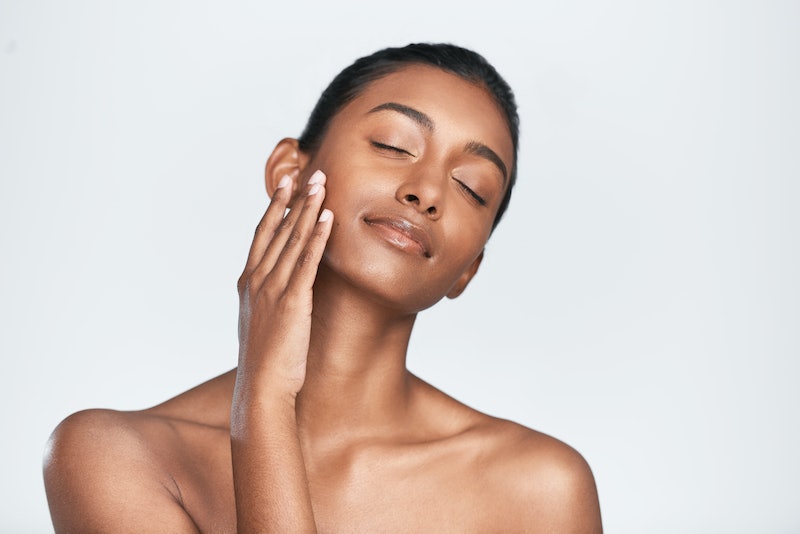 Hyaluronic acid, beloved beauty ingredient, comes in many, many, many shapes and forms. First, there’s the kind that naturally exists in your body. (Yup, you have your own hyaluronic acid supply pumping through your system and plumping your cells right this very second.) Then, there are synthesized hyaluronic acid gels, like Juvéderm and Restylane, used for injectable fillers. Finally, there are the two versions most commonly found in skin care products — hydrolyzed hyaluronic acid and sodium hyaluronate — that tend to cause confusion in the beauty community. So which one is actually better for your skin? Cosmetic chemists and dermatologists say it's... kind of a draw.

That conclusion is disappointingly vague, to be sure. But the reasoning behind it — how different forms are created, the pros and cons of each, which works best for certain skin types — is pretty fascinating. Before you can understand the intricacies, though, you have to start with the basics.

“Hyaluronic acid (HA) is a polysaccharide that can attract up to 1,000 times its weight in water,” Dr. Aanand Geria, a dermatologist with Geria Dermatology in New Jersey, tells TZR. “HA is naturally present in our joints and eyes because these structures must be constantly moist and lubricated in order to function properly.” It also plays a big part in skin health, keeping cells hydrated and plump. “As we age, the levels of HA in our body diminish, and it can show on our skin by making it drier and more prone to wrinkling,” Ron Robinson, a cosmetic chemist and the founder of BeautyStat Cosmetics, tells TZR. Which explains why the buzzy ingredient is on (and in) everyone’s lips.

Although hyaluronic acid does naturally occur in the human body, it’s not necessarily considered a “natural” ingredient in skin care, since HA needs to go through chemical processing in order to be effective in topical application. “HA is known to have a large molecular weight and therefore does not penetrate the skin,” Robinson says. One way to minimize the HA molecule is via hydrolyzing — AKA, breaking it down via a chemical reaction with water — which results in the hydrolyzed hyaluronic acid commonly seen in serums and moisturizers (La Roche Posay Hyalu B5 Hyaluronic Acid Serum, Moon Juice Plumping Jelly Serum). “[This type of] HA works on skin’s surface to attract and bind significant amounts of water to help hydrate the skin,” Robinson explains. It's especially useful in the winter months, when your skin is naturally drier on the surface, as long as you use an occlusive to lock it in. (More on that later.)

The more common way to turn pure hyaluronic acid into a useful topical is to “extract” its “sodium salt” to get sodium hyaluronate. “Sodium hyaluronate is a derivative of HA — specifically, it’s a salt form of HA,” Robinson clarifies. Sodium hyaluronate has a lower molecular weight than HA and hydrolyzed HA, so it’s more easily absorbed into pores. “Sodium hyaluronate has the ability to penetrate into deeper layers of the skin, and also attracts and binds water,” the cosmetic chemist says. “This effect can plump the skin, thus reducing the look of wrinkles and making skin younger-looking.”

To recap: hydrolyzed hyaluronic acid works at the surface-level to smooth and hydrate, and sodium hyaluronate does the same on a deeper level, which helps reduce signs of aging. “Both forms have advantages and can be used together, depending on the desired effects,” Robinson says. There are plenty of products that boast both for double the benefits, including Glossier Bubblewrap and Versed Skin Soak Rich Moisture Cream.

The risks of hydrolyzed HA and sodium hyaluronate are pretty minimal, but there’s evidence to suggest you can have too much of a good thing. “It needs moisture to work, so when applied to skin in dry conditions where humidity is low, it will pull moisture from wherever it can; that’s just the nature of the beast,” The Cut reported in 2019. “If there’s no humidity to be obtained from the air, it draws moisture from the deeper layers of skin and brings it to the surface of the epidermis, whence it evaporates, leaving skin drier than it was.” The solution here is twofold: Use only one HA-containing product at a time, and seal it in with a moisturizer or oil.

As with any ingredient, “irritant or allergic reactions are always possible,” Dr. Geria says. Some beauty enthusiasts find they have sensitivities to sodium hyaluronate, but their skin thrives on hydrolyzed HA (it’s a big topic of conversation in Reddit’s Skincare Addiction community). One study theorizes this is because the low molecular size of sodium hyaluronate can cause inflammation. If you notice any inflammatory symptoms — blemishes, redness, irritation — you may want to hold off on the sodium hyaluronate serums and moisturizers to see if that helps.

Ahead, discover 12 skin care products that feature hydrolyzed hyaluronic acid, sodium hyaluronate, or both — because really, there’s no wrong way to hydrate.

The long- and short-chain hyaluronic molecules in this high-performing serum help lock in moisture all day long.

This cleanser from Neutrogena is perfect for summer. The gel texture is lightweight, and the hyaluronic acid inside leaves skin hydrated even after you pat dry.

The launch of Kylie Skin Face Moisturizer brought the words "sodium hyaluronate" into the spotlight. It's the key ingredient in this mix, alongside shea butter.

The name says "Hyaluronic Acid," but the ingredient list says "sodium hyaluronate." A matter of semantics, perhaps, since either way, you can expect major moisture.

It's a cult-favorite for a reason: SkinCeuticals' version contains sodium hyaluronate *and* an ingredient called Proxylane, which boosts the skin's own levels of hyaluronic acid for a firmer, smoother appearance.

The Silk Therapeutics line was founded by a cosmetic chemist, so top-notch ingredients are to be expected — like easily-absorbed sodium hyaluronate and skin-smoothing activated silk.

With moisture-boosting sodium hyaluronate, moisture-sealing niacinamide, and exfoliating lactic acid, this serum is sure to give your skin the glow-up.

Glossier covered all the bases with Bubblewrap. Hyaluronic acid and sodium hyaluronate come together to plump and perfect on every level.

This under-$20 find from Target's latest clean beauty brand, Versed, delivers both hydrolyzed HA *and* its lower-molecular-weight counterpart.

"A synergy of three molecular weights of hyaluronic acid and three organic seaweeds work together to provide long-lasting hydration," OSEA says on its site. And you know what they say: Three is better than one.

This article was originally published on 7.12.2019