Commitment issues? This one’s for you. 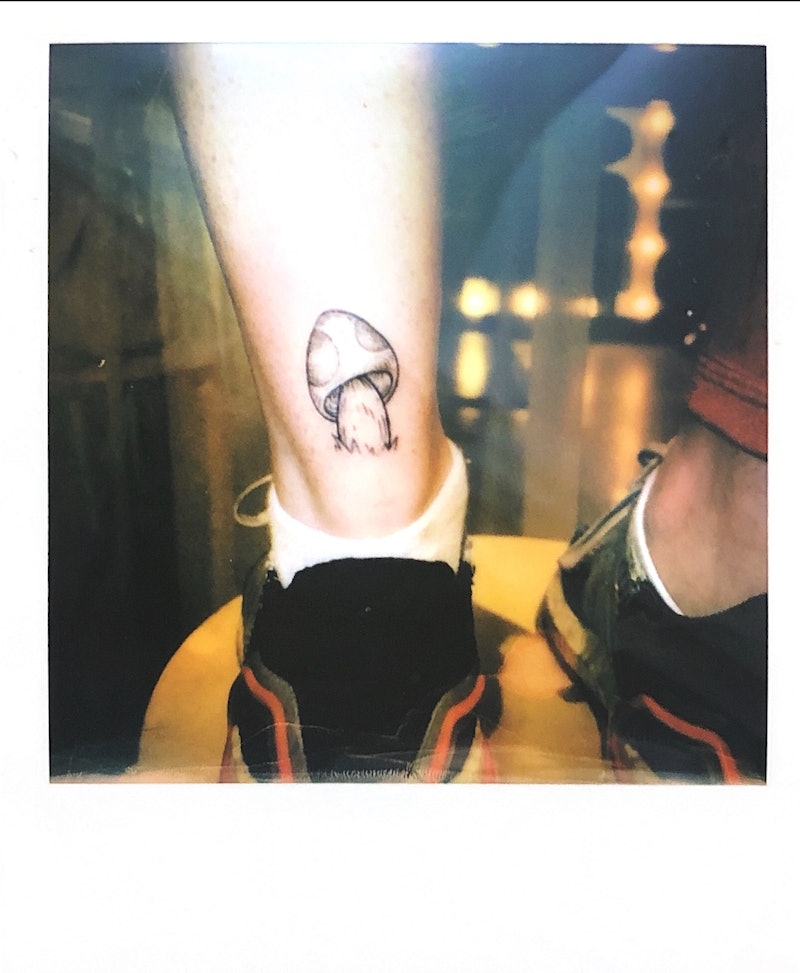 When I got my first tattoo at age 18 — a teeny tiny star behind my ear inspired by Rihanna, of course — I told myself it would be the only one I would ever get. Yet, seven years and nine tattoos later (sorry, Mom), I’ve become a tad obsessed. Every opportunity I’ve had to get a new one, be it a Friday the 13th deal or just a friend wanting someone else to get one together, I quickly jumped on it. And recently, when I saw a TikTok about Ephemeral Tattoo, the first-ever made-to-fade tattoos that only last a year, I was intrigued to see what the deal was. Yes, I’m up to tattoo number 10 as of last week.

I walked into Ephemeral Tattoo’s incredibly chic Williamsburg, Brooklyn studio, open as of March 25, where I was warmly greeted by the energetic staff. Immediately upon my arrival, they informed me about how made-to-fade tattoo works. I know what you might be thinking — how is it possible for a tattoo to only last a year? Because, well, I was thinking it, too.

First off, according to co-founder Joshua Sakhai, Ephemeral Tattoo’s ink took six(!) years to develop, “with research and testing comprising more than 50 formulations — by [co-founders] Dr. Vandan Shah and Dr. Brennal Pierre, who are also part of the founding team of Ephemeral,” he explains over email. To ensure the tattoos actually worked, they tested them on themselves with over 200 tattoos combined.

Safety was a big priority for the team when formulating the tattoo ink. “Our ink is made from materials that are FDA approved for use in cosmetics, medical devices, and drug products; and are also applied by real tattoo artists who have been in the industry for years,” Sakhai notes. Additionally, co-founders Dr. Pierre and Dr. Shah have PhDs in chemical engineering, helpful when creating a brand new ink that goes into people’s bodies. “We also have partnered with leading dermatologist Dr. Dhaval Bhanusali to initiate an IRB-approved clinical trial to scientifically validate the safety and efficacy of the ink,” Sakhai adds.

Now for the question you’ve all been wondering — what exactly does the ink entail? For starters, Sakhai says to fully understand how the new studio’s tattoo ink works, it’s helpful to know why permanent tattoos are permanent. “A permanent tattoo uses ink that goes into the dermis — the layer just below the outer skin— administered via needle by a trained tattoo artist,” he explains. “The thing that makes permanent tattoos permanent is your body’s inability to break down the dye. Traditional tattoo ink clumps together; too large to be removed, your body ‘walls off’ the area, and the ink stays.”

In contrast, Sakhai says Ephemeral Tattoo’s ink particles break down over time, and become small enough to be removed from the body. The rate at which this happens will vary from person to person. “Ephemeral tattoos are applied by real tattoo artists with real tattoo machinery,” he adds. “Like traditional tattoos, Ephemeral tattoos are applied through an intrusive process in which the ink is being applied into the dermis layer by breaking open the skin.” That means needles and a tattoo machine.

All tattoos, whether they are permanent or Ephermeral’s made-to-fade iterations, transfer ink through needles. “Once your Ephemeral Tattoo fades, you might see skin markings from this process,” Sakhai notes. Eventually, he says they will disappear naturally. “But the timing, and whether marks disappear entirely, depend on your specific skin physiology.”

After learning about the science behind the ink, it was time for me to experience it for myself. For my selection, I decided on an adorable mushroom right above my ankle (photo below). After nine tattoos, I wasn’t worried about the pain. But, I won’t sugarcoat it, the tattoo hurt a lot. In fact, significantly more than all the other ones on my body. This could, however, be the spot in particular. Beauty is pain, right? The process took around 20 minutes, which is standard for the size.

Once I was done getting inked, my artist told me what to expect next. As far as aftercare goes, the studio gives you a bottle of Cortisone to take home with you, not Aquaphor or another unscented moisturizer, which is typically recommended for regular tattoos. This is because Cortisone is intended to mitigate any itchiness and redness, which, again, they say is normal to experience during the healing process. Additionally, Green Goo (made with aloe vera, myrrh, and yarrow) is provided to customers, which happens to be a known leader in tattoo aftercare.

In general, Sakhai says the tattoos last around nine to 15 months. “How the tattoo looks over time is very much influenced by the healing process, so taking great care of it is critical,” he explains. In fact, the healing process also differs from a regular tattoo, which I’m currently noticing on my week-old mushroom. “On average the healing process takes four to six weeks, although you'll be able to enjoy your Ephemeral a few days after your visit,” the co-founder explains. “During this time there might be minor irritation or itching, which is all perfectly normal.”

The time in which the tattoo begins to fade also depends on the person’s environment, as well as their physiology. “The process depends on placement, design, unique skin make-up, sun exposure, and other factors,” Sakhai notes. “For some, fading may start to be noticeable around month five, and for others, it may not be noticeable until month eight.”

All in all, I’m happy with how my made-to-fade tattoo turned out, as well as the pleasant experience I had at the studio. As for how long it will take for mine to fade — that’s still TBD. But in terms of having an option for people who aren’t quite ready to commit to a tattoo for the rest of their life, Ephemeral Tattoo is definitely a game-changer.