You need to see them for yourself. 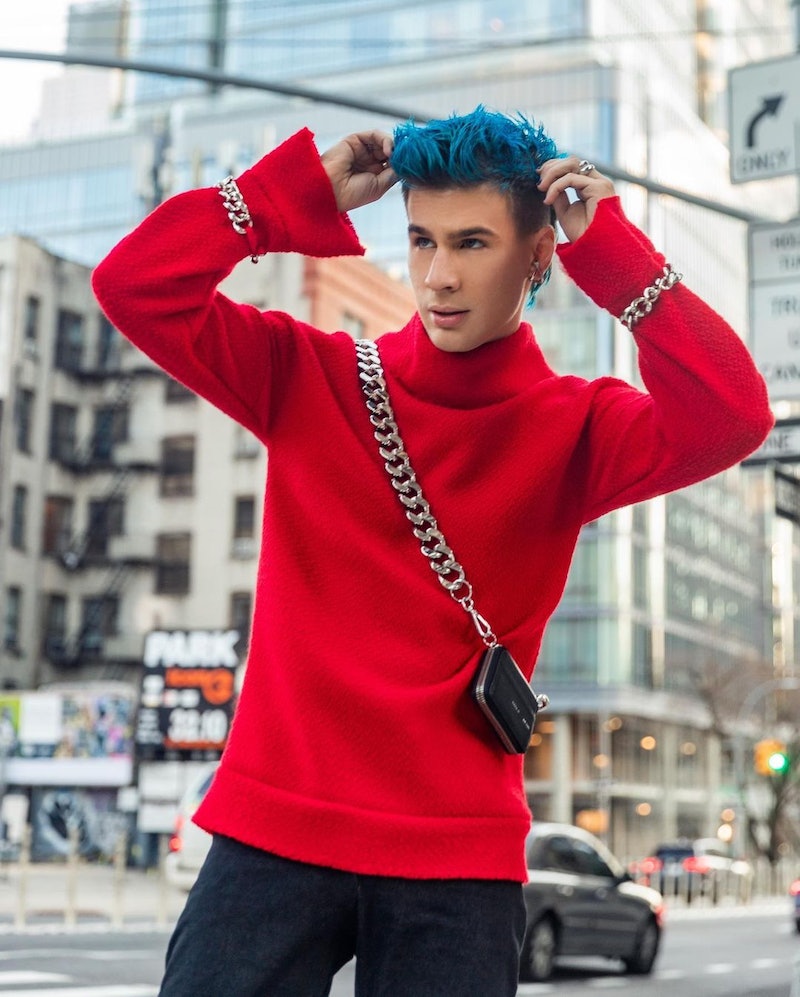 If have TikTok downloaded on your phone, it’s very likely you’ve scrolled past Brad Mondo’s popular hair reaction videos, which he began posting in January 2020. “I had no idea the success that was going to come from it,” Mondo admits to TZR over the phone. “There was a channel called React [now named People Vs Food] and I would see teenagers reacting to music videos or whatever and I was like, OK, maybe there’s a market for professionals reacting to things.” Indeed there was, as proven by Mondo’s eight million followers and over 207 million(!) likes on the buzzy app. In fact, in between his highly requested TikTok videos and hair care brand, XMONDO, the 26-year old is taking the industry by storm.

“I think deep down I always knew it was the path for me,” Mondo says about his journey to doing hair professionally. In fact, a lot of his childhood was spent in his father’s hair salon in Franklin, Massachusetts. However, it turns out during his teenage years, Mondo was reluctant to follow in his family’s footsteps. “I wanted to do my own thing,” he explains. But as much as he tried to fight it, Mondo kept finding himself going back to hair, and came to terms with his calling. “I spent every day after school at the salon doing my friends' hair,” he explains. “I finally admitted to myself, OK, I'm a hairdresser.”

Mondo noticed how many opportunities there were in the hair industry, beyond working in a salon. “Once I realized that I was like, I’m going to move to New York and start my career there.” After he landed in the NYC, Mondo turned his long-time obsession with YouTube into a profession. “Every day after school [when I was 13 or 14] I would watch so many different YouTubers — I always looked up to them,” Mondo says. “I thought it was the coolest career because you can be you and create whatever you want once you have subscribers that follow you.”

His booming YouTube channel — which now has over seven million subscribers — later led him to create his own hair care brand in 2019, XMONDO. As it turns out, creating a line was something Mondo always envisioned as a child. “That brings me back to my dad’s salon — I was obsessed with products,” he says about the inspiration for creating his brand. “I would bring home bags full of products and sneak them out of the salon,” Mondo explains. “I was fascinated by the packing, the scents, and how they were formulated.”

When he first thought about creating his brand, making it diverse was of the utmost importance to Mondo. “I would look at the ads [growing up] for these hair care brands and think I don’t see anything I can relate to — it was always very pretty white girls,” he explains. “Even at that time, I really wanted to see more diversity in brands.” Now, he makes it his mission to create an inclusive brand through its social media platforms and advertisements.

Additionally, Mondo strived for XMONDO to have a cool, relatable factor. “It’s not trying to be a really professional and refined brand — it’s just really who I am at that very moment and I want to represent that through the products, and create [formulas] that are easy to use,” Mondo explains. The two-year-old hair care line offers up everything from shampoo and conditioners to semi-permanent colors.

Now, back to his viral TikTok reaction videos. You can probably imagine, or perhaps have witnessed for yourself, Mondo reacts to some pretty wild, head-turning hair transformations on the popular app. Below, the hair guru revealed the top five most memorable videos he’s come across — ever. Spoiler: Prepare for your own jaw to drop.

“This came soon after we launched these colors, and watching people use my hair care line is so exciting,” Mondo says. “I love seeing people do these creative colors at home and things that are out of the ordinary. She just has the most gorgeous, flowy, thick hair, and I think it looked amazing.”

If you’re on TikTok regularly, there’s a very good chance you saw Charli D'Amelio’s front pink strands back in October 2020. But as it turns out, the TikTok star didn’t initially have the wild look in mind. “Before we even did this collab, I was like, what do you want to do with your hair?” Mondo explains. “And she was like, nothing too crazy. I don't know if I really want to do color.” But, in typical Mondo fashion, the hairstylist arrived at their meeting and told the 17-year old they were going to do something crazy. “I was like I don't care how long you keep it, but I think we should just make an impact and do something super fun.” Luckily, D'Amelio ended up loving the color.

“People are wild,” Mondo laughs. This particular video was something the social media star had never seen before — and he thought he’d seen everything. “When people can shock me, I'm very impressed,” Mondo says. “She fully got drenched by a hose in order to wash her hair.”

Mondo finds cap highlights (putting your hair through a cap with small holes in it) to be so interesting. “It worked out well for her. I was shocked at the results,” he explains. “People sometimes try to do cap highlights and they [can] go terribly wrong, but she got lucky and she looks so pretty. That was definitely a more shocking result in a positive way.”

“She made WaveTech [Wave Foam], which is one of my wave enhancing products, go viral,” Mondo says about the video above. “She created this video just trying the product for the first time, and her hair came out so beautiful. I reacted to it and was shocked just how gorgeous it came out.” Because people were so fond of the look, Mondo says the product sold out in a matter of hours after the video was posted. “Ever since then it's just been insane sales with that product.”