The ins and outs of this therapeutic practice. 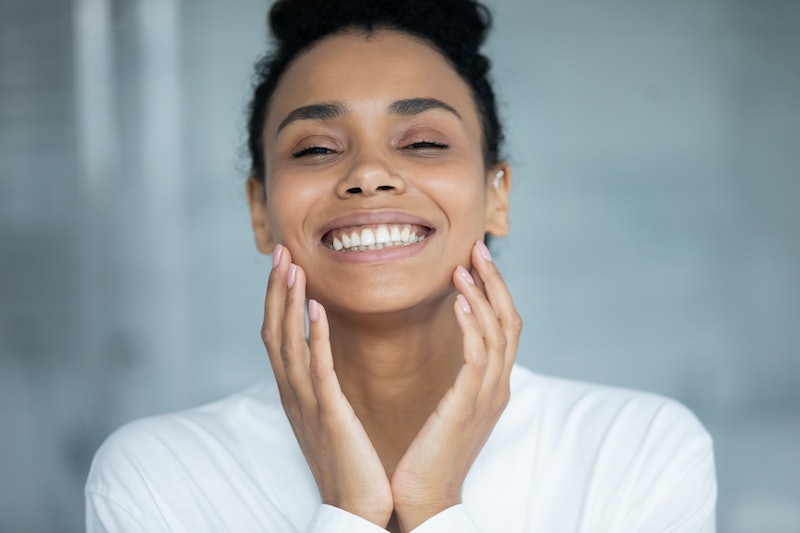 As someone who has dealt with anxiety for what feels like forever (I'm talking decades here), I am always on the hunt for holistic tools that can help me manage it: meditation, affirmations, hypnosis, breathwork, journaling, syncing my self-care to my menstrual cycle — you name it. Another tool that has been a total game-changer for me: EFT tapping.

EFT tapping (or emotional freedom technique) is a healing modality that involves — you guessed it — tapping on different acupressure points on the body while saying statements out loud that relate to whatever issue you're dealing with, such as stress, anxiety, or any other physical or emotional pain. Gala Darling, an author and speaker who teaches tapping inside her courses and memberships, describes the technique as acupuncture minus the needles mixed with positive psychology. The beauty of the technique, besides its simplicity, is that once you learn the pattern, you can practice it on your own anytime you need it.

To be clear, the benefits of this practice can vary person to person, and it’s in no way a fix-all for all your mental and physical ailments. However, it could be a nice supplement to your current self-care ritual.

Keep reading to learn more about EFT tapping, its benefits, and a step-by-step guide on how to do it.

What Is EFT Tapping?

EFT was developed by energy psychology practitioner Gary Craig in 1995 and works with the body's energy system. "In EFT, you are both directly tapping on physical parts of the body to move and release energy, while also verbally speaking aloud and addressing the pain or stress point directly and its impact on you," says Kelsey J Patel, an author, certified reiki master, motivational speaker, and meditation teacher specializing in EFT.

The pressure points used in EFT, Patel adds, have long been used in Chinese Medicine and are considered energy meridians where chi or energy flow can become trapped or blocked. She explains that tapping helps clear the energy blockages, which clears the emotional, mental, and physical symptoms.

So, how exactly does tapping do this? According to Darling, tapping on the meridian points reduces activity in the amygdala, which is the fight or flight response in the brain. This, she adds, lowers cortisol levels (aka the stress hormone) and sends the signal to your mind and body that you are safe. It should be noted that tapping works on a myriad of issues. Patel says many people use it for anxiety, stress, physical pain, and support with other stress-related trauma or experiences held in the mind and body. Darling refers to tapping as the "remover of all obstacles" and recommends experimenting with the technique on different issues.

The emerging research behind tapping's effectiveness at delivering psychological and physical benefits is very promising. Research has shown EFT can help decrease anxiety, depression, post-traumatic stress disorder, pain, and cravings while increasing happiness. One 2020 study, in particular, showed that one hour of tapping reduced cortisol by 43%.

Furthermore, some see tapping as a great tool for goal-setting, although there’s no substantial research behind it. "I believe tapping and manifesting is the secret recipe for getting everything you've ever dreamed of," Darling says. "We can use tapping to remove our limiting beliefs, implant newer, more powerful ones, help us move toward the thing we desire, and release our feelings of scarcity."

Everyone's experience of tapping will be different in the way it helps shift mental, physical, and emotional energy. However, across the board, Patel notes that most people report feeling lighter, calmer, and more peaceful after tapping.

How To Practice Tapping

Decide what issue to tap on

First, decide what issue you're going to focus your tapping session on. Patel recommends something that's currently bothering you, whether physical or emotional such as fear, anger, panic, or sadness. Then, she advises rating the intensity of the feeling on a scale of 0 to 10, with 0 being non-existent and 10 being the highest intensity.

Start with the setup statement

Next, Patel instructs using four fingers (pointer, middle, ring, and pinky) of either hand to tap on the karate chop point located on the outer edge of your other palm. As you tap, say this statement out loud: "Even though I have or am feeling [state your problem], I deeply and completely choose to love and accept myself." Repeat this three to five times to help you tune into the issue.

Tap through the points

As you tap on each point, Patels says to repeat the problem out loud, such as "fear of heights" or "anxiety" or "overwhelm.” Repeat this for a few rounds until you feel some relief.

It may sound counter-intuitive to focus on the issue when you're trying to release it, but there's a purpose to it. "We say the negative statements because tapping is about finally facing what is going on inside us," Darling says. "We are acknowledging what is imperfect in order to release its power over us."

At the end, Patel says, close your eyes, take a few full deep breaths, and check in with the rating to see if it decreased in intensity. Even just a few minutes of tapping, she adds, can help manage uncomfortable feelings because tapping helps the body physically process the feeling and release it.