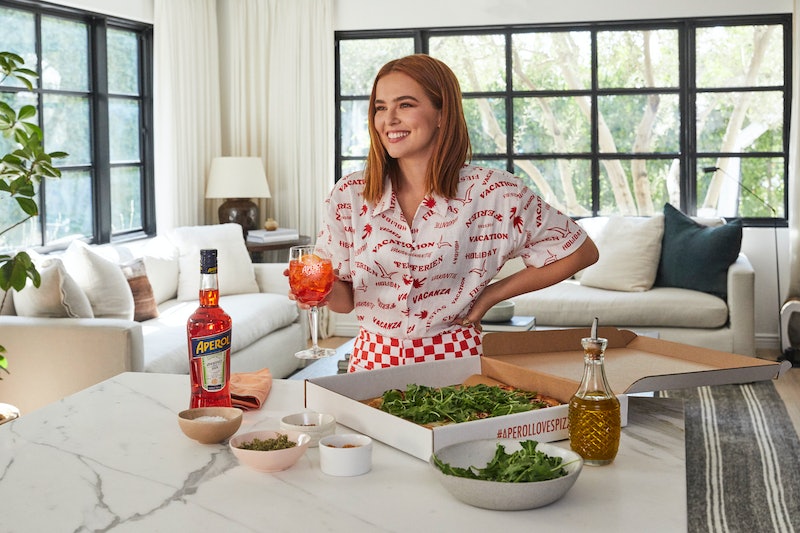 Even if you're not particularly hungry, hearing Zoey Deutch talk about pasta (and food in general) will deliver an almost-instant hankering for carbs. "I love to cook, everyone in my family cooks," says the actor, whose mother is actor Lea Thompson, in a phone interview with TZR. "So, it's been engrained in my DNA from a very young age —.the joy of cooking."

As the master of her own Los Angeles domain, The Politician star has carried on her family's cooking torch, transforming her kitchen into a sort of culinary lab. "I love to follow and try out new recipes but, inevitably, I go off the rails and do my own thing," she explains. "I'm definitely someone who tries to use what I have in my fridge rather than going out to the store every time to find ingredients for said thing."

This "off-the-rails" process has manifested itself into a full-blown talent. Deutch's self-made menus often feature decadent dishes like chicken piccata, lemon ricotta pasta, skirt steak with chimichurri sauce, and the occasional salad. "I make my own Caesar dressing, cut up some stale bread, sprinkle it with oil, salt, and pepper, and put it in the oven to make croutons," explains the actor, her voice speeding up slightly with enthusiasm over her home creations. (Hungry yet?)

As it happens, Deutch's make-it-up-as-I-go approach to cooking is how she came to create her now-famous vodka tomato sauce (featured below), which the California native says she puts on everything from pasta to pizza. "[This sauce] was sort of an amalgamation of a lot of different recipes," says the 25-year-old. "I put that recipe together in March or April [of 2020] because I had posted about it, and people were like, 'What is this?!' I finally understand the difficulty in actually writing out a recipe, because I'm so used to just tasting as I go."

And while many are baking up confections and spongey breads at the moment, Deutch says classic Italian dishes are her idea of cozy, fall comfort food. "Paired alongside an Aperol spritz, and you've got my dream meal," she muses.

In fact, the actor explains that baking is one aspect of the cooking world that she generally avoids. "I don't like it because it requires you to really follow a recipe — it's chemistry," Deutch explains. "That said, I have dipped my toes in the banana bread chapter of the quarantine life. I put Rolo chocolate in my [banana bread] and it came out really delicious."

When not eating Rolo-infused loaves of bread or decadent bowls of pasta, Deutch can be found taking online Italian lessons ("I'm failing miserably"), bingeing The Sopranos ('It's a real commitment"), and reinstating her long-gone fitness routine. "I didn't work out for eight months," says the actor (who tested positive for COVID-19 in May, but has since recovered). "I finally understand the age-old [notion] that working out is good for your mental health. I'm deeply on board with that."

Also good for the mind? Pasta. In fact, to help you better understand Deutch's devotion to Italian fare, below her Insta-famous vodka sauce recipe. (And, because this is straight from the actor, be warned, it does not include exact measurements. So, as Deutch says, "eyeball it.")