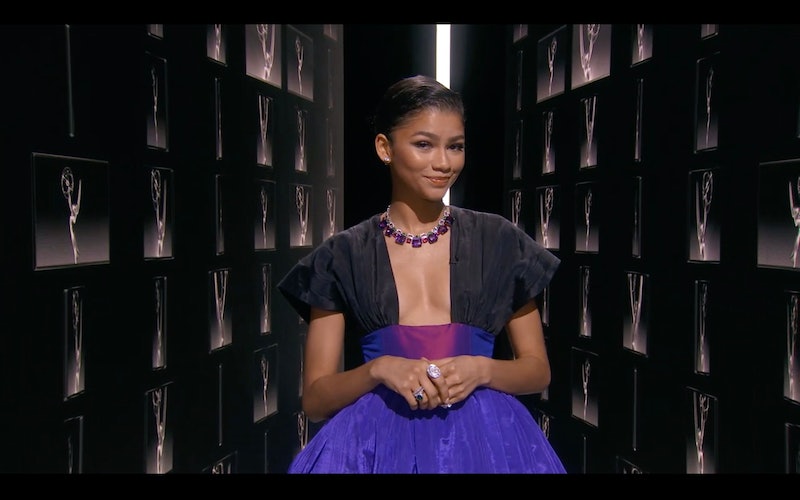 The 72nd Annual Emmy Awards was memorable for a number of reasons. In addition to its virtual format, the show was also complete with a momentous win or two, including that of Outstanding Lead Actress in a Drama Series, which was won by Zendaya. At 24-years-old, the Euphoria star was the youngest actor to win in the category. And while this in itself is major, Zendaya's two Emmys gowns also left viewers something to talk about for the weeks to come.

At the start of the show, the actor wore a color-blocked moire and taffeta gown from Christopher John Rogers' Fall 2020 ready-to-wear collection. Zendaya complemented the jewel-toned ensemble with a BVLGARI High Jewelry necklace in white gold with amethysts, rubellites, emeralds, and pavé-set diamonds. On her feet, she wore crystal-embellished heart pumps by Christian Louboutin. The colorful look helped her kick off the show right as she fulfilled her presenting duties at Los Angeles' Staples Center.

For her ground-breaking win (which she accepted at home with friends and family), Zendaya changed into a Giorgio Armani Prive two-piece gown, which featured a studded bralette top and full princess skirt set against a vibrant polka dot print. The star went for a vintage beauty look to juxtapose the modern silhouette, piling her hair high in a perfectly undone updo á la Brigitte Bardot with winged eyeliner and nude lips. Her speech was one of hope and gratitude, as the actor made a point of thanking protestors: "And I just want to say to all my peers out there doing the work in the streets, I see you, I admire you, I thank you, and yeah, thank you so, so much!"

For her Emmys looks, Zendaya turned to her longtime stylist and "image architect" Law Roach, who kept fans posted on the actor's outfits throughout the evening. "She’s a WINNER baby......." the stylist wrote in his post featuring the star in her custom Armani gown. She's a winner indeed. If the Emmys were any indication, Zendaya is one to watch for years to come.