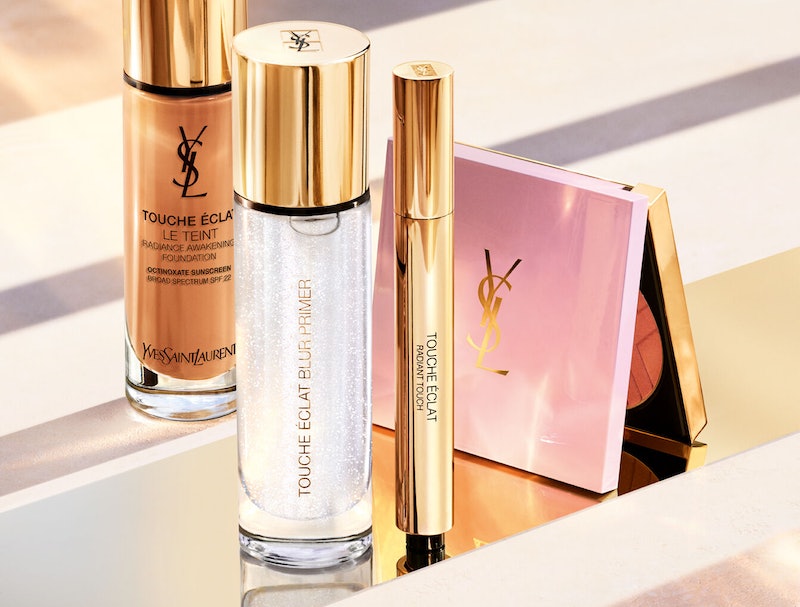 Few makeup collections have captured the collective heart of the community quite like YSL Beauty's game-changing Touche Éclat. Launched in the early '90s, the original Touche Éclat All Over Brightening Pen has inspired countless new products in the glowy makeup family since its debut almost 30 years ago. For those keeping track, this includes foundation, concealer, moisturizer, and — as of Feb. 1 — YSL Beauty's new Touche Éclat drop: the 3D All Over Glow Powder and Blur Primer Silver.

The latter of which may inspire a trip to Sephora's website all on its own. The just-released Touche Éclat Blur Primer Silver is the cool-toned version of the cult-favorite Blur Primer Gold — which currently has a 4.4-star rating at the beauty retailer out of more than 2,000 reviews. Retailing at $52 per 1-ounce tube, the new (but just as shimmery) version of the luxe primer glimmers with visible silver flecks, suspended in the silicone-based formula.

Whereas some modern primers can be worn with or without foundation on top, the silver Touche Éclat primer shines when you layer complexion products over its glitzy formula. The radiance-boosting flecks melt into your foundation for a lit-from-within effect — making it incredibly easy to see why the original gold primer has won over so many Sephora shoppers.

It doesn't outshine the other drop, though; the $48 Touche Éclat 3D All Over Glow Powder is called a "glow powder" for a reason. It's not quite a highlighter, not quite a bronzer, with a warm-hued shade that YSL Beauty lists as universal. With mica noted as its second ingredient, expect to see some major sparkle when you apply it — this isn't your subtle, skin-matching brightening offered by the original Touche Éclat pen.

Which just goes to show how YSL Beauty is adapting the iconic collection to a new era of makeup trends, something that often involves as much visible glitter as possible. You can find the new Touche Éclat products on YSL Beauty's website, or at select stockists like Macy's or Sephora. Below, the new Touche Éclat 3D All Over Glow Powder and Blur Primer Silver.