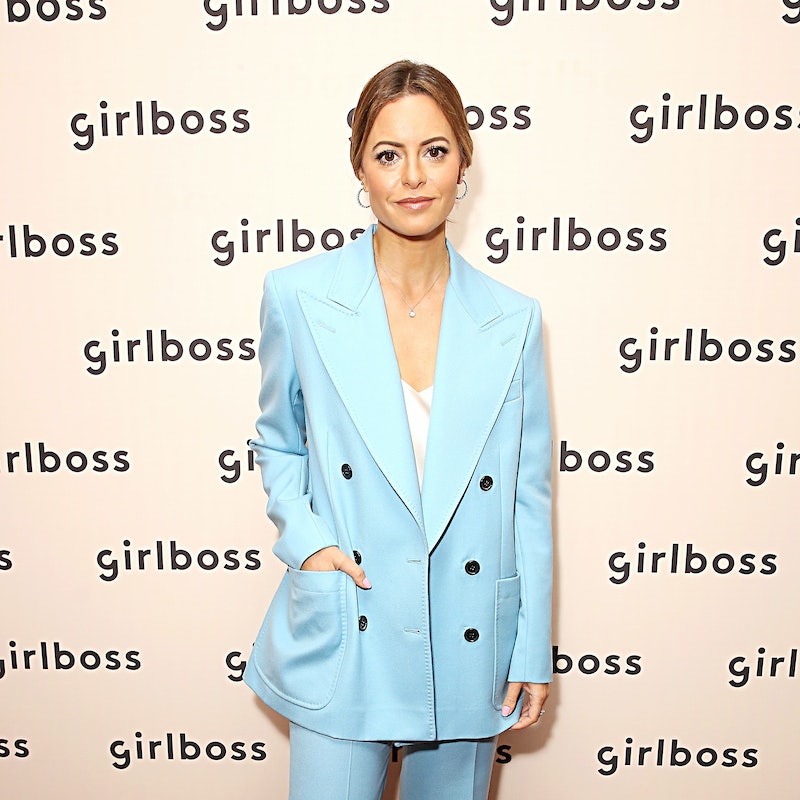 Sophia Amoruso has never been one to mince words. From honest, unfiltered career advice to candid conversations about her struggles with mental health, she's a straight shooter. So, when I came across recent videos of her addressing relevant issues like the push for productivity while quarantined (and why it's overrated) and the realities of living with anxiety amidst a pandemic, I watched every single one thoughtfully. And, apparently, I wasn't the only one.

"I [haven't really been] on video on any social channels until now, and I feel like I was a little late to the game, but it's been super fun and really performed," says Amoruso after I noted her transparency on social media in a recent phone interview (facilitated by self-care brand Skintimate). "I hate the word [perform], but thank you for that."

While many are taking to Instagram, TikTok, YouTube, and the like with their homemade loaves of bread, go-to HIIT workout routines, newly knitted sweaters, and KonMari-method closets, some are finding productivity to be not only undesirable, but impossible. And Amoruso says this is just fine. "We're all coping in different ways," she says. "For some of us, working all the time and staying busy is a version of coping, and that's OK. Some of my high-profile friends are [...] sharing their creativity or self-care and it's really inspiring. But, for the rest of us, we either can't afford that or maybe we don't have the time for that."

And for some, the will to be ultra-productive is just not there. On her April 14 Instagram post, Amoruso wrote bluntly: "For some of us, coping means doing absolutely nothing. Regressing into teenagedom. Chug brownie mix. Chug coffee. Sleep. Cry. Stare at a wall. And that’s okay. Whatever you need to do, or more importantly NOT do, right now is okay."

This empathy is not just directed to her 624K Instagram followers. Over the years (and in recent weeks), Amoruso has had to focus this acceptance on herself as well. "[Mental health] is something I've always been a little scared to talk about because I have a team, and I don't want them to think their CEO is 'unhinged,'" says the entrepreneur. "I've always had investors, and speaking publicly about anything that would limit my ability to perform as well as I can as a leader is something I've been afraid of expressing. But it feels like we're all experiencing the same thing right now, and I'm more comfortable talking about it."

In addition to therapy (which she attends twice a week via FaceTime), Amoruso says she learned to cope with her own anxieties in the simplest and most mundane ways. "I'm going on walks," she explains. "I went on a walk the other day and talked to my three poodles the entire time — and didn't care if anybody heard me. I said hi to every person I passed, and it was incredibly mindful."

Another place she's finding tranquility? The shower. Yes, the entrepreneur says her daily 10-minute shower meditations are effective in quieting her mind.

"I learned about being mindful in the shower from Oprah's podcast, believe it or not," Amoruso says. "We all have that time every day. Sometimes, I just want to make to-do lists in the shower. But if we reframe that time when we're not on our phones, and just quiet our minds instead of think about things that aren't happening [...] it's a really powerful thing." So powerful, in fact, that the business woman partnered with Skintimate on audio meditations and a seven-day meditation challenge (kicking off on April 23 via Amoruso's Instagram account) specifically designed for the shower, incorporating the brand's new body care line.

"Each day, everyone can try one of three five- to 10-minute meditations, and each of them is a theme: Relax, Confident, and Energize," explains Amoruso of the new sessions, which were crafted by mindfulness expert Shauna Shapiro, PhD. "Hopefully, through something as simple as prompts on social media, we can change the mindset, lower the anxiety, and create new rituals for a lot of people, which feels really good."

It's also much easier than making your own bread.