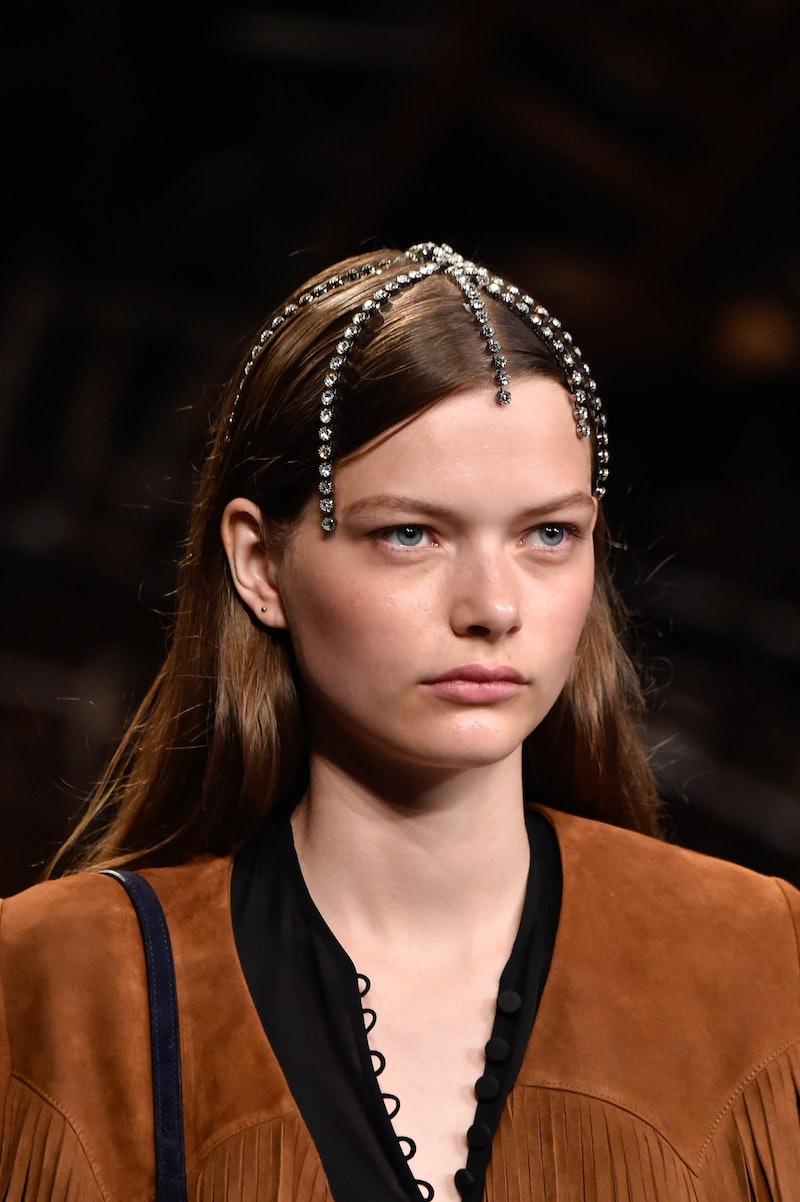 As the global creative director of care and styling for Wella Professionals, Souleiman is known for his highly editorial, over-the-top hair creations — likely because he got his start in the art world. “I filled in a career advisory form while in art school, and an advisor recommended [hairstyling],” the London-born, Sassoon-trained stylist tells The Zoe Report. “Best advice of my life. I didn’t choose hairdressing as a career, but once I started, I absolutely loved it.”

For someone who seems like a bit of a maximalist — crystal hair chains, geometric color splotches, and glitter-slicked side parts are just a few of his signatures — Souleiman broke into the industry in an unusual way: via fashion’s most famous minimalist. “Obviously, my biggest break was the Jil Sander campaign in the mid-’90s,” Souleiman says, referencing his iconic work with model Guinivere Van Seesus. The 1996 shoot offered a first look at one of the decade's most enduring ‘dos, recently emulated by Dua Lipa at the 2020 Grammy Awards: straightened strands, twisted back and flipped up, with a crown of undone, piece-y spikes. “From there, everything snowballed,” he remembers. “I can’t thank [the photographer] Craig McDean and the legendary French art director Marc Ascoli enough for believing in me.”

Souleiman has since collaborated on editorial shoots and runway shows alike with Junya Watanabe (the punk cut pictured below), Khaite NY (the crystal crowns in the main image), and most recently, John Galliano at the House of Maison Margiela (on the sudsy roots, below). “Geniuses in the fashion industry,” the stylist calls them, saying, “I work with designers that challenge me creatively, and I love this.”

Next up: styling for Thom Brown, Junya Watanabe, and Yohji Yamamoto (among others) on the upcoming Fall/Winter 2020 Fashion Week runways — although Souleiman can't reveal the details just yet. “You can’t freestyle a runway look as you can an editorial,” is all he'll say. “Runway looks have to be done much faster, due to the logistics.”

To keep things running smoothly backstage, the stylist tells TZR he “love[s] to work with music and create a great working environment” for his team. Of course, he also has his favorite products at the ready: “Wella Dynamic Fix Crafting Spray, Wella EIMI Sugar Lift Sugar Spray, Wella Luxeoil Light Oil Spray, and Wella EIMI Root Shoot Precise Root Mousse,” he says, as well as “the Mizutani scissors that I had the opportunity to design my liking.” (That would be the custom-created Hybrid by Eugene Soulieman tool, which you, too, can own for a cool $1,300.)

As for how he’ll wield those particular products? Souleiman is remaining tight-lipped until showtime. “[I look forward to] collaborating with designers, makeup artists, and stylists to create the looks, but it’s too early to say,” he says, with an audible twinkle in his voice. Whatever he comes up with, it’s bound to be iconic.