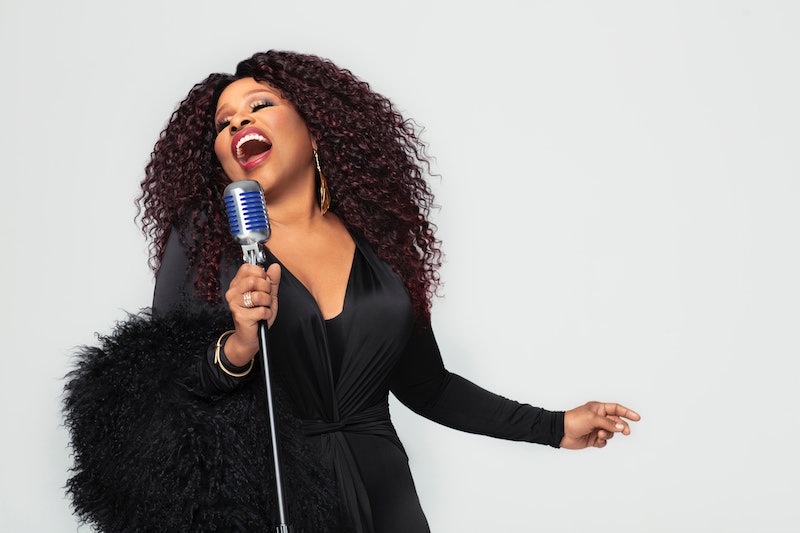 Influencers are cool, I guess, with their subscribers and likes and all of that #sponcon. But there's a difference between being an influencer and having actual influence. Chaka Khan, she of 10 Grammy Awards and 41 solo singles, obviously falls into the latter. I shouldn't have to run down her credentials... the multi-hyphenate is a living legend. But the entertainer's glam — specifically Chaka Khan's hair — would have even the most influential of influencers quaking.

Fun fact: if you search YouTube, you'll see thousands of hits on how to get Khan's disco waves or larger-than-life volume. Now, the superstar is making it easier to emulate her own looks with Chaka by Indique, her newly released collection of wigs. "I've been in this business a very, very, very, very long time. I started when I was like, 17. I'm now 66. I've acquired a great deal of knowledge. I think it's about time I share it," Khan, clad in a fitted sweater dress and vintage Ferragamo boots, tells a small group of reporters at a New York City launch event on Apr. 25.

To impart that knowledge, she teamed up with her longtime hairstylist George Robert Fuller and Ericka Dotson, Indique's co-founder and creative director, to glean inspiration from her own archive of iconic beauty moments. From that, two to-die-for looks were born: the iKhanic Curl and the iKhanic Straight. According to Dotson, the process took a bit longer than expected in order for everything to be perfect... but Fuller, who's worked with Khan for decades, notes that this launch is one that's always been in the making.

"[Hair] has always been her platform. So it makes sense for her to speak on something that's true to who she really is," he notes. "She's doing it with integrity. She hasn't been walking around here with a perm for the last 40 years, then decided 'Oh my gosh. There's a craze. Let me start doing hair pieces, clip-ins, and wigs for people.' She's really been true to the movement, which is about empowering women — especially Black women — to be who you are naturally and embrace the beauty in yourself."

Believe it or not, but Khan didn't realize until she was an icon until, well, now. "This is why she'd never do this before," Fuller says, as Khan nods. "She's just realizing that she's that pretty and beautiful." In part, it's because critics were concerned about what she was wearing rather than her crowning glory, especially in the '70s.

"There was more issue about my shape, when I had my belly out and the bra tops. That was just for comfort. I designed those clothes... I'd take a bra and have a guy cover it in fur, then get some wraparound pants in leather," she describes. "It wasn't about being stylish. I was paying homage to the Blackfoot Indian in me. I had a phase where I paid homage to the Asian in me. I paid homage to the African part of me with my natural hair. But they were always more interested in my butt than my hair."

While the natural hair movement of the sixties and seventies is resurfacing now, it doesn't come as a surprise to the team... because it's something that they've always done. "Chaka's not jumping on a bandwagon," Fuller clarifies. "She's always done her own thing."

Another Chaka Khan trademark that she always tends to see? Her signature deep auburn hue. "Every time I turn around, some heffa got red hair!" she cackles... but it won't stop her from rocking it. "As the summer goes on, we'll go brighter and pinker. In summer and winter, we go back down to a darker color. It took me a long time to find this red." If she does happen to trade up, Khan already has a look in mind: "Animal. I want to do animal. Animal hair, yes. I really do. Tiger. Tiger would be gorgeous. We got to do that."

Clearly, Khan isn't shy when it comes to change (Fuller notes that she's "a lot more fun" these days). But she is somewhat of a traditionalist when it comes to skincare and wellness. "Zinc is good. You can buy it over-the-counter and put it on your oily spots before you go to bed," she recommends. Not that she has that problem anymore. Her skin, for the record, is just as flawless as her hair, outfit, nails, and literally everything else. "I drink a lot of water now, and I eat differently than I did before," she admits. Other faves include neem oil and black seed oil, the latter of which she takes with water. Preferably two glasses of warm... "almost hot," to be exact. "Cold water is a shock to your system," she warns. "Don't ever use ice again. You will see such a difference." (We couldn't find a doctor to back that up definitively, but Khan also swears by turmeric, too — and have its benefits on record.)

"I'm an elder. I had to put myself in that space," she half-jokes, half-admits. "Otherwise, I'd be acting a damn fool! I gotta keep myself straight, and keep my mindset right." That's why she opted to do hair first... a curve-friendly clothing line is next up, and Ask Chaka Anything, an anonymous question forum for youth, fans, and anyone else who wants to connect, is coming down the pipeline, too.

But since I had her right in front of me, I asked one more burning question of the superstar: what does your hair mean to you? "I think that hair is powerful. Like Samson. I believe that there's power in hair. It means a lot, how you treat it. It tells everyone how you are. Your hair makes a major statement. It's everybody's crown of glory," she muses, before breaking into that killawatt smile. "Well, if you got some!"