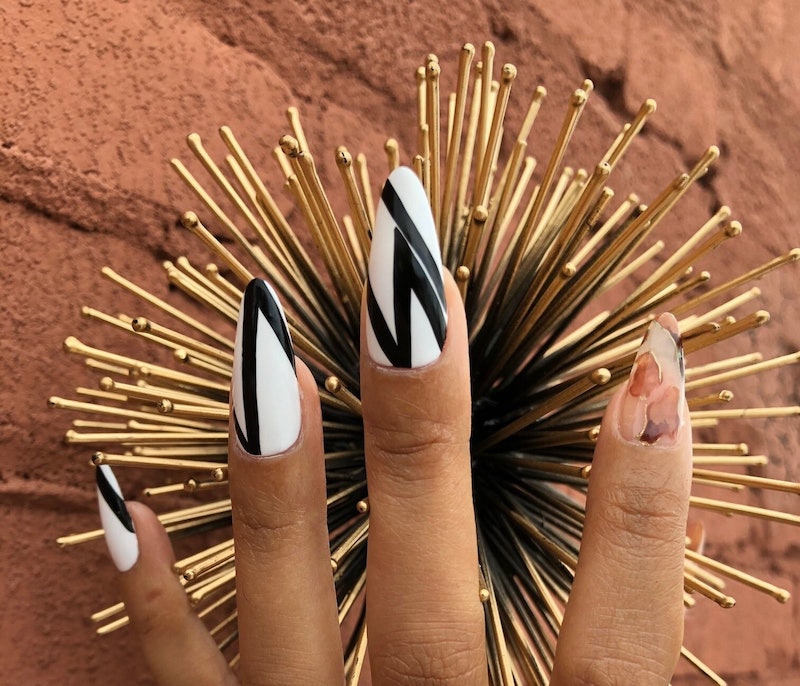 On Jul. 31, Beyoncé left all of us mesmerized and inspired with her visual album Black Is King. Filmed across Africa and the Middle East, the phenomenon showcased the rich history of Black culture through music, cinematography, fashion, and beauty. The cinematic masterpiece has become a source of inspiration just about everywhere, and now, Black Is King-inspired nail art is our latest obsession that goes much deeper than just aesthetics.

"Beyoncé always has the ability to draw you in through visual eye candy," Kia Stewart, celebrity nail artist and founder of 1209 Wellness Non-Toxic Studio, says. "As a nail artist, I watched this and saw an abundance of my favorite things: prints, hues of greens, and shine. All those things made this an exceptional experience. As usual, she sets the bar for aesthetic and execution, while still highlighting her many others gifts." And Trenna Seney, editorial nail artist, agrees. "Black Is King was so mesmerizing," she says. "Everything from the production to the outfits to the colors was so enticing, and every scene just got better and better." And for the artist, who's rewatched the visual masterpiece dozens of times, she says the nail inspiration came naturally. "I knew immediately that I wanted to create nails inspired by what I saw," she says.

However, while the visual album came with multitudes of makeup and hair highlights, Stewart says there was one aspect of beauty that was missing. "I actually was sad after watching it," Stewart says. "I felt that hair had amazing moments, makeup was on point, and wardrobe was impeccable, but there were no stand out nail moments. I didn't feel like people walked away thinking, 'Wow, her nails impacted me.'" Stewart says that the work she and other nail artists are doing has the ability to change that. "It is amazing to have this moment to give feedback on Black is King because with all the talent emerging in nails, as a community we were all inspired," she says. "I personally was inspired to not settle, to be inclusive, and to be expressive unapologetically." She says it comes as no surprise that Queen Bey's artistry has impacted so many arenas. "Beyoncé has the skill to remind you to want more, and do more with your talent," she says.

"The silhouettes and the color contrast speak to what I love to execute in nail art. Black Is King was filled with moments to feed your creativity. I was inspired like many others by the cow print scene from Already, as well as the rich pinks and purples seen in so many floral moments."

And while we're a month in since the initial release of the film, its impact, particularly in nails, will continue to be seen. "I absolutely plan on doing more Black Is King-inspired nails," Seney says. "It's so tough to narrow down inspiration but I plan on creating looks inspired by Mood 4 Eva. I also want to channel Already, because if you pay close attention, Zerina Akers [Beyoncé's stylist] put a gold mesh chain on Beyoncé's head with gold hoop earrings and I want to use a lot of gold and chains to imitate this nail look. Lastly, I want to recreate something inspired by Find Your Way Back with lots of crystals."

"All of Beyoncé's looks were drop-dead gorgeous," Seney says. "But once I saw the brown cow print look, I knew that was it. First, I painted all of the nails white. Next, I hand-painted the brown cow prints one-by-one with an eye-catching brown shimmer polish. To mimic Beyoncé's horn headpiece, I added in gold charms pointed upward, along with circle charms to adorn it."

Stewart was inspired by a number of moments, most notably Mood 4 Eva, for this look she created on her hand model, Kia Marie. "The looks I chose are neutrals, nudes and true blacks," Stewart says. "Many people of color have problems finding nudes that compliment their skin tone, I created this look with that in mind. I used my favorite universal neutral nude by OPI: Samoan Sands, then used Kokoist's Blackest Black for striking and chic black accents. Finally, I used PearNova's Biscuits and Honey as a background color for the animal prints."

New York City Nail artist Gracie J was inspired by the floral, S. Garvey Collective jumpsuit that Beyoncé wore in Already. On one side of the nail, was a classic French manicure, while on the other side, florals in an array of colors.

"These are gold chroma nails inspired by the The Gift album cover," Seney says. "I painted the nails black then put foil on top to give it that wrinkled effect. After, I rubbed in the gold chrome for the dimensional look."

Leopard print reigned supreme in Mood 4 Eva, so this Seattle nail artist created the animal spots using black and gold for a simple, yet festive mani.

"In Find Your Way Back there were a lot of crystals," Seney says. "So for this look, I painted the nails black and adorned them with Swarovski crystals in an array of patterns."

All it took was the inspiration of African pastures for Stewart to create this jaw-dropping press-on set. For one hand, there was line art and negative space using grey, black, pink, and orange. For the other, she hand-painted a cheetah and created the illusion of its tail trailing for the rest of the fingers.

Yet again, Gracie J was moved by the visuals of Already. This time, however, she mimicked the brown cowhide scene, finishing the art with a matte finish to truly emulate Beyoncé's look.

When you can't pick just one scene, you paint them all. This Brooklyn-based nail artist used her craft to paint a nail mural of Beyoncé's face, and adorned the rest of the nails with inspiration stemming from many of the singer's other outfits.