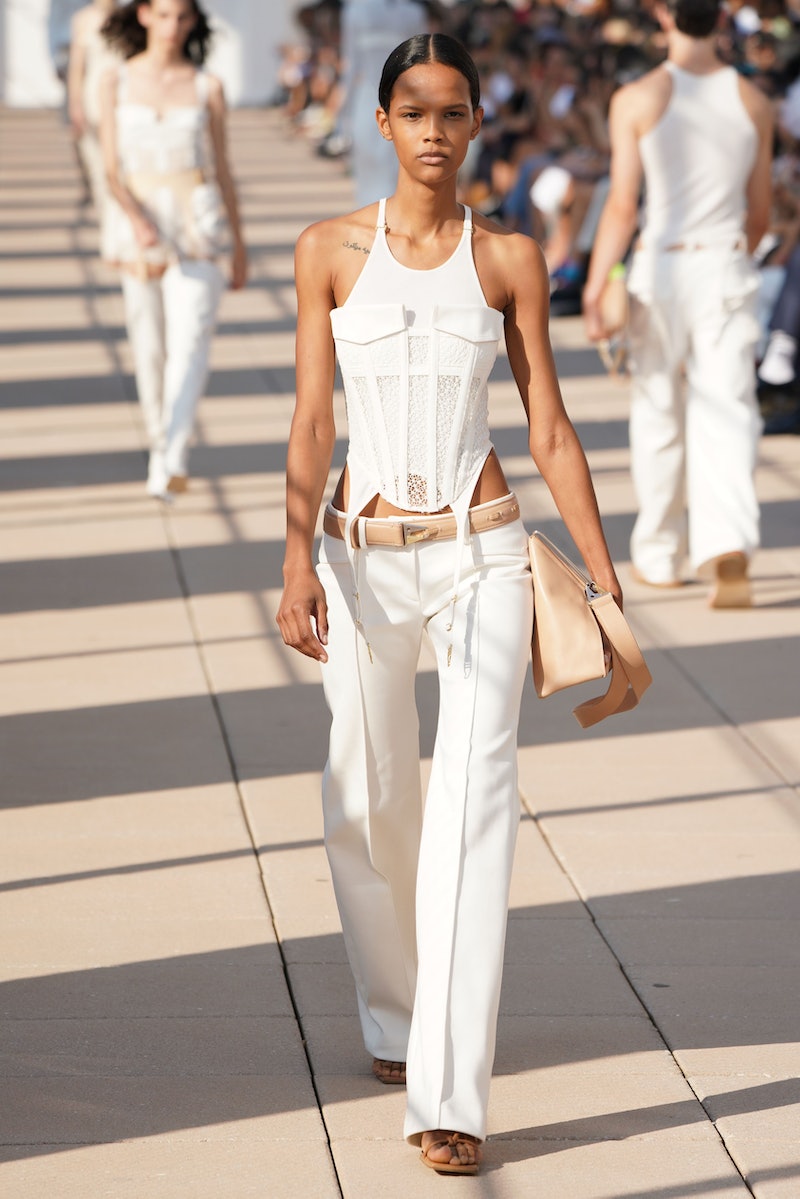 Just backstage at Dion Lee’s Spring/Summer 2020 runway show, the designer is giving a final once-over to models as he sends them out toward the audience. By his side is a fashion stylist who specializes in runway dressing, his friend Melissa Levy, who also fiddles with the fits of his signature structural wears alongside the Australian designer. It’s the pivotal final moment following a months-long, highly collaborative process among designer, stylist, and an entire troupe of creatives intent on executing Lee’s vision including a casting agent, hair stylist, and makeup artist.

“Putting a show together is really about combining all of these separate creative collaborative relationships and bringing them together to form a harmonious message,” Lee said in a Facebook video his brand posted following the runway show. While it’s Lee who takes the bow following the show’s finale, like many other designers, he relies on the help of a stylist, whose job is pivotal in helping bring a collection to life — though it's often insulated from notoriety.

When Levy works with Lee, for example, she explains that styling can be as literal as recommending a specific button in multiple looks throughout a collection in a quest for cohesion. And that those details which characterize a runway show — deciding which shoes or bags highlight the silhouettes — happen a few weeks before the show date. The most minute details, like determining the order of the collection, come much later, usually only a few days before the show after the models are cast, if not day-of. Show day itself is chaotic, and Levy says she prefers not to do any fittings, focusing instead on the other bits of the “fragile ecosystem” that make up a fashion show.

While it sounds straightforward, creating runway ensembles is about more than adding matching accessories to a few dozen looks. Stylists are tasked with understanding both the essence of a collection and a brand’s identity and translating dozens of clothing items into a cohesive vision. Runway styling today has arguably become a broader design consulting gig for many that begins long before the day of show, one which encompasses everything from offering input into the fabrics chosen for a collection to who might be cast.

“I really try not to cross-pollinate [ideas],” Levy says of the work she does not only for Lee, but for other designers and brands including Emilia Wickstead, Coach, and Valentino. “I’m there to make sure people can recognize each collection as a Dion Lee or an Emilia Wickstead collection and that one [season] relates to the previous and to the next one."

Many celebrity designers — doubly meaning those who dress celebrities and who also cultivate their own celebrity — often have a stylist-as-right-hand alongside them helping define the aesthetic that makes them recognizable. For Marc Jacobs’s signature kookiness, that’s Katie Grand; Demna Gvasalia keeps Lotta Volkova close for work on Balenciaga, while Jonathan Anderson collaborates with Benjamin Bruno.

But beyond these heavy hitters, a new class of stylists are helping catapult some of the fastest ascending brands today include Eric Mcneal, for his work captivating hundreds of people in King’s Theatre in Brooklyn for Pyer Moss last season; Clare Byrne, who helps make AREA the sparkly It-brand it is; and Solange Franklin, who refined the vision at Hellessy Fall 2019. Often, it’s not easy to identify publicly who a show’s stylist is — a credit that may be included in show notes but hardly found elsewhere, leaving the mystique of how a collection comes together in the hands of how a designer communicates that to press.

“To be a successful stylist, one of the most important things is to distinguish when a job is about you and your aesthetic and when it is not,” Adonis Kentros, who works with Christopher Kane, told Business of Fashion in 2019. “When you do editorial, it’s completely about your vision. But with other jobs, you need to put your ego and personal taste to the side to fulfill someone else’s vision.” In essence, styling for the runway means birthing a collection based on what the designer has in mind; Interpreting that collection comes later with an editorial shoot, during which a stylist may have more artistic license to play.

While stylists have been part of the runway machine for many years, their roles in the industry have evolved. The slow debasement of traditional fashion editorial means that while magazine covers and in-book editorials may have once featured a handful of brands on a yet-unknown model, many have become brand advertisements which mirror head-to-toe runway looks modeled by a celebrity ambassador. Given the shift, a runway stylist may also be the same person coordinating an editorial shoot, helping translate a brand’s vision smoothly from runway to page.

The result of shifts like these has helped transform stylists into full-fledged design consultants, those who offer input on everything from fabric choice to conceptualization. For the 2020 pre-fall collection, Emilia Wickstead wanted what Levy describes as a “stripped down” showing, a task which fell in part on Levy. “They think [Wickstead is] a West London high society girl, which she totally is, I mean she dresses Meghan [Markle] and Kate [Middleton] and all the princesses in London," Levy explains. "My challenge was to break that perception ... not remove it entirely because that is at the core of her brand, and that’s why her dresses are so beautiful. But it was about making it a bit more accessible for people to relate to.”