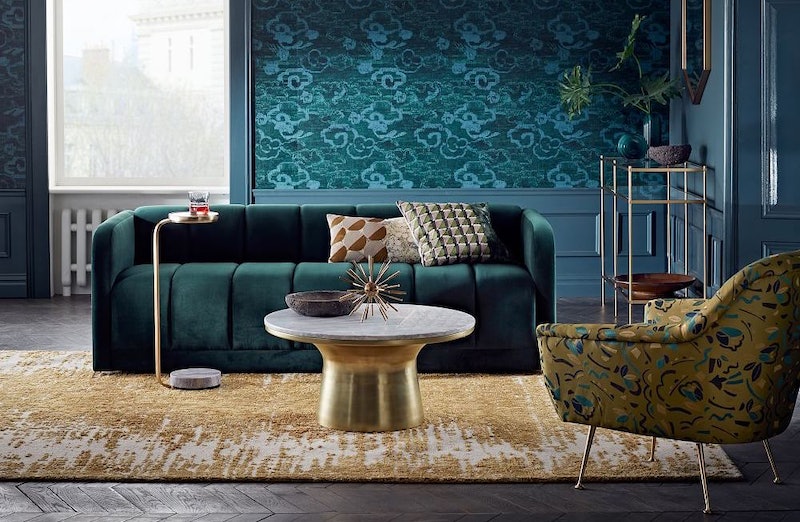 If you're looking for the perfect piece of mid-century inspired furniture, West Elm is probably the first place you turn. It's a treasure trove of vintage-looking pieces with very millennial updates, and there's always a statement piece for your minimalist apartment waiting to be found. What makes the brand even better is that its deals are good, too — there are frequent sales on various categories, so even if you can't find something affordable upon first look, you can be pretty sure that a discount is lurking somewhere in the near future. That rings true now more than usual, because West Elm rugs, furniture, and more have been marked down in a major sale for a limited time.

While you probably thought Labor Day weekend sales were the best time to overhaul your home decor, West Elm might just be proving you wrong. Right now, its sale includes 20 percent off rugs and bedroom furniture, 30 percent off tabletop, furniture, and lighting, and up to 60 percent off markdowns — meaning there's a deal to be had on pretty much everything.

The best part is of these markdowns that there are also some classic pieces that West Elm does so well included in the sale. Its sleek marble-topped coffee tables are a sought-after (and much Instagrammed) item, and there are three different styles currently marked down to as low as $349.99. Its simple leather chairs are also not to be missed, with a few that are currently up to 30 percent off the original price.

It's not just basics that are on sale, either. Statement pieces like the Bardot Sofa, a green velvet couch that's marked down to $999.99, and the Phoebe Chair, a pop art-covered piece that's now priced at $299.99, are in the mix among other items made to bring a pop of personality to your space.

If you're not looking for furniture, there's also tons of general decor at very, very low prices. Pillows under $10, throws under $20, and even vases under $7 are just a few of the steals you can snag to give your home a mini refresh for fall.

Though there's no set end date to these deals, you'll want to jump on them fast — each one is set to last for a limited time only, and the extra discounts on markdowns will only be happening while supplies last.