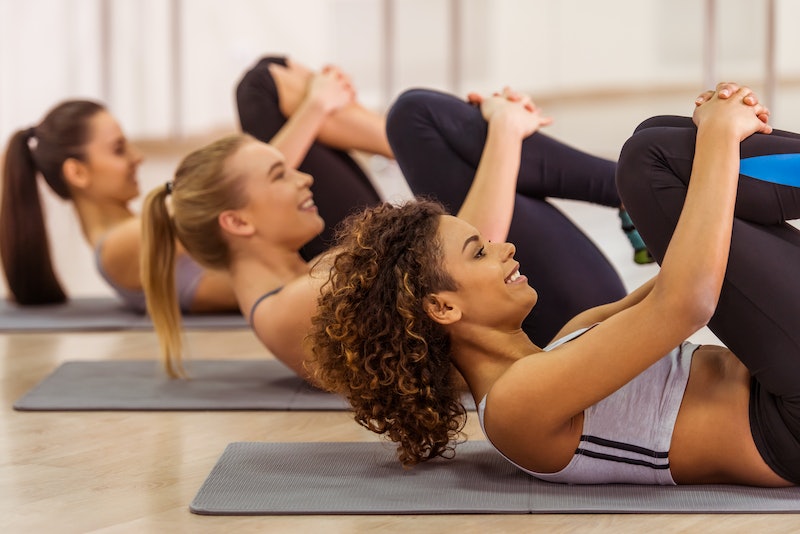 In the opening scene of the new Hulu series Shrill Aidy Bryant’s character is cornered in a coffee shop by a personal trainer who insists “there’s a small person inside” dying to get out of Bryant. As infuriating as it is, the interaction is actually based off of Bryant’s real life and truly mirrors the day-to-day challenges many people face in relation to their bodies and exercise. My realized sentiment over watching this TV moment couldn’t have been more serendipitously timed, as I also happened to be headed to Texas to experience a popular viral fitness app specifically designed to combat this form of body criticism and shaming.

I admittedly hadn’t heard much about Bethany C. Meyer's the be.come project before attending the The Retreat by Funkshion in Austin, but I knew it was a mix of yoga and pilates combined with some dance. What I learned after the weekend was that it is simply so much more than that. “the be.come project came out of a really personal space,” Meyers tells The Zoe Report. “I was in fitness for over 10 years and I had an eating disorder. I spent a lot of time in the mirror hating my body and I realized through training clients that this was a reoccurring theme.”

Becoming fed up with their disordered eating and body dysmorphia, Meyers made a rule: No working out unless there is a purpose behind it — and it couldn’t be vanity. “It couldn’t be like ‘oh I ate too much this weekend and now I have to go take a spin class’ it had to have real purpose, like feeling empowered on a day I had a big meeting. In doing that I started creating different motives for the reason why I would move and I started to have this new appreciation of my body.” Once this shift took place Meyers brought that message to the masses and eventually founded the be.come project a little under a year ago.

Ahead, read more about my experience taking Meyer’s class, and why I’ll really truly never look at fitness the same again.

Meyers is based in New York City and you can take the in-person class on Mondays at Studio B. However, the ethos behind the be.come project is about movement no matter where you happen to physically be that week. The be.come project is a $35 monthly app subscription and each week you download one 25-minute routine that everyone else is simultaneously doing (in other words, there is no library of content to choose from). "Every single person is doing the same routine at the same time, which creates a connection back and forth because they feel like they’re part of my class — because they are," Meyers says. You can do the routine as many times as possible in the span of a week; at The Retreat we did it twice and I was surprised by how quickly I was able to memorize the movements and let loose the second time around.

Meyers is a member of the LGBTQ+ community and identifies as queer and non-binary. Though the be.come project is inclusive to all (perhaps the most inclusive fitness program I have ever encountered), it especially resonates with individuals who have not felt safe or comfortable in gyms and workout classes because of their gender identities. "I think when it comes to fitness we don’t consider what it means for somebody who is trans or non-binary identifying to go to a studio or to choose a locker room or go to a workout class and have the fitness instructor say something like, ‘Hey ladies, it’s time to get your bikini bod’ or whatever. It’s really not an inclusive space," Meyers says. People have come in to share that the be.come project has given them a space where they can experience movement and, even if it's in their home, still feel connected.

Another hugely impactful way Meyers built their community was through the branding of the be.come project. "When I was launching the website I went onto Instagram and said 'Hey, if you feel like your body is not represented in fitness and you've been doing the be.come project and you have a story, send me a picture of yourself and tell me your story.'" It resulted in 15 real clients participating in a photoshoot that, as you can see above, beautifully represents the range of body sizes and shapes that are not often shown in campaign imagery.

Once the day's panels concluded and I was changed into my sports bra and leggings I settled onto my mat, barefoot, alongside 20 or so classmates who were all ready to give the be.come project a go. I have a background in dance and do yoga several times a week so I was excited to experience a little familiarity. The class began with Meyers walking into the room in a cobalt blue matching set and a headpiece wrapped around their ears. They pumped up the jams and started us all off with a series of movements that we repeated a few times before moving on to the next set. The first thing I noticed was that, because it was to the beat of the music, I was forced to not only control my movements more tightly but I couldn't cheat on form and alignment (it hurts to lunge with control if your knee is in the wrong spot, ya know?).

Meyers describes the movements best: "It’s the alignment of pilates combined with the lengthening of yoga with sequencing on the beat." The class is not easy. I found myself sweating very early on and after the third or fourth repetition of each series I was mentally begging to move on to the next. Thankfully, Meyers' approach to instruction is not about pushing yourself to the point of injury. "The main goal with fitness is that we make it less about the toning up, go lower, push harder, hold longer, sweat, make it burn, and more like 'what would it feel like if you did this? Do you need to go deeper or do you need to pull back? Are you feeling it in your oblique or are you feeling it in your neck?' Language is important to me." Meyers shared that now instead of calling something a 'modification' it is an 'alternative.' This takes away the negative associations of listening to your body.

After 50 minutes of planks, crunches, bends, twists, kneels, balances, and everything in between the class was over. I smelled. Everybody smelled. I felt amazing. Meyers concluded with one quick note that "any movement is better than no movement at all" and we were all instructed to turn our heads to the right (or left) and kiss our shoulder. All of the classes end this way.

the be.come project turned out to be more challenging than I expected from a fitness perspective. I'd recommend it to anyone looking to add a quick, convenient routine to each day of the week. If you're the kind of person who craves fast-paced, intense cardio you'll still enjoy this but also want to supplement it with your weekly cycling class, weekend runs, or however else you like to sweat.

The entire experience was a practice of self love and self awareness. I felt un-judged and connected to the community and, the next day, I was ready to download the app and do it all over again — and for the right reasons.