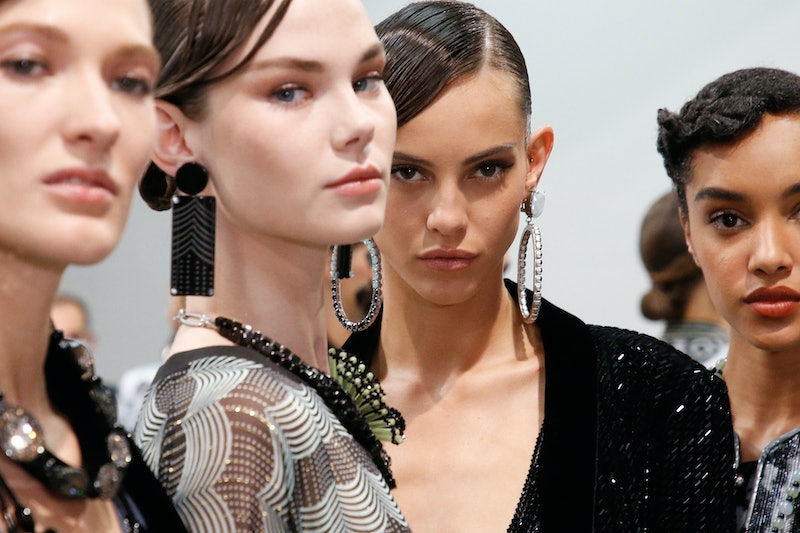 It's key makeup artist Linda Cantello that we have to thank for the eye-catching makeup moments spotted at Giorgio Armani's Spring/Summer 2021 showcase on Sept. 26. The beauty extraordinaire created a no-makeup makeup look that appeared completely different on-camera than it did off. However, much to our surprise, creating the look wasn't the easiest task, even for a makeup extraordinaire like Cantello. Ahead, check out the masterful look that commanded the Giorgio Armani runway, that you can try whenever you want to appear to have flawless skin.

"I think Mr. Armani was incredibly smart to stream the show," Cantello tells TZR. And while the presentation was able to reach a larger audience, according to Cantello, creating an on-screen makeup look brought a new set of challenges. "Mr. Armani wanted an extremely natural look," she says. "But when it comes to on-screen, wearing no makeup at all isn't an option." Therefore, Cantello was tasked with more than just making the makeup appealing to the naked eye. "It had to be long-lasting because we obviously couldn't keep running in and retouching it, and it also had to look as natural as possible without looking mask-like because of the camera lights."

Cantello said she herself learned a thing or two from the experience. "I'm not a television makeup artist," she says. "Yet I am extremely critical of my work. Obviously, on-screen, they want the models to look warmer so mastering skin tone is very important. The issue, however, is that heavy makeup doesn't translate well in my opinion so I had to find a balance."

And Cantello did just that, first focusing on creating a smooth yet lightweight complexion. "The Neo-Nude Powder was the most important for the skin because it sets everything in place," she says. "Basically, it created this film over the Power Fabrics Foundation, which we based all of the models with. The result was a very luminous finish that wasn't too shiny. It looks incredibly natural and is really long-lasting. That powder saved our lives."

And while we're used to more dramatic eye looks from Cantello, who has been deemed the creator of the smokey eye, bold eyes took a backseat for this show. "On the eyes, we just went with a soft matte kind of shade that was created with a product that's not actually out yet," she says. "Then we applied the Eyes To Kill shadow in the shade Stellar. It added a light silver flush and also sets the lid in place. The eyes had a light luminosity." However, Cantello says nothing was applied under the eyes. "We didn't put any shadows under the eye because we wanted the model's eyes to appear very, very open."

The lips followed the same theme. Remaining understated yet powerful enough to translate under the cameras and lights. "We used the Lip Maestro then added a thin film on the bottom layer of Ecstasy Lacquer," Cantello says. "We didn't want anyone to appear unrecognizable, we just wanted to amplify the natural faces of the models, and I think we did that well."

And the men weren't forgotten. Neo-Nude Foundation was used on their complexions as well, topped with powder, while brows were filled in using the Eye and Brow Maestro.