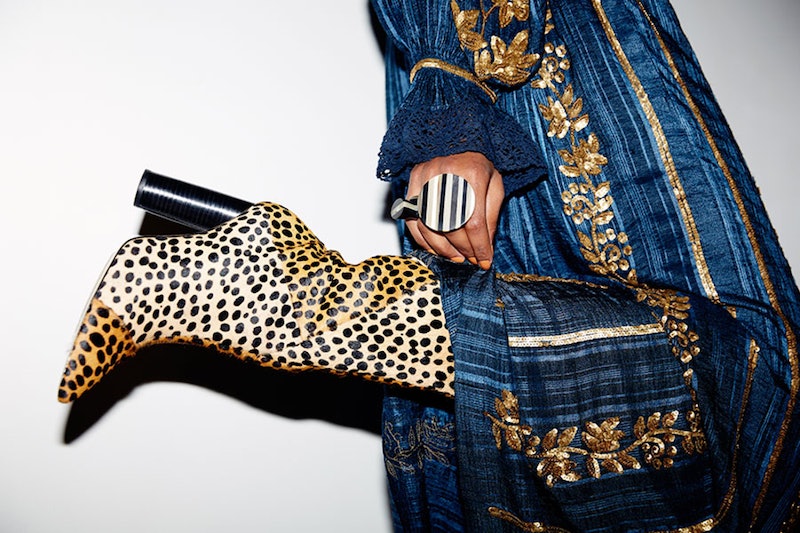 Sorry, sandals — it's never too early to think about which boots you're going to buy next. And, since Moda Operandi released its first-ever Runway Report on May 1, you have every excuse to look towards autumn. The new report analyzed Fall 2019 runway shows via Moda Operandi's Trunkshow platform, as well as shopping patterns the brand has spotted. So, basically, it's your insight into which shoes everyone is going to be wearing in six months. And lucky for you, the Moda Operandi Runway Report has predicted not one gigantic fall 2019 boot trend, but two: Utilitarian styles like moto and combat are going to be huge, and knee-high (or over) boots will continue to dominate the scene.

Knee-high boots? For fall? Groundbreaking, you may be thinking. But these aren't the same boots you've seen — and have worn — seasons before. And Moda Operandi isn't the only one to predict the trend. On April 29, Dior's 2020 cruise collection made a case for the future of boots, literally; the fashion house used tall boots repeatedly throughout the cruise collection, interspersing the design with more traditionally resort-esque flats and gladiator sandals — and carving out a reality where boots are paired with any sort of outfit, for any type of weather. (So yes, even if you live somewhere where autumn means balmy, 70 degree weather — you still can pull out sky-high boots.)

And gone are the days of saving your bold, thigh-skimming boots for the weekend, or certain silhouettes; in Dior's world, you wear them with prim white dresses or sleek menswear. For off-the-runway inspiration, think of the high boot styles celebrities like Emily Ratajkowski and the Kardashians have popularized. The Moda Operandi Runway Report also nodded to one of the celebrity crowd's favorite shoe brands — Paris Texas — as well as the reliably chic boots of Ulla Johnson and Gabriela Hearst.

However, 2019's combat boot trend is just as chic (if not a little shorter). Moda Operandi pointed to the moody, utilitarian boots crafted by major players like Prada, Miu Miu, and The Row. And while you may need to have a certain sartorial panache to pull off the gothic and architectural pieces featured by Prada and Miu Miu, The Row's style is easy to obtain; and, like Dior's collection, breaks the traditional combat boot style rules.

As in: You don't need to save your chunky, lug-soled boots for a rainy day, or pair them exclusively with ripped jeans and a T-shirt. The Row showcased dark, thick boots with the airiest of turtleneck-cowl neck hybrid pieces, and professional, office-ready staples. If you thought you couldn't wear combat boots with a blazer (to work, not the punk show), The Row is asking you to think again.

Ready to put your best foot forward this fall? Ahead, a handful of styles you can buy now that are going to be everywhere this autumn.