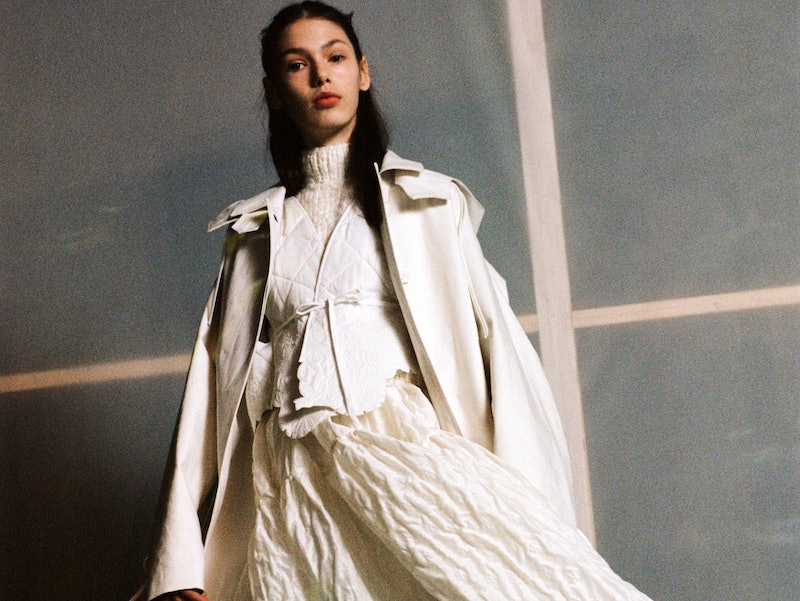 “I’m Danish and I’ve lived in London, so I know all about rainy days," said Cecilie Bahnsen, megawatt designer behind her namesake womenswear label, in an official release. For her Fall/Winter 2020 show (which was one of her last in Copenhagen, before graduating to Paris Fashion Week), the designer revealed a compelling cavalcade of outerwear — some of which might have looked familiar. Using coats from British luxury brand Mackintosh (known as 'Mac') as her canvas, Bahnsen had a clear objective: "I wanted to take the traditional men’s Mackintosh silhouette, with its utility and the masculine tailoring, and bring it into my universe,” she said. The resultant Cecilie Bahnsen x Mackintosh collaboration does just that, offering a refined, romantic spin on the hallmark menswear coats.

"We felt her beautiful feminine esoteric style was the perfect antidote to the more masculine regimental silhouette of our traditional garments," says Austoni. From there, Bahnsen's design team worked conjointly with Mackintosh experts in their Scotland factory. The result? A trove of billowing, sculptural coats that do more than simply protect beautiful dresses from the elements. Bahnsen's Mackintosh styles serve as a key ornament to any ensemble, cloaking its wearer in a bold, all-knowing femininity.

A trademark of all Cecilie Bahnsen designs, the two coats display a discernible play with volume and dimension. The first, the classic Mac silhouette, features an overblown hood and an appended vest, with bonded cotton invoking Mac's iconic rubberized hand-feel. The second is a slightly more extraverted option, calling on Cecilie's signature matelassé (a stitching technique that creates a padded quilt-effect) for a free-floating fit. Both renditions deviate from the sandy hue that Mac coats are famed for; instead, going with gloomy midnight blues and bright whites. What's also shared: both coats feature imperfectly scalloped edges, which look as though they'd been hand-dipped in embroidered florals.

With Mackintosh's 200 years of architecting coats and Bahnsen's prophetic eye for women's style, the collaboration wields the rare opportunity to score a tried-and-true forever coat that's fashionable, too. Browse ahead: