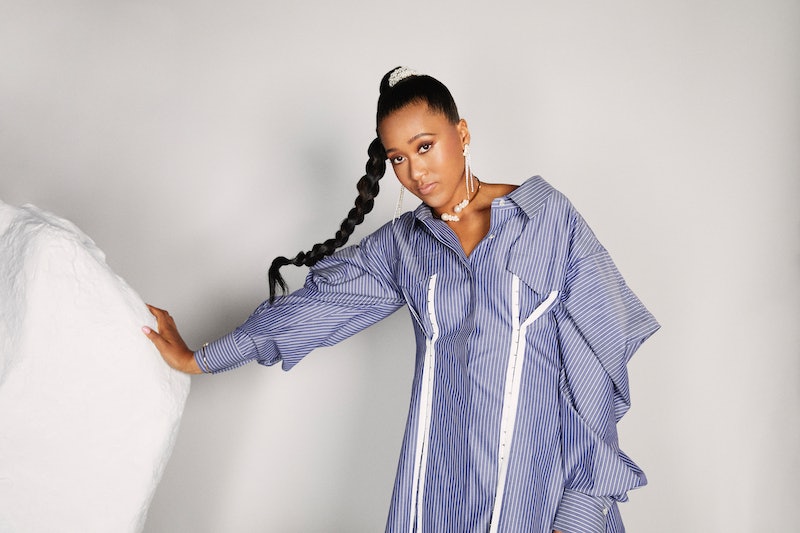 On Sep. 16, the capsule launched with a striking campaign featuring Osaka herself, who was wrapped in a poplin shirt dress. Influenced by elements of Harajuku girl dressing — fit-flare dresses, truncated hemlines, dramatic cuts and folds — each piece wields an empowered, feminine flair that's true to Osaka's personal style. There is, of course, a touch of sporty chic throughout each garment — with "ADEAM"-emblazoned collars on crewneck tops, athleisure-readied headbands, and knit cardigans.

Tucked between the bold statement pieces, there are a few versatile, multi-wear styles as well. Take, for example, ADEAM's 'Tokyo' shorts, which feature a gentle pin tucks and slash pockets that pair seamlessly with knits and button-downs alike. Or, the 'Osaka' knit tops, whose navy and mauve color-ways can be played up or dressed down. Overall, the entire capsule is meant to be mixed and matched together, creating a dramatic look that's apropos to Harajuku fashion.

"My heart is racing so much," said Osaka, who shared the news of the launch through an Instagram post this morning. "This is something that I’ve been really excited to share and it’s a really incredible process from start to finish ... I’m so happy it’s here and I get to share it with everyone." Before the collaboration started, Osaka was the first to reach out — touching base with ADEAM's designer, Hanako Maeda, about a potential collaboration. Upon meeting, it became clear that the two were kindred spirits, connecting instantly over a shared vision. Several exchanged sketches later, the capsule was born — with clear nods to "kawaii" (Japanese for "cute") fashion throughout. The long-standing cultural trend in Japan has lent itself to clothing for decades, and this capsule offers a sporty, slightly-matured twist on the aesthetic.

"I cannot thank Naomi enough for giving us this wonderful opportunity, and it was such a joy designing together," said Maeda in a likened Instagram post. "We put our heart and soul into this collection, so I hope everyone enjoys the pieces."

To shop the full collection, continue ahead — and be sure to keep eyes on Osaka's Instagram for styling ideas.