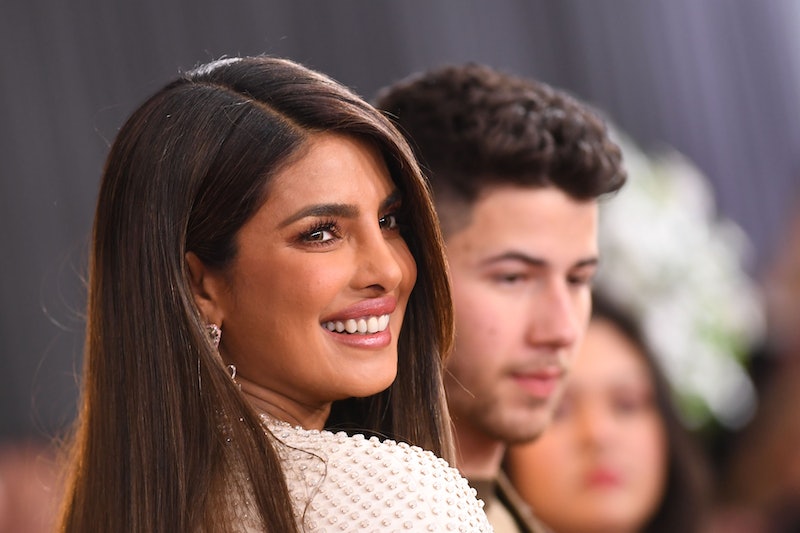 There are some details that you can almost guarantee will make an appearance during award show season (like, appliqués, beads, and embellishments). But, surprisingly enough, the 62nd Annual Grammy Awards red carpet was filled with a trend typically found in more casual environments — fringe. Presented in many different forms, each better than the next, the free-flowing detail is set to be another one of 2020's major trends to have on your radar.

On Jan. 26, some of the biggest names in Hollywood, with their significant others and dates in tow arrived to the STAPLES Center in Los Angeles to celebrate the accomplishments of the music industry. And, in the spirit of staying true to the Grammys' jovial spirit, those in attendance took a fanciful trend that was all over the Spring/Summer 2020 runway to the red carpet. Priyanka Chopra showed up on the arm of husband, and Grammy nominee, Nick Jonas sporting a daring gown by Ralph & Russo with fringed kimono sleeves. Also embracing the fun detailing was Billy Porter, who sported a Baja East look, reminiscent of Cher in the '80s, complete with crystalized trimmings. Though both looks offered very different takes on the trend, it was clear that the Western-inspired detail was taking over the night.

Continue on to see a list of celebs that showed up to the Grammys wearing what's bound to be 2020's most unexpected red-carpet look yet.

Reminiscent of Cher in the '80s, Billy Porter shut down the red carpet in a sparkling blue pantsuit from Baja East (complete with crystal fringe).

The Grammy award winner (who took home the award for Best Latin Rock, Urban Or Alternative Album) wowed in a red leather fringed wrap dress that was totally unexpected.

The Guamanian artist channeled her inner flapper in a 1920s-inspired silver mini dress, which she accessorized with matching clutch and strappy sandals.