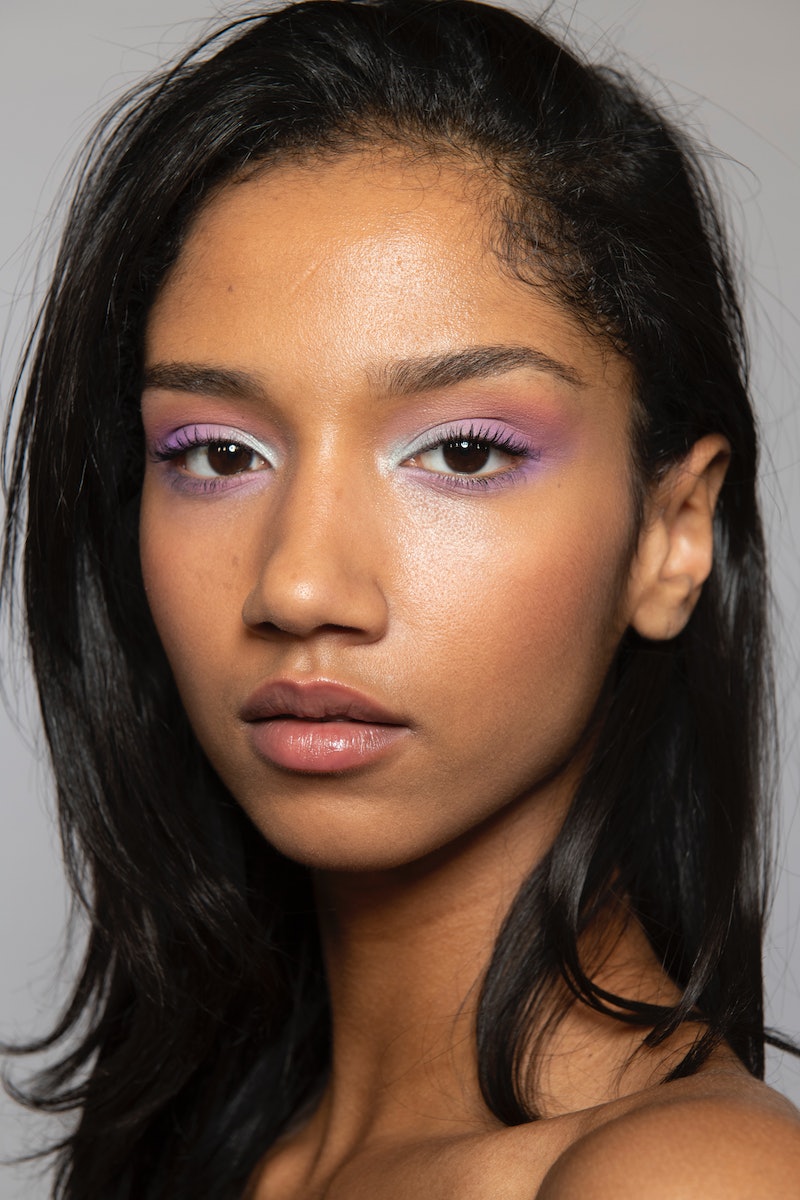 One of the things that makes Paris Fashion Week, and the beauty trends that come out of it, such a feast for the eyes is how much the French keep aspects of their signature looks. They've mastered the art of the "if it ain't broke, don't fix it" sensibility, churning out trends season after season that still consistently fit into the traditional Parisian "look." It's why people are obsessed with French girl beauty in all its air-dried, au naturel glory. It's effortless while still looking stunning — which is pretty much the goal, right?

That said, during the Spring/Summer 2020 shows in Paris this year, hairstylists added some new twists to typical French-girl hairstyles. Effortless waves made room for natural curls. Deep side parts gave a devil-may-care attitude, while sleek blowouts with center parts were slightly more polished than you'd expect to see on a gal strolling around the fruit stands of France. There were also slicked-back looks and interesting braids, two styles that seem more New York than Paris. But here they were, and they fit beautifully.

Luckily, you don't have to wait until spring to test drive these trends. Ahead, find the five biggest looks from Paris' most stylish week. You might start redefining what it means to be French chic.

Get the look: Sure, effortless waves are as Parisian as a fresh baguette or a cherry red lip — but that doesn't mean you don't love to see it season after season. And shows like Isabel Marant, Celine, and Saint Laurent delivered these mussy 'dos in gorgeous fashion. But Chanel upped the ante, sending women down the runway sporting their natural styles. (Which, unfortunately, is still a rarity in Paris in 2019.)

Backstage at Chanel, hairstylist Sam McKnight held court over what Fashionista described as one of the most diverse castings the label had ever put on. "[It's] Chanel luxe — we're inspired by the ladies in the '60s and '70s who had heavy, gorgeous hair like curtains that just fell down," he said on his Instagram stories. There wasn't much product used — it is French-girl hair after all. But McKnight added a few spritzes of dry shampoo to certain girls to give the looks texture.

Get the look: Instead of the side-swept or milkmaid braids we typically see coming down the runways of Paris, this season's styles were much more intricate and dynamic. At Lanvin, stylists worked natural manes into cornrows with interesting designs, offering up a varied take on protective hairstyles.

For Alexander McQueen, lead hairstylist Guido Palau conjured up Victorian pirates. "McQueen looks always have a touch of romance — always beautiful, always with a touch of British sensibility. I was inspired by pirates and the high seas, with a small braid in the front inspired by Adam and the Ants, who often wore a similar look," said Palau. Plaits with golden ribbon were wrapped around themselves and secured to models' scalps, giving a whole new meaning to the idea of "rope braid."

Get the look: Variations of sleek and slicked styles were the looks du jour at Lanvin, Chloé, and Rick Owens, giving life to gals who can't even be bothered to dry their hair after showering.

For Lanvin's look, hairstylist Duffy dried the hair before working in Kiehl's Silk Groom Serum, Allure reports. He flat-ironed the ends, and then worked in a matte wax to give the looks even more texture. Looking for a wearable take on the wet hair trend? You just found it.

Get the look: Side parts are always chic, but the side parts at Paris Fashion Week were extreme. Backstage at Loewe, Palau opted for a sleek ponytail with a deep side part. The key to keeping things in place? Many mists of Redken's Triple Pure 32 Hairspray.

Things were a little more loose at Balmain, where McKnight kept the hair down and completely off to one side. To achieve the deep part, he finger-dried the strands, lifting them up and away from the face, according to PopSugar.

Get the look: At Balenciaga, Givenchy, and Y/Project, hair was sleek (with lightness) and split down the middle, which made it look more Upper East Side than Le Marais.

At Valentino, Palau utilized a heat protectant before blowdrying hair to truly bring out the sine. "The hair this season at Valentino is super rich, super glamorous, and super dream-like, which perfectly complements the Valentino girl, who is uptown, fancy, and feminine," he explained.