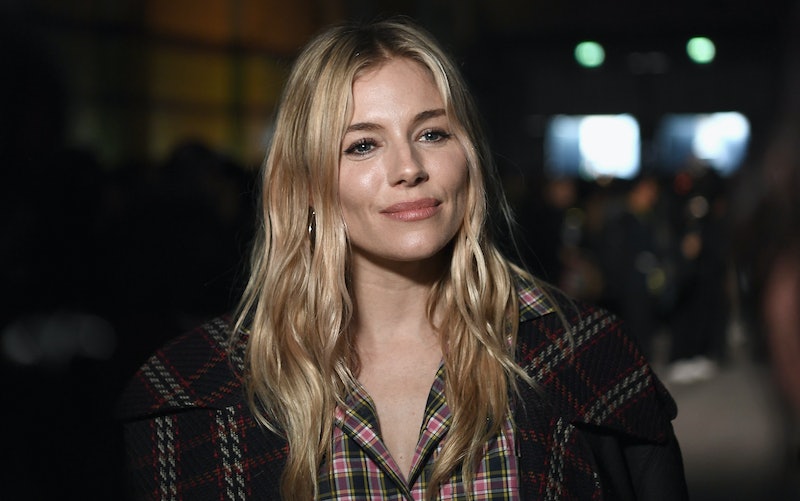 June Gloom has kept Southern Californians guessing with gray overcast, while scattered thunderstorms and humidity in New York City have barely spared city-slickers, either. Despite unpredictable forecasts and spotty skies plaguing both coasts amidst summer's long-awaited arrival, one thing remains crystal clear on the style front: The undeniable staying power of prairie dresses and vibrant suits. Sienna Miller and Naomi Watts have been on-the-go promoting their forthcoming Showtime series, The Loudest Voice, and the stylish pair were all smiles outside of the Build Studio in Greenwich Village on Mon. afternoon. Clasping hands and flashing their pearly whites for the camera, the blond duo appeared polished but effortless in the corresponding looks.

Watts, 50, opted for a shiny puff-sleeved prairie dress with silver buttons and ruffle detailing, accenting the breezy frock with a pale pink handbag and sunglasses. Delivering vibrancy via an emerald green wave of color, Miller, 37, opted for a wide-leg pantsuit, black sunglasses, and gold statement earrings. Though the ensembles served totally different vibes on the sunny afternoon, both looks laid the groundwork for a no-fail outfit to try this summer. Juxtaposing each other perfectly, each actor opted for mid-height white heels to complete the look.

The best part about this dynamic mashup is the notable contrast between the two outfits. While Watts served polished sophistication via a structured blazer, Miller charmed with the help of flouncy detailing and romantic, voluminous shapes. It was the best of both worlds, and each end of this sartorial spectrum deserves a spot in your summer lineup. Ahead, copy one or both of the winning looks by shopping The Zoe Report's selection of similar styles both actors would surely approve of.

Hop on this satin-trimmed blazer while it's 40% off — and pair with white sneakers and a straw bag to summer it up.

Throw on your favorite bucket bag and slides and hurry off to the nearest prairie — or park — there is.

Pair this forest green blazer dress with strappy stilettos for a chic but sophisticated date night.

Between the puff sleeves and crystal buttons, this mini dress is the definition of summertime fine.

Throw on a white ribbed tank and chunky sneakers for a cool but moveable on-the-go look.

Go for a billowy moment with the help of this airy number from Azeeza.