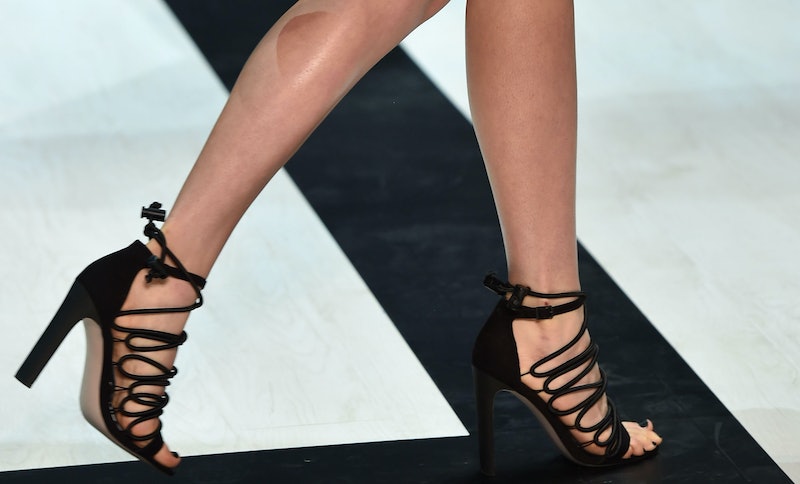 It seems like all heated debates are birthed on Twitter, but the latest lively discussion is one that the medical community can't help but get in on, too. It all began on May 9, 2019, when tweeter Conor Arpwel posted a question with a poll: "Do you wash your legs when you take a shower?"

The question was innocent and simplistic enough in nature, but wound up launching an ongoing discussion that had people all over the world at odds. Though the poll is closed, 852,782 votes were counted, and 80 percent of voters declared themselves leg-washers, while the remaining 20 percent claimed they were not. (Taylor Swift, who chimed in on the debate during a recent Ellen DeGeneres Show appearance, seems to be split: "When you shave your legs, the shaving cream is like soap, right?" she reasoned.)

According to a 2014 study from Euromonitor, Americans average about seven showers each per week — more than China, Japan, and the United Kingdom, and less than places like Australia. And though a fair share of digging has been done, there aren't any hard statistics on the number of minutes people take to wash their legs. According to doctors, however, it is ideally something you should be doing somewhat regularly, in some capacity. “Generally speaking, you should always wash your legs if you see visible soiling of the skin,” Dr. Joshua Zeichner, the Director of Cosmetic and Clinical Research in Dermatology at the Mount Sinai Hospital in New York City, tells The Zoe Report. If not, then washing them every day may not be necessary.

In fact, there's actually such a notion as too much scrubbing: "Using the wrong soap may cause more harm than good, leading to irritation and inflammation of the skin,” Zeichner confirms. Excessive washing can actually lead to irritation, along with exposing your skin to the bacteria that you're trying to fight. "You can’t run from bacteria — they live everywhere," Dr. Lamees Hamdan, founder and CEO of Shiffa Beauty, adds. "What you don't want is an overgrowth of the 'bad' bacteria or fungi that can lead to certain skin conditions. Excessive cleansing and using soap doesn’t actually protect you from the growth of these strains, it can actually lead to it." When your skin is overwashed, it becomes super dry and flaky, according to Dr. Zeichner. He doesn't recommend washing the skin more than twice per day, he says. "While it is important to stay clean and remove any visible soiling of the skin, it’s not actually necessary to wash every day. The only exceptions are the face, under arms, and personal areas."

To be clear: Showering is necessary for removing said bacteria that lives on the body. And, yes, that includes your legs. "The Human Microbiome Project published bacteria maps that tell which species of bacteria reside in each skin region," Dr. Estee Williams, a New York City dermatologist, says. "The bacterial population on the legs is different than the feet since feet are moist and sweaty." That doesn't necessarily mean that there's more (or less) bacteria on the legs than the feet, or vice versa: "There are different populations in different parts of the body," Dr. Zeichner clarifies. "Sweaty areas may promote high levels of certain bugs that will not grow as well in drier areas of the body. In some cases, if there is overgrowth of bacteria or fungus on the skin and the barrier is disrupted, it could lead to a skin infection, like impetigo or Athlete's Foot."

The moral of the story here, is washing the body is usually a good thing, just don't overdo it. And if you're in the minority that just prefers to let the water run over your gams, that works, too... technically. "Sweat is salt and water, and washes off just fine with only water. If you applied sunscreen or need to wash your legs because they are dirty, then just use a gentle soap cleanser. [Editor's note: The derms were split on the kinds of soap — Dr. Hamdan prefers castile, while Dr. Zeichner likes pH balanced formulas.] Otherwise, water is just fine," Dr. Hamdan says.

Dr. Hamdan recommends using a castile (meaning vegetable-based) wash, which is all natural and completely gentle on the skin.

According to Dr. Zeichner, this cleanser combines gentle cleansing ingredients with soothing and anti-inflammatory botanicals, making it appropriate for even extra sensitive or dry skin.

"This mousse delivers the same gentle cleansing technology as Dove's body washes along with a hydrating lipid complex, but in a unique mousse texture that is ideal for the legs because it doubles up as a shaving cream," Dr. Zeichner says.

Washing your entire body (including your legs!) will be so enjoyable with this gel-like formula.