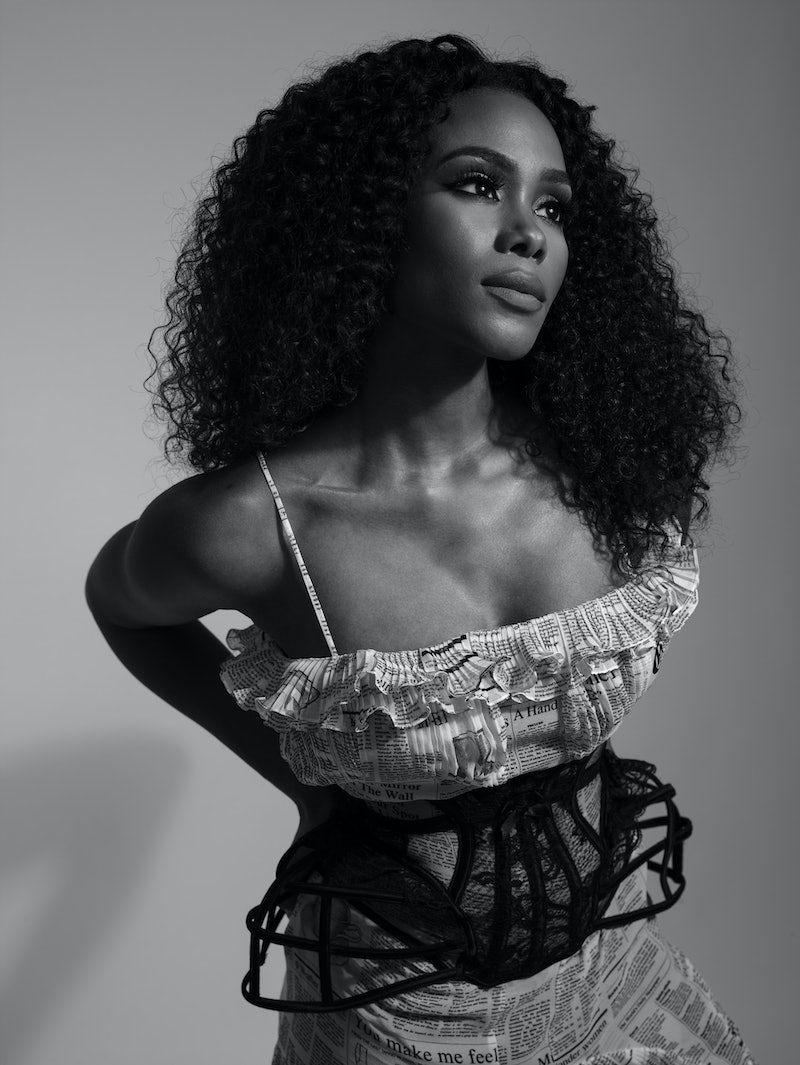 Down in the valley of Chucalissa, Mississippi, the lines around The Pynk — that is, the fictional strip club centralized in Starz's hit drama P-Valley — always wrap around the building to see Miss Mississippi grace the stage (and, um, the pole). In reality, the woman who plays Miss Mississippi — actor Shannon Thornton — is actually from Connecticut. She prefers comfy sweats instead of floss bikinis, speaks softly instead of in a high-octave Southern twang, and prefers a bare face over the full-beat she wears on screen.

However, Thornton's on-screen appearance represents more than just looks that will translate well on camera. Her character, a victim of domestic abuse at the hands of her boyfriend, is also covering the evidence of his beatings. "Makeup is a form of protection for her," Thornton tells me over the phone. "She's protecting her abuser and she's also protecting herself from being judged and from having to come to terms with what's happening to her. It's something common with abuse survivors, they're scared of the judgment they may face."

And while in real life, Thornton probably wouldn't opt for heavy eyeshadow and dramatic contours, instead preferring a product stash marked by minimalism, that doesn't make her any less of a beauty lover. Just earlier this month, social media was abuzz with the discovery that Thornton used to model on the boxes of popular hair brands, something she says is yet another reflection of her long-standing relationship with beauty.

Ahead, check out Thornton's three-product skincare routine, what she's learned about stripper body care, the oh-so-relatable reason she recently chopped her hair off, and the powerful message behind why she refuses to contour her nose.

Shannon Thornton On Her Minimalistic Approach To Skincare

"I am a big fan of taking care of my skin," Thornton says. "If the skin itself is not healthy or not being taken care of through diet, or proper care, products don' matter." That said, Thornton says she's a huge fan of detoxifying, especially when working on set. "That's when I go to a professional," she says. "When we were filming P-Valley, we were on set for 12 to 15 hours a day dancing so there was a lot of sweat. Additionally, in-between takes, they were adding more makeup on top of what we already had. So my skin was really taking a beating." She created a professional-grade regimen during that time which she says was a huge help. "I would get purifying facials once a month and would regularly see a dermatologist. It's the only way my skin stayed in-tact."

But when she's not on set, Thornton is typically bare-faced and only uses a few products to keep her skin clear and hydrated. "During times like these, I use Vanicream and cocoa butter," she says. "I like to keep it simple, inexpensive, and easy to find." However, a splurge she always has on hand is a TZR staff favorite: "I'm absolutely in love with Dior's Lip Glow Color Reviving Bomb," she says.

Shannon Thornton On Her P-Valley Makeup

Although the plot of P-Valley, which was renewed for a second season in July 2020, was often unpredictable, we could always count on the extravagant makeup looks. According to Thornton, that was the point. "At the beginning of production, we had a conversation about Miss Mississippi and the aesthetic we were aiming for," she says. "After some thought we decided we wanted her to look like a Barbie doll." It's a task that Parra Thomas, key makeup artist for both Thornton's character and beloved character Uncle Clifford did seamlessly. "She's just really masterful at what she does," Thornton says of Thomas. "We had so much fun with eyeshadow specifically. My favorite look was from episode five, it was a glitter blue eyeshadow with a bold shimmer liner."

"Miss Mississippi loves Fenty Beauty's Body Lava," she says. "We use it a lot on the show. When I'm performing on stage, you see a shimmery glow to my skin." On average, Thornton says, she anticipates that she went through three bottles over the duration of the filming of season one. And for anyone who's never used Body Lava, you know how hard it is to get through just one bottle.

However, when it was time for pole work, the Body Lava was nowhere to be found. "When you're using things like Body Lava, baby oil, or other things that make the skin slippery on a pole, you will slide right off," Thornton says. She learned from her body double on set that instead, strippers rely on a tackier product for traction. "Dancers avoid anything that could cause them any slippage on the pole," she says. Instead, they use something called Dry Hands. "It's a product that actually makes the skin and hands more tacky, which allows you to grip the pole easier without risking slipping."

"I have so much fun changing up my looks with hair," she says. "It's been that way since I was a kid. I've always been big on just making sure my hair was taken care of and making an effort to have fun with different lengths and styles." And speaking of lengths, the star recently cut off her hair in quarantine. "It was because of boredom," she says of the decision. "I get bored easily when it comes to my hair and I wanted something a little different. Short was the way to go." However, it's her half-up, half-down look that she's most known for, a look that's created with a wand curler. "I like to alternate between that style and the side part look," she says. "Those are my two go-tos."

Shannon Thornton On Why She Doesn't Contour Her Nose

While many don't contour their nose because they simply don't like the way it looks, Thornton's reasoning goes much deeper. "I have always thought that contouring my nose, especially as a Black woman, meant that I felt something was wrong with it," she says. "I never was keen on the idea of contouring because I don't think there's anything wrong with my nose. However, when I just want to jazz it up I like enhancing the bridge of my nose by adding highlighter or shimmer to it, just to make it pop a little bit. But I stay away from things that can alter the shape of it."