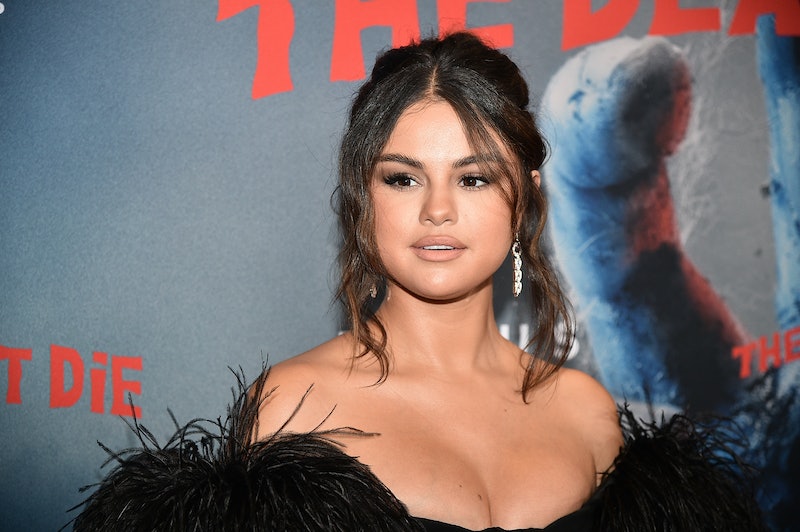 A little over a week ago, cryptic images started popping up on Selena Gomez's Instagram feed that had fans wondering what the singer had in the works. As it turned out, the 27-year-old was gearing fans up for a new song release, captioning each new post (many of which were throwback photos from her childhood years) with a line from the song. Fast forward to Oct. 23, and Gomez's new "Lose You To Love Me" music video dropped, garnering millions of views in mere hours — which should really come as no surprise, considering the fact that this is her first solo single of 2019.

The emotional song is definitely in line to be one of 2019's most popular breakup ballad — phrases like "You promised the world" and "I had to lose you to love me" likely strike a chord with plenty of people around the world, with comments like "I understand this all too well" flooding the comments section. Other noteworthy things about the music video? According to Gomez's hashtag, it was shoot entirely on an iPhone — how's that for low-key video production?

Gomez's outfit in her new "Lose You To Love Me" music video deserves just as much mention, too. Why? Because it hits on several of fall 2019's most sought-after fashion pieces, namely, the ever-popular cardigan and the sleek '90s-inspired slip dress. Add in the fact that the former is actually quite reasonably priced, and you'll wonder why you haven't scooped up the Gomez-approved cardi sooner.

Here's the rundown: The fuzzy knit that's casually slung over her shoulders hails from none other than Free People's exclusive in-house label, FP One — and it won't cost you more than $128.

As if its price tag isn't already reason enough to scoop it up — plus, the fact that it's perhaps the most trendy fall staple — its ultra-snug material is sure to win you over. Per the product description, this is one "super soft and oh-so cozy cardi" that shoppers can't stop raving about in the reviews. One customer even went so far as to say it makes her feel like a snow bunny.

Underneath the cardigan, Gomez wore a slip dress from Olivia von Halle, marking the second time she's worn the brand for a music video. The first time she sported the label's elevated nightwear was for the "I Can't Get Enough" video.

So, before you listen to Gomez's newly-debuted single yet again, consider scooping up the exact cardigan she wore for its music video. Shop the singer's exact Free People topper, plus other cozy styles, below.