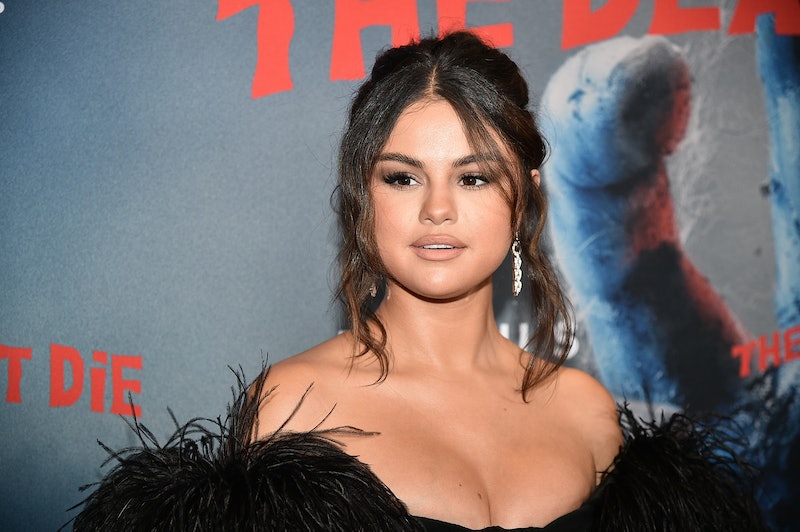 The red carpet at Mon. night's The Dead Don't Die New York premiere was abundant with 2019's top texture: feathers. Chloe Sevigny and Selena Gomez both wore feather-adorned dresses, each incorporating the trend in her own unique way. Rest assured these whimsical looks will make you want to stock your closet with plenty of plumed frocks just in time for summer.

That $16,000 Celine dress Gomez wore to the premiere of her new zombie fantasy film was without a doubt the highlight of the night. The pleated A-line mini featured an off-the-shoulder silhouette and a fresh take on what's quickly becoming summer's biggest craze.

The actor's shoulders were decorated with wispy feathers resembling puffy sleeves. Coincidentally, her costar Chloë Sevigny and singer Justine Skye showed up in feathery outfits, too.

Sevigny's dress was also an off-the-shoulder number with puffy sleeves, albeit designed much differently than Gomez's. Her mini, from the Fall 2019 Marc Jacobs collection, was white with black floral print, an exaggerated train, a big bow in the center, and symmetric bursts of black feathers on the neckline. To put it simply, the dress deserves a permanent residency at the Museum of Modern Art where Sevigny debuted it.

Then there was Skye, a singer in attendance at the star-studded event. Likewise, she opted for a white off-the-shoulder minidress with — you guessed it — voluminous feather trim.

These three made a strong case for feathers with their charismatic, ornamental ensembles. Unfortunately, fellow The Dead Don't Die actor Vanessa Hudgens didn't join in on the fun (she did sport an elegant lace gown instead, though).

Miu Miu, Rachel Comey, and Marc Jacobs called the new craze on their Summer 2019 runways. Then, there was Diana Ross' over-the-top birthday party in March where Tracee Ellis Ross, the Kardashian-Jenner clan, Heidi Klum, and more solidified it once and for all: feathers are in.

Shop feather-adorned dresses for your future summer parties, ahead.

This off-the-shoulder silhouette was all the rage at Mon.'s premiere, so you know it's going to be a hit at this summer's office party.

Keep it simple in this average LBD with subtle feather trim around the sleeves, the chicest upgrade.