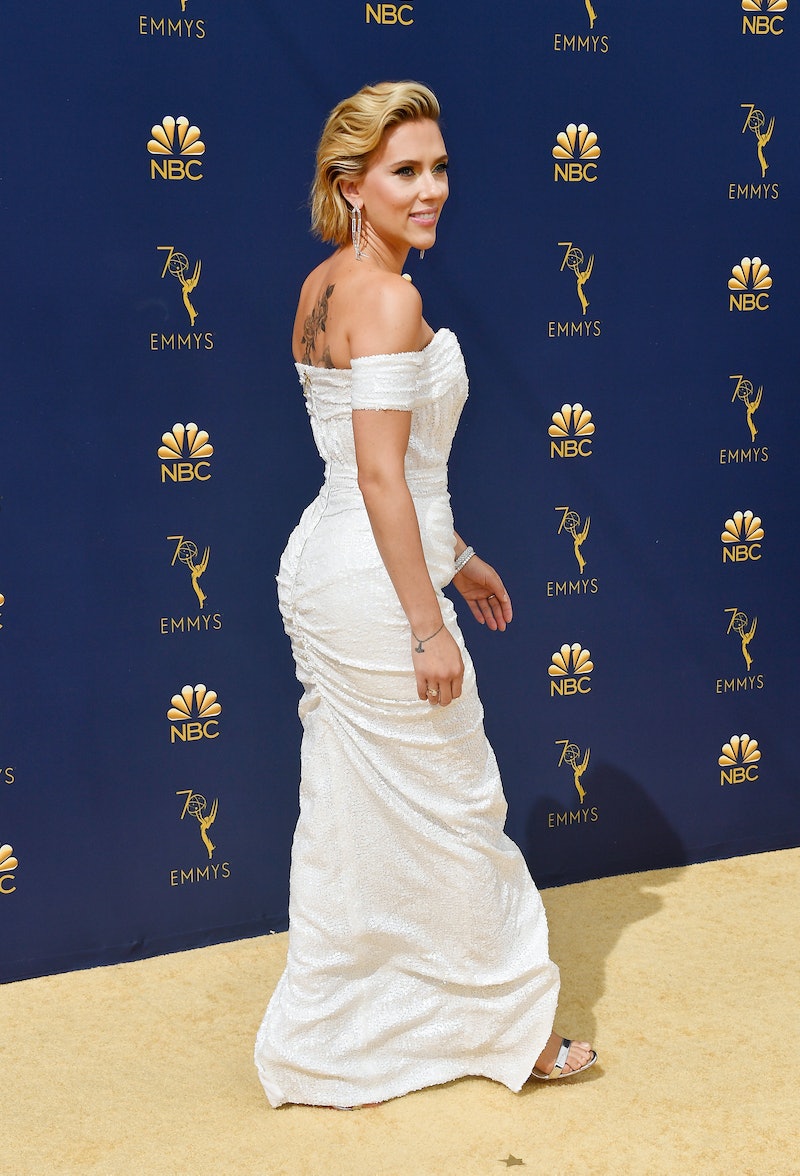 Considering award shows are breeding grounds for celebrity hair chameleons, it should come as little surprise that Sept. 17's red carpet kicked off with a major transformation. That said, Scarlett Johansson’s blonde hair at the 2018 Emmys came as a shock — especially since the actor has worn a rich, ashy brown hue in recent months.

Johansson arrived at the Microsoft Theater in Los Angeles on Monday, Sept. 17 in one of the riskiest beauty looks of the evening. The actor — whose boyfriend Colin Jost of Saturday Night Live will be hosting the event — opted for an unusual look: vibrant-yellow eyeliner, exaggerated cat-eye liner, and dewy skin. Johansson topped off the look with a baby-pink lip, which gave way to her standout eye makeup.

But the real highlight of Johansson's ensemble was her hair. Just like the new shade Kristen Stewart debuted on Sept. 15, Johansson's yellow-blonde hair was left with bold, exposed roots for a grungy, '90s-inspired hue. The actor opted for a deep side part, which was slicked and waved for the ultimate wet-hair look. The color comes as a stark contrast to the chocolate-brown shade we've seen Johansson wear this season.

The last time Johansson walked a red carpet was in early May at the 2018 Met Gala in New York City. The actor — who showed up to the The Metropolitan Museum of Art wearing a purple Marchesa gown with Jost —sported a layered, brown pixie with subtle highlights throughout her roots.

That's not to say that the 2018 Emmys marked Johansson's first run with blonde hair. The 33-year-old was photographed at the American Museum Of Natural History's 2017 Museum Gala with an understated, sandy-blonde shade. Johansson paired the hue with natural-looking makeup: soft, barely there foundation, petal-pink lips, and a few sweeps of highlighter in the corner of her eyelids and across her cheekbones.

Johansson isn't the first celebrity to go blonde in Sept. Although cold-weather season is usually when we see a spike in darker hair colors amongst the celebrity set, Kristen Stewart arrived to the premiere of her new film, Jeremiah Terminator LeRoy on Sat. wearing an icy blonde shade. Stewart — who attended the Toronto Film Festival with her co-stars Laura Dern and Jim Sturgess — traded out her light-brown hair for the new shade.

There's a good chance platinum and blonde hues will continue to pop up throughout the season — maybe even on your head. As the new season approaches, make like Johansson and opt for a unique new shade that's bound to pair well with your inevitable lineup of black turtlenecks, coats, and boots.

Although platinum and bleached shades can be harder to achieve, there's something particularly approachable about Johansson's buttery-blonde shade. The best part about her Emmys red carpet look? If you choose to cop the actor's blonde hair and blend the shade with dark, exposed roots, you'll get to skip those bimonthly trips to the salon and let your natural color shine.