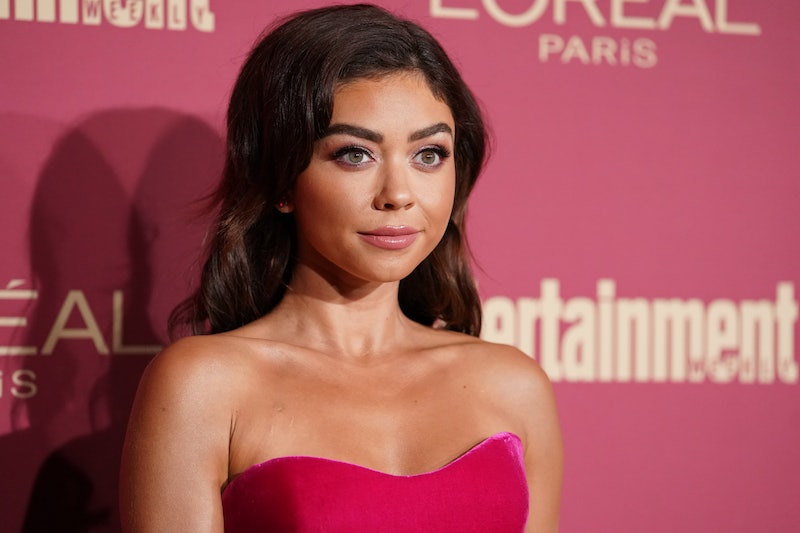 Sarah Hyland is all of us trying to dye our hair in quarantine. The goal was to color it pink — a bubblegum-like shade similar to Dua Lipa's, maybe, or a pretty rose gold à la Julianne Hough — but what she got instead was a rich purply magenta, erring-on-red shade. Naturally, Sarah Hyland blamed her hair whoopsie on Venus retrograde.

Since the quarantine began, there's been an inexplicable spike in unicorn-like hair colors. Shortly after Elle Fanning dyed her signature peroxide peachy pink, Hilary Duff went full-on aqua. More recently, Ruby Rose looks to have dipped her buzz cut in a bowl of Cap'n Crunch Cotton Candy cereal. But if there is one official breakout color of the stay-home era, it's pink.

Pastel, rose-gold tints are the quarantine winner. In addition to Lipa, Hough, and Fanning, Sarah Michelle Gellar, Jennifer Love Hewitt, and Ricky Martin (truly "livin' la vida loca") have debuted DIY pink dye jobs in isolation. Hyland thought she'd give the trend a whirl, too, but the stars just didn't align for her this time.

What she wound up with instead is a cross between red and purple — the perfect representation of magenta — which actually worked out in her favor after all.

In April, Hyland's fiancé, Bachelor Nation alum Wells Adams, documented her buzzing his hair on an Instagram Story, so it's no surprise that she'd facilitate a bold hair change on herself.

She did, however, specify in her own Instagram Stories that the pink is only temporary and advised against self-bleaching. "That scares me," she wrote. In the fresh-faced selfie she posted to her grid, Hyland tagged Nine Zero One hairstylists Riawna Capri and Nikki Lee, who showed their support of the dye job gone wrong (along with Vanessa Hudgens) in the comments.

The actor will no doubt nurse those curls back to brunette health with Root Rituals — the hair and scalp care brand she has recently partnered with and claims to be using religiously while in quarantine — but until then, let's all just bask in this red hair bliss until Venus retrograde is over.