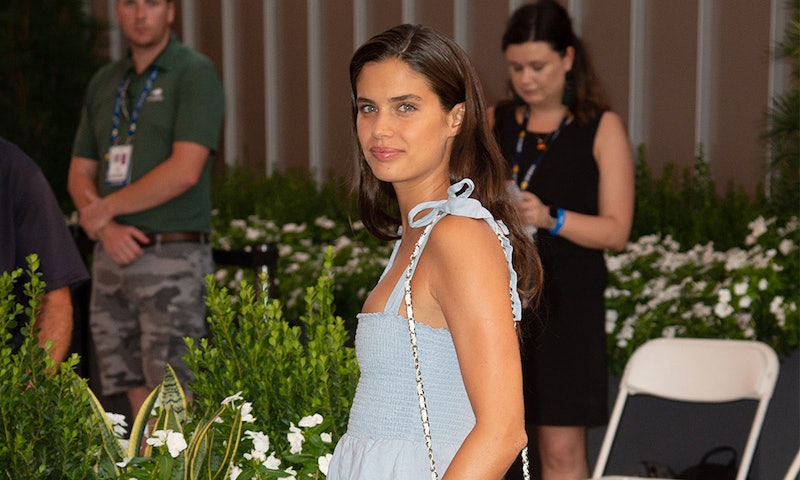 Considering the 2018 US Open has spanned New York City's hottest weeks, celebrities brave enough to face the heat have been tasked with finding a comfortable (read: breathable) outfit to cheer on their favorite players. And as we reach the tournament's final days, there's no doubt that the arena has witnessed some of the very best street style moments of the summer. A personal favorite? Sara Sampaio's blue Reformation dress — which, lucky for you, is still in stock right this very second.

Summer is on its last leg, but Sampaio makes a convincing case for keeping your midi dresses in rotation until the weather officially turns. The model arrived at Arthur Ashe Stadium on Sept. 4 in Reformation's powder-blue Canyon Dress, which feature a smocked bodice, strap ties, and a relaxed fit throughout the waist.

The best part? The Canyon Dress is 100% linen, meaning its incredibly lightweight and totally equipped for hot, sweaty days.

The Victoria's Secret Angel paired the dress with a white Chanel crossbody bag and a pair of understated white sandals to match. As for hair and makeup, Sampaio kept things casual: soft, subtle waves, rosy cheeks, and a dewy complexion.

Although Sampaio opted for a breezy, warm-weather look, the Canyon Dress can fit into your fall wardrobe with ease, too. Ditch the sandals for a pair of sneakers or mid-calf boot, and add an extra layer with your favorite blazer or a fitted leather jacket. Better yet, you can take this dress from a casual day of work to happy hour by throwing on a pair of heeled mules.

As Sampaio was photographed sitting in the bleachers with her boyfriend Olivier Ripley, she showed off the versatility of the dress by letting the straps hang loose on the sides of her arms.

But Sampaio isn't the only celebrity to bring her style A-game to the US Open. Two other Victoria's Secret Angels were in attendance on Sept. 4: Gigi and Bella Hadid.

The sisters usually differ in their style choices — while Bella opts for edgier, unique pieces like oversized coats and bulky dad sneakers, Gigi sticks to a streamlined closet that consists of more than a few pairs of jeans and statement boots.

But Gigi and Bella sat in the sidelines of the US Open in uncharacteristically coordinated outfits. The models wore oversized, collared shirts — both unbuttoned and hanging off of their left shoulders. To top off the look, the Hadids opted for matching gold hoop earrings and updos (a sleek bun for Bella and a messy ponytail for Gigi).

Suffice it to say, the celebrity ensembles at the US Open have proved style doesn't have to be compromised in the heat. But when the tournament comes to an end on Sept. 9, expect to see celebrities reach for their coats and sweaters. Fall is approaching whether we like it or not.