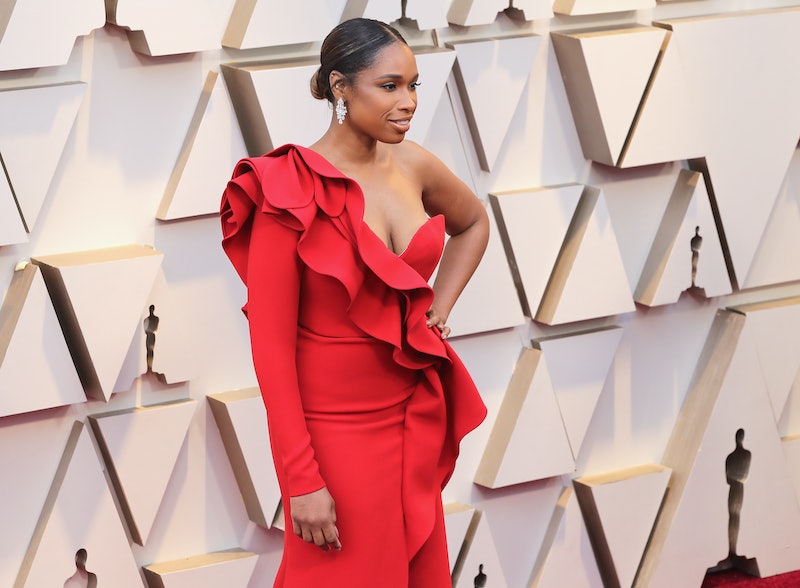 While sparkles and sleek silhouettes are typically the name of the game at any awards show red carpet, it seems ruffled Oscar gowns were the theme at this year's ceremony. And, from the looks of it, the bolder the better. Just ask your favorite celebrities.

Yes, in lieu of sequins and diamonds, A-listers like Jennifer Hudson and Gemma Chan took a walk on the softer side with ethereal ruffled frocks in vibrant shades that read decidedly spring.

Probably one of the most unforgettable instances of the night came from Hudson. The singer and actor showed up to the Academy Awards in a classic red one-shoulder Elie Saab gown with large cascading ruffles that ran across and down the bodice.

Another noteworthy look came from Gemma Chan, who has consistently served up some memorable red carpet moments all season. The Crazy Rich Asians actor stunned in an electric pink sleeveless Valentino dress that featured a Victorian-inspired ruffled high collar.

The evening's honorable mention was delivered by country singer Kacey Musgraves, who was the big winner at the Grammy Awards earlier this month. The Album of the Year recipient went for total princess vibes in a voluminous Giambattista Valli gown that featured head-to-toe ruffles.

Second in line for the most ruffled-up look of the night came from Linda Cardellini, who wowed in an ultra-dramatic fuchsia Schiaparelli dress. The bold gown featured a high-low silhouette and plunging neckline that only added to the drama. The Green Book actor definitely came to play.

Want to see who else rode the ruffle train? Ahead, see all the gowns that featured a little (or a lot of) fringe. Bring on the spring inspiration.

The singer, who performed her Oscar-nominated song "I'll Fight" from the RBG movie, dazzled in a fiery red ensemble.

The red carpet darling did not disappoint in this pink (which is now her signature shade) ruffled dream.

The Creed actor served up retro vibes in this peplum number.

Always one for a dramatic dress, Musgraves opted for the design house that never fails to deliver just that.

It's hard to decide what's more eye-catching — the fuchsia shade, plunging neckline, or sea of ruffles.

The Roma actor's gown was as romantic as they come.