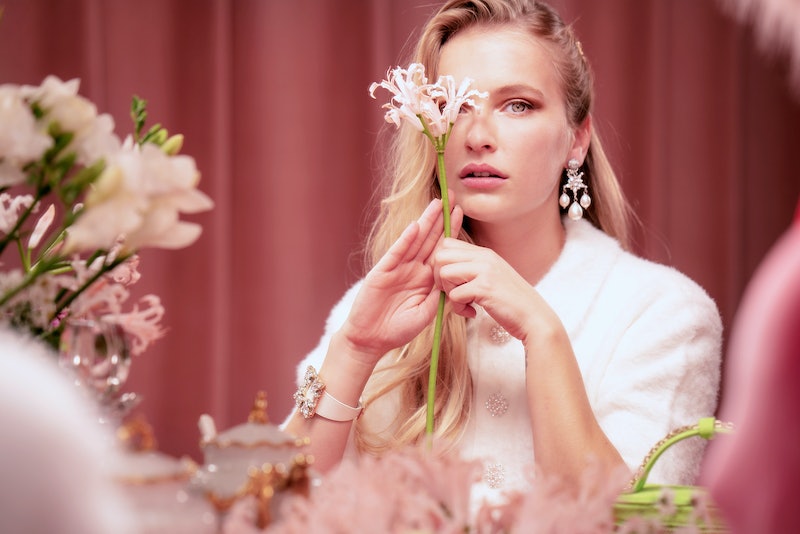 In the mid-19th century, Parisian writer Charles Baudelaire wrote "Les Bijoux" — a poem that captured the timeless interplay between a woman and her jewelry. "For me, [it] represents the sensuality of a woman," Camille Razat tells TZR over email. The French actor, whose role in Emily In Paris propelled her into the recent spotlight, is now taking a turn at modeling — and her latest venture is revisiting that seminal, centuries-old poem. For Roger Vivier's Spring/Summer 2021 jewelry line, creative director Gherardo Felloni is paying homage to the Baudelaire piece — and introducing Razat as its muse. Each piece serves opulent glamour, with a wink — and they're all arriving just in time for the holidays.

Launching on Nov. 23, the collection is filled with treasures (hair clips, bracelets, and crowns included) that reconcile Vivier trademarks with 19th century design elements. Inspired by the shape-centric gardens at Le Château de Versailles, the Broche motif (a Felloni original) features sparkling crystals in baguette and marquise cuts. Then, Vivier updated its line of leather bracelets with the Strass buckle, with crystals and pearls arranged into a floral halo for a distinctly feminine feel. The pièce de résistance? Its velvet-trimmed Bouquet Strass crown, which features hundreds of crystals, hand-arranged by Roger Vivier artisans into rows of flowers. As for how it feels to wear them: "It felt amazing. I felt like a princess, a glamorous warrior of our time," shares the Emily In Paris actor. "I felt powerful with them, almost like an armor."

To properly do justice to "Les Bijoux" — which Baudelaire wrote about a young female actor — Felloni felt that Razat was the perfect fit. “She is a young actress, a great emerging talent,” said Felloni in an official release. “She’s a mysterious beauty, fresh and lively at the same time.”

Shop key styles below, and be sure to relish them ahead of the spring months, during the holidays.