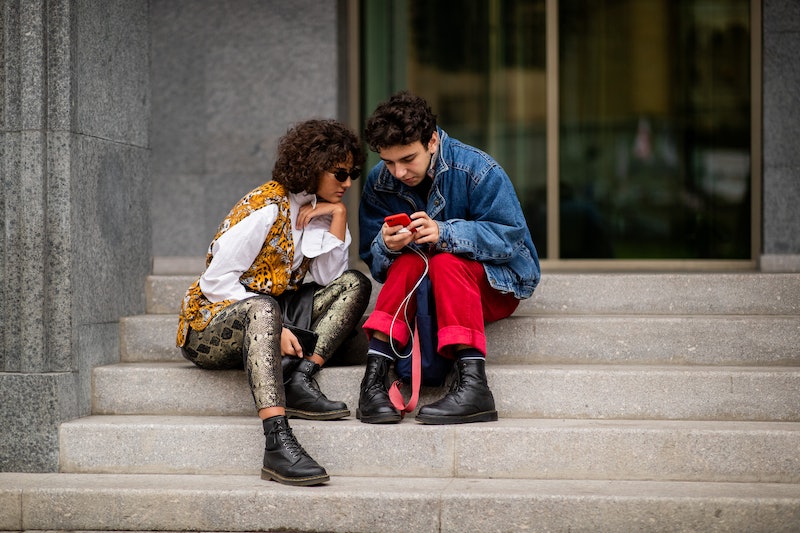 These days, you’d be hard-pressed to find anyone who isn’t using social media in one way or another. If they’re not on Instagram, they’re on Facebook, Twitter, Tumblr, or another platform designed to connect and collaborate. And with so many people sharing their lives (even the most minute details), it’s pretty common to see them sharing their relationships on social media, as well. Which begs the question: While nothing is really off-limits in the digital frontier, should there be? Are there certain sacred things like your personal/romantic life that should be, well, personal? And what does it really say about your bond with your significant other if every detail is out there for the world to see?

“The first thing to note is that social media, in and of itself, does nothing,” says Dr. Patrick Wanis, life coach and human behavior and relationship expert. “It’s how we choose to use social media that will determine the impact it has on a relationship, be it positive or negative.”

According to a 2014 study by Pew Research Center, tech-related issues in relationships are indeed a thing, with 42 percent of couples reporting being distracted by their phones, 18 percent reporting arguing over time spent online, and eight percent reporting problems with how a partner spends their time online. Because it’s been about five years since this study was conducted and considering the fact that society is currently in an Insta-saturated state, it’s safe to say these percentages have most likely changed (and probably increased).

This topic of social media's impact on romance is a big one, way bigger than will fit in a single article or piece of reading material. This is mainly due to the fact that there are so many aspects to social media and how it relates or touches your relationship. Maybe it most impacts you in that it’s a huge distraction for you and/or your partner (and a constant presence at the dinner table) or maybe it’s the primary vehicle in which you and your partner express your love and appreciation for each other (hello, mushy Insta posts).

The subject is also complex in that only you can truly understand or know the health of your relationship and if and how social media even impacts it or plays a role. But, for the sake conversation, a couple relationship experts were tapped to discuss just how the social phenomenon of tweeting, posting, tagging, and commenting can take its toll on your romantic situation — and, more importantly, four key tips on how to make it work for you and your significant other ... and not against.

News flash: At its core, social media is designed to be used for, that’s right, social purposes. And while platforms like Twitter, Instagram, and Facebook are absolutely used to help you connect and communicate with others, in recent years they have become extensions of oneself … and sometimes how one defines oneself. According to Dr. Wanis, there are four ways in which we abuse our use of social media: “One, we have made it an extension of our identity," he says. "Two, we use it as a way of masking who we are. Three, we use it as a form of escape. Four, we use it to solve our problems.”

Social platforms have become the way people voice their opinions and deliver daily (and sometimes hourly) updates of their lives and relationships. For many, this looks like constant praise and imagery of your partner, which, again, is not a terrible thing. However, if these posts are a means to validate your bond to other people and create a picture-perfect image of your relationship, that’s when things get sticky. “Many people use it as a way to validate themselves to get attention, to get approval, to get acceptance, to get likes, and even to get recognition and appreciation,” says Dr. Wanis. “[...] When you post on social media you give away your power, you allow it to determine how you feel about yourself. Be careful of giving away your power to anyone or anything outside of you.”

So how do you keep your power in check? First and foremost, a little pre-post introspection is key, says. Dr. Wanis. “Everything begins with self-awareness,” he says. “Before you post a message on Facebook, ask yourself: Why do I want to put this up? Second, ask yourself: What do I really want from this? Three: Am I just trying to convince everyone of something and am I trying to create a fake self-image?” Now, if you feel positive about that post of you and your partner or that complementary shout out, go for it. Again, there’s nothing wrong with a little Insta PDA. But there’s nothing wrong with a gut check now and again, either.

Piggybacking off of the above notion, it’s important to remember that nothing beats real-life interaction and communication with your partner. If texting, commenting, or direct messaging is becoming a primary form of communication or even conflict, it might be time to rethink your social media use.

“What we find is there’s still a sense of anonymity,” says Dr. Wanis. “[...] There’s a huge difference in confronting someone in person and writing it over a text or voicemail because it’s a perceived wall. It’s so easy to do that because whatever you write back to me, I can choose to ignore or block you. Whereas, if I’m in front of you then I have to listen to what you have to say.”

But, at the end of the day, face-to-face communication is usually best, especially when having important conversations. While using social media and text to check in and keep tabs on one another is all well and good, making them constant vehicles of discussion is never a good idea. Make sure all meaningful conversations and interactions happen in person to keep that connection and bond between you strong and authentic.

This might seem like an obvious one but, according to Leslie Shore, speaker, author, and communications professor, you’d be surprised how many people use social media to discuss discourse or disappointments in their relationships. And while authenticity in life and online is always crucial, oversharing can be problematic.

“If you’re wondering if you should post, don’t,” says Shore. “If there is a single negative word or overtly personal stuff in regards to your relationship that is finding its way in, don’t do it. If the person on the other end would be left wondering, “What do they mean by that?” don’t post it.” Shore explains that this includes passive aggressive messaging via memes and such.

If you and your partner are having issue or if you’re unhappy in your relationship, getting the public at large involved will only perpetuate the problem and, inevitably, could lead to a breakup. Utilize the voice you have and communicate your problems directly to your partner and prove that you respect the bond enough to deal with things in person.

Put The Phone Away When You're Together

Even if you’re posting isn’t harmful, excessive social media consumption can still do some serious damage, if you don’t watch yourself. “It can draw energy away from the relationship,” says Dr. Wanis. “Instead of giving energy to your relationship, you’re now spending hours and hours or even moments (precious moments) on social media. You’re with your partner somewhere and instead of giving them your undivided attention and quality time, you’re now taking a photo in a matter of a few seconds, then spend minutes posting the photo and making comments about it, then reading the comments. And you've taken the attention away from the people who are in your very presence.”

Nothing shows someone you love and respect them and value their time like being completely present. Sitting and engaging in meaningful conversation and looking at each other instead of the phone is about as romantic as it gets, folks. Even if you do want to capture a place or moment with your partner on social media, try waiting until the end of your time together, a moment alone, or the end of the day to do so. And when in doubt, take Shore’s advice: “When you are sitting with the person you are in a deep relationship with the cell phone should be off!”