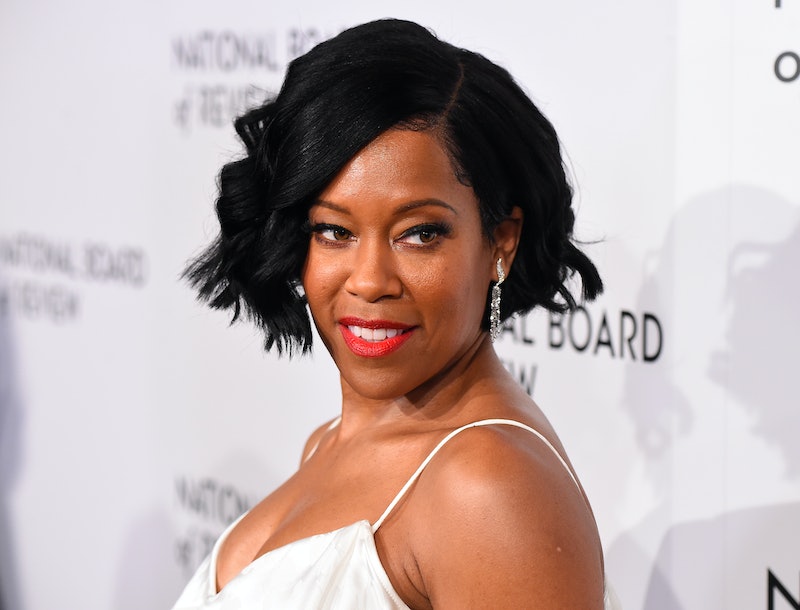 Actors and producers of your favorite HBO shows appeared at the network's Television Critics Association Press Tour in Los Angeles on Weds., and aside from dishing out deets on hit series and future projects, they delivered a range of winning looks as well. Regina King's Prada suit was a prime example of summer sophistication done right, stealing the show at the discussion for forthcoming superhero drama, Watchmen.

The Academy Award-winning actor delivered on summertime vibrancy thanks to the multicolored set which featured red-and-blue flowers throughout. Accented by a bright smile and purple waist-length box braids, the cheerful look lent a dose of exuberance to the panel discussion. The 48-year-old opted for metallic silver stilettos, statement rings and large hoop earrings to complete the look.

It's been a big year for the actor, as she snagged an Oscar for her supporting role in If Beale Street Could Talk, the first of her decades-long career. And now, King is set to star in the aforementioned nine-episode comic book adaptation which will confront white supremacy in non-grandiose terms, according to executive producer Damon Lindelof. King will play a police officer in the series, but she was clearly leaning into her femininity with the vivid look alongside her colleagues onstage.

From high-waisted trousers to oversized blazers, work-ready staples have remained a consistent go-to for the fashion set all year long. And scorching temps haven't deterred tastemakers from suiting up, either, with everyone from Emily Ratajkowski to Tracee Ellis Ross making a case for summer suiting in a range of hues and patterns.

King stepped out of the box with her printed version, demonstrating how to put a femme twist on the menswear-inspired ensemble, and there are so many similar options across the web. Finish summer strong with The Zoe Report's selection of the actor-approved look, ahead.

Tulip season has already come and gone, but you can keep the vibrant blooms alive with the help of this floral suit from Erdem.

Go from the office to dinner seamlessly with this royal blue printed set by John Zack.

This is actually a painterly animal print style, but the salmon pink hue brings the same sense of femininity.

Pair this chic skirt suit with loafers and a headband for an adorable work-ready outfit.

Opt for leather slides and a wooden bag to complete this breezy ensemble from DVF.