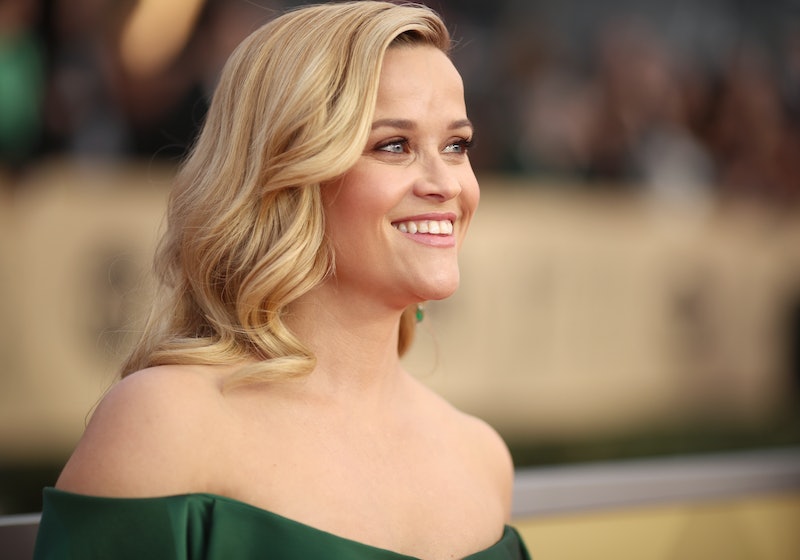 The arrival of springtime often inspires a chop of some sort, but what about a full-blown switch-up? Cast members of Apple’s forthcoming series The Morning Show were spotted in New York City on Weds., and Reese Witherspoon's brown hair was a surprise departure from her signature light blonde locks. The Academy Award-winning actor strolled in the sunshine alongside cast mate Billy Crudup, her updated sandy brown hair offering a little beauty inspiration for warmer months to come.

Even though MGM confirmed that Legally Blonde 3 is officially set for a 2020 release date, it looks like Witherspoon is legally brunette for the time being. Slightly more red than the 43-year-old's natural dark hair color, the medium brown hue made the actor's bright blue eyes extra noticeable.

This is likely a temporary look for whatever character Witherspoon will play in Apple's highly anticipated series, but it's clear she has no problem pulling off a whole spectrum of shades. Since emerging on the acting scene at just 15 years old, the New Orleans native has cemented herself as a true beauty chameleon, wearing every shade from red (A Wrinkle in Time) to chocolate brown (Walk The Line), back to her signature light blonde hue.

It's no secret that it-girls have been going to great lengths to maintain Daenerys-inspired platinum blonde amidst Game of Thrones mania, but Witherspoon's updated look makes a case for warmer tones this spring. Whether you're a natural blonde looking to switch things up in a major way, or a brunette finally ready to revert back to the dark side after years of harsh dye jobs, now could be the time to take the plunge on a big change.

To get the most out of your springtime update, add The Zoe Report's roundup of must-have products to your cart and give your hairstylist a ring.

Ward off unwanted copper hues with this toning shampoo that will keep your color rich between salon visits.

Repair hair dye-induced damage with this revitalizing conditioner that will leave locks smooth long after you leave the salon.

Add some serious shine to your hair routine with this luxe essential oil, including apricot, sweet almond, and rosemary.