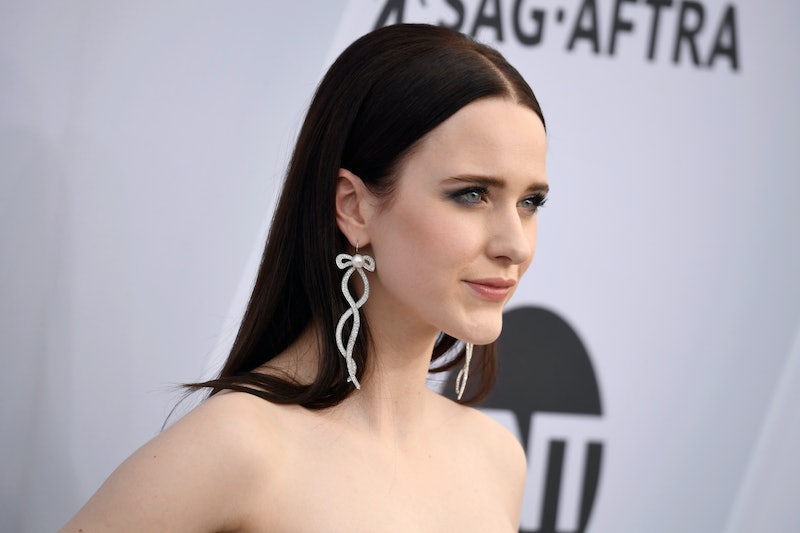 It's not easy to describe Rachel Brosnahan's exact hair color. Some would argue it's a chocolatey brown while others have called it jet black. In certain lighting, it even looks red. One thing Rachel Brosnahan's hair hasn't been called is blonde, until now.

Makeup artist Lisa Aharon posted a photo of the actor's look for the opening night of Broadway show What the Constitution Means to Me earlier in the week, and it revealed a very different hair color than what you're used to seeing on The Marvelous Mrs. Maisel.

The 28-year-old has apparently traded in her signature super-dark hair for a lighter strawberry blonde just in time for spring. She debuted the new shade in soft, natural-looking waves, pulled half-up and with face-framing pieces tucked behind her ears.

Aharon, who was responsible for Brosnahan's pink lip and smoky eye that night, tagged Bumble and bumble colorist Kitty Greller in the post, as well as hairstylist Matthew Monzon. Brosnahan herself posted a photo after the event, and fans were quick to notice the new blonde hue in the comments.

Her hair is proof that a bold hair transformation really can change a person's overall look.

Brosnahan's dark hair has always been a stark contrast to her fair skin, but her new golden blonde color seems to give her complexion a whole new glow. While the shade looks brand-new to fans, the actor should be used to it. She was born a blonde, after all.

The actor recently participated in Us Weekly's "25 Things You Don't Know About Me" column, where she revealed that her dark hair was actually never real. She started dying it when she was 16 years old. "I feel more myself with dark hair," she said in the 2018 interview. Now, just four months later, she's left the dark side for a new summery hue.

If you're feeling inspired to go lighter, too, then these products are for you.

After dying your hair, a color-preserving shampoo is key. This one is designed to battle brass, hydrate, and enhance shine.

Colored hair needs extra protection, so before you go styling it with all those hot tools, work in a dollop of this serum specifically for blondes. Hyaluronic acid helps to strengthen while edelweiss flower softens and calms.

For Brosnahan's casual waves, opt for this weightless texturizing spray.

Get texture, tint, and dry shampoo all in the same formula with this multipurpose leave-in spray.