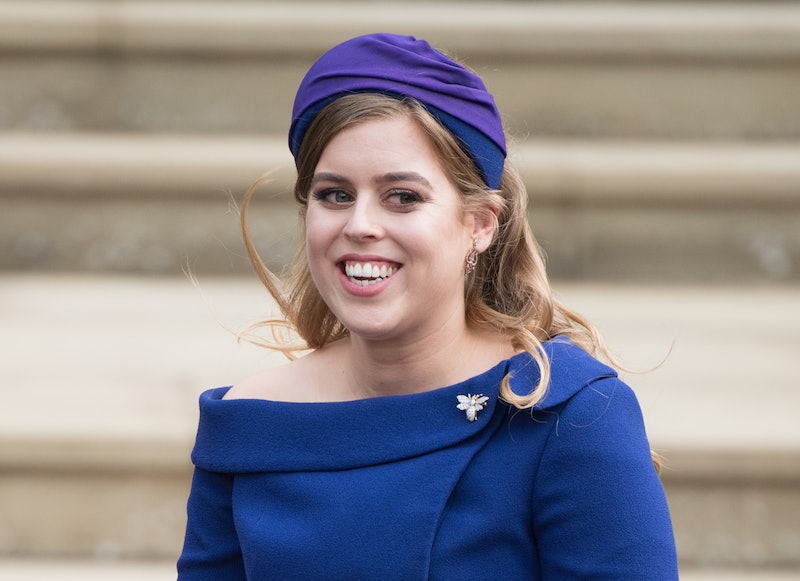 There's a theme transpiring among the current generation of royal brides and, in particular, their hairstyles. After reportedly having only a single hair trial prior to her and Prince Harry's widely broadcast ceremony, Meghan Markle waltzed down the aisle wearing a 45-minutes-and-done messy chignon — who could forget? Now, taking cues from Kate Middleton's big day nearly a decade ago, Princess Beatrice attended her secret wedding with a half-up hairstyle that was blissfully (and surprisingly) down to earth.

As with any royal wedding, that of the eldest York sister (who many remember by her over-the-top fascinator moment at Prince William and Kate Middleton's 2011 nuptials) and Edoardo Mapelli Mozzi was full of familial nods and hidden symbolism. She wore a loaned gown from the queen's collection, for starters.

But although sentimental gestures abound, Princess Beatrice's July 17 union also had its share of simplicity. Besides the reduced guest list (courtesy of COVID-19), the 31-year-old also debuted one of the most minimalistic, DIY-friendly bridal hairstyles in royal history.

Her signature strawberry tresses were pulled back casually into a not-too-fussy half-up look that you could almost compare to Kate Middleton's memorable bridal style, were it not for the wispy pieces that floated freely under the heirloom tiara. It was the perfect contrast to the Queen's stately jewels and treasured gown.

Low-key hair hasn't always been embraced by royal brides, of course. The 94-year-old monarch herself wore tidy curls to her own ceremony in 1947, and in 1981, Princess Diana turned up to St. Paul's Cathedral with a pared-back perm. Even Middleton's bridal hair was impeccable — not a strand out of place — but Markle's undone updo in 2018 was evidence that things were about to change. Princess Beatrice's sister, Eugenie, wore a similarly lax low bun to her wedding later that very year.

Finally, Princess Eugenie's half-up, half-down moment solidified it: Casual (dare you say, messy) is the bridal hair trend du jour, so you can go ahead and flaunt your Sunday updo down the aisle, or wherever, without reserve.